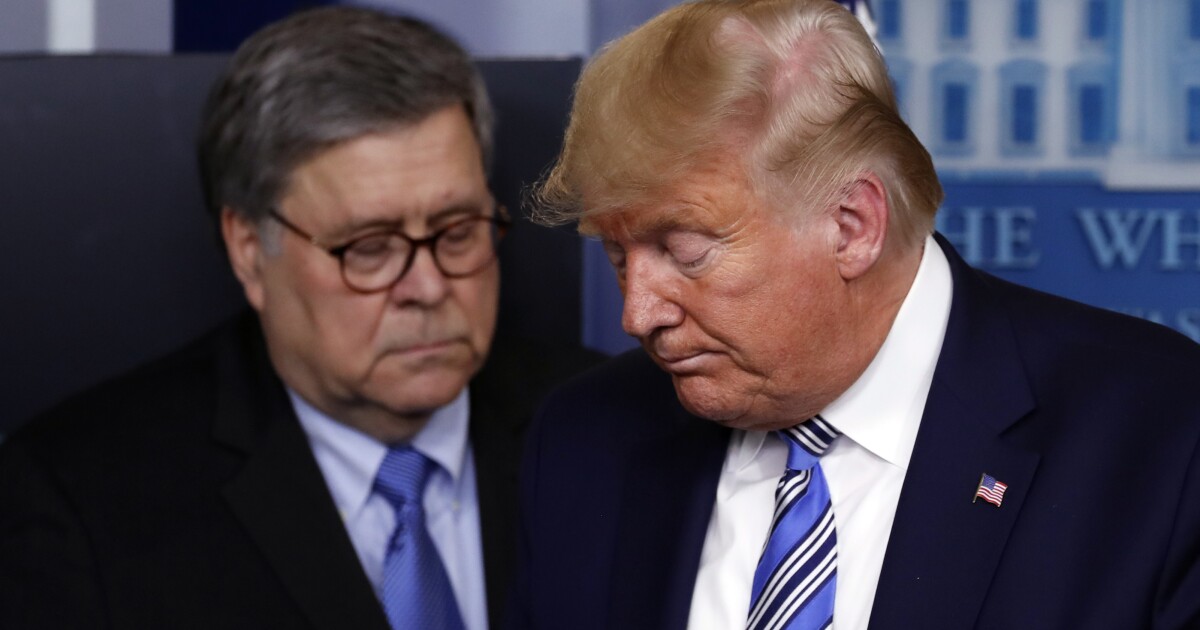 Barr's letter announcing he would be leaving his position this month said he will depart on Dec. 23.

“I am greatly honored that you called on me to serve your Administration and the American people once again as Attorney General,” Barr wrote. “I am proud to have played a role in the many successes and unprecedented achievements you have delivered for the American people. Your record is all the more historic because you accomplished it in the face of relentless, implacable resistance.”

Last week, it was revealed that President-elect Joe Biden’s son, Hunter, is under federal criminal investigation related to his foreign business dealings, including in China, and Trump asked on Wednesday, ”Why didn’t the Fake News Media, the FBI and the DOJ report the Biden matter BEFORE the Election.” The Wall Street Journal reported on Thursday that, according to a source, Barr “has known about a disparate set of investigations involving Hunter Biden’s business and financial dealings since at least this spring” and “worked to avoid their public disclosure” during the 2020 election to avoid interfering with the vote.

Barr also revealed earlier this month that the Justice Department has not found evidence of extensive voter fraud that could create a different outcome in the 2020 presidential race, contradicting claims made by Trump and his allies that the race was “rigged” or “stolen” and that Biden didn’t really win. The attorney general said that “to date, we have not seen fraud on a scale that could have affected a different outcome in the election.”

Trump’s legal team responded by claiming that “there hasn’t been any semblance of a Department of Justice investigation.” And, when asked if he had confidence in Barr a couple days later, Trump said to “ask me that in a number of weeks from now” and that “they should be looking at all of this fraud.”

And in early December, Barr revealed he had quietly appointed U.S. Attorney John Durham to serve as a special counsel back in October, tasked with investigating any violations of law related to the inquiries conducted by the FBI’s Crossfire Hurricane operation and, later, special counsel Robert Mueller’s team. Trump lamented in a Facebook video this month that “Durham didn’t want to go after these people … before the election, so who knows if he’ll ever even do a report.”

Durham, a federal prosecutor from Connecticut, has been looking into a host of issues related to the origins and conduct of the investigation into Russian meddling and alleged collusion with the Trump campaign, and his criminal inquiry has netted one guilty plea already, with ex-FBI lawyer Kevin Clinesmith admitting to fraudulently altering an email to say that former Trump campaign associate Carter Page was “not a source” for the CIA as the bureau pursued flawed Foreign Intelligence Surveillance Act surveillance against him relying upon British ex-spy Christopher Steele’s discredited dossier.

Barr responded to DOJ Inspector General Michael Horowitz’s report by saying it “makes clear that the FBI launched an intrusive investigation of a U.S. presidential campaign on the thinnest of suspicions that, in my view, were insufficient to justify the steps taken.”

Biden has not said whether he will allow Durham to finish his investigation.

Federal prosecutors told the court in February that they recommended Roger Stone receive up to nine years behind bars. But after Trump tweeted that he “cannot allow this miscarriage of justice,” the Justice Department suggested a less severe sentence. The four prosecutors on the case withdrew as the department walked back the “unduly high” sentence recommendation. Barr called the Stone conviction a “righteous prosecution” and denied that the president's tweet influenced the Justice Department's actions — but Barr did complain that such tweets make “it impossible for me to do my job.” Trump eventually granted Stone clemency.

The Justice Department moved to dismiss the charges against Lt. Gen. Mike Flynn in May, and Barr said then that “I’m doing the law’s bidding. I’m doing my duty under the law as I see it.” Trump granted Flynn a pardon earlier this month.

Biden’s attorney general pick will take over amid calls from some Democrats for Trump to be investigated after he leaves office, with the Trump administration, including the Justice Department, ramping up pressure on China and as Barr has scheduled federal executions during the transition period while Biden promises to end capital punishment.

Biden was asked by NBC’s Lester Holt this month about the possibility of investigating Trump after he leaves office, and the former Obama vice president suggested he wouldn’t direct his attorney general to do so.

“I will not do what this president does and use the Justice Department as my vehicle to insist that something happen,” Biden said. “There are a number of investigations that I’ve read about that are at a state level — there’s nothing at all I can or cannot do about that.”

Much of Trump’s presidency was consumed by the Trump-Russia investigation, which was launched in July 2016 and escalated following Trump’s firing of FBI Director James Comey and the appointment of Mueller as special counsel.

Mueller’s 448-page report, released in April 2019, said the Russians interfered in 2016 in a “sweeping and systematic fashion,” but the special counsel “did not establish that members of the Trump campaign conspired or coordinated with the Russian government.” The special counsel also laid out 10 possible instances of Trump obstructing justice but did not reach a conclusion. Barr and Rod Rosenstein, who was deputy attorney general at the time, concluded Trump had not obstructed justice.