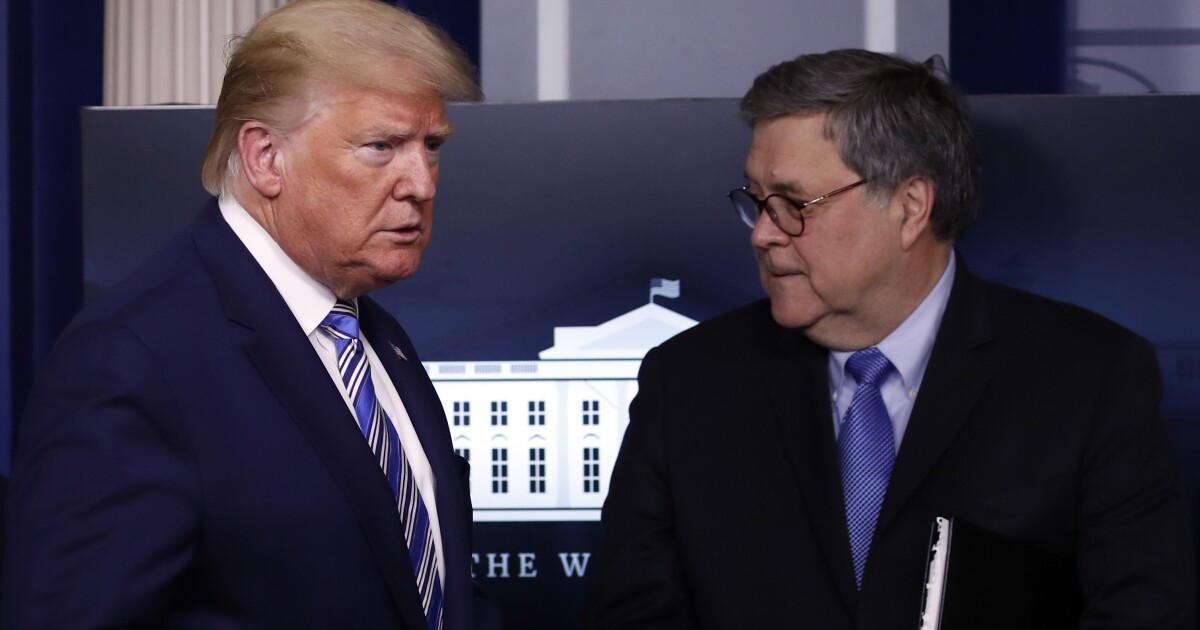 Attorney General William Barr said the Justice Department has not found evidence of extensive voter fraud that could create a different outcome in the 2020 presidential race, contradicting claims made by President Trump and his allies that the race was “rigged” or “stolen” and that President-elect Joe Biden didn’t really win.

“To date, we have not seen fraud on a scale that could have affected a different outcome in the election,” Barr told the Associated Press on Tuesday. He also appeared to shoot down allegations made by one-time Trump legal team lawyer Sidney Powell, who has repeatedly claimed that millions of votes were flipped from Trump to Biden by voting machines nationwide. “There’s been one assertion that would be systemic fraud and that would be the claim that machines were programmed essentially to skew the election results. And the DHS and DOJ have looked into that, and so far, we haven’t seen anything to substantiate that,” the attorney general said.

Barr said the Justice Department has looked into a variety of voter fraud claims and expressed frustration with calls for the agency to investigate the election.

“There’s a growing tendency to use the criminal justice system as sort of a default fix-all, and people don’t like something they want the Department of Justice to come in and ‘investigate,’” Barr said, adding, “Most claims of fraud are very particularized to a particular set of circumstances or actors or conduct. They are not systemic allegations, and those have been run down — they are being run down. Some have been broad and potentially cover a few thousand votes. They have been followed up on.”

“With all due respect to the Attorney General, there hasn’t been any semblance of a Department of Justice investigation,” Giuliani and Trump campaign senior adviser Jenna Ellis said. “We have gathered ample evidence of illegal voting in at least six states, which they have not examined. We have many witnesses swearing under oath they saw crimes being committed in connection with voter fraud. As far as we know, not a single one has been interviewed by the DOJ. The Justice Department also hasn’t audited any voting machines or used their subpoena powers to determine the truth.”

They added: “Nonetheless, we will continue our pursuit of the truth through the judicial system and state legislatures, and continue toward the Constitution’s mandate and ensuring that every legal vote is counted and every illegal vote is not. Again, with the greatest respect to the Attorney General, his opinion appears to be without any knowledge or investigation of the substantial irregularities and evidence of systemic fraud.”

As Trump-allied insiders distanced themselves from election fraud allegations made by Powell, and national security officials within the Trump administration said they had seen no evidence of her claims, the president's legal team announced the attorney had no direct role in their efforts.

At a press conference in Washington, D.C., last month, Powell claimed Dominion Voting Systems software was created “at the direction” of the late Venezuelan President Hugo Chavez to steal elections in his country and that the machines “can set and run an algorithm that probably ran all over the country to take a certain percentage of votes from President Trump and flip them to President Biden.” Trump has repeatedly tweeted about Dominion to cast doubt on the election.

Dominion has denied being involved in a vote-switching scheme. Dominion spokesman Michael Steel rebutted these claims, saying that “this is a nonpartisan American company” and “it is not physically possible for our machines to switch votes from one candidate to the other.”

Christopher Krebs, the former director of the Cybersecurity and Infrastructure Security Agency, defended the integrity of the 2020 election during an interview on CBS’s 60 Minutes that aired the weekend.

“I have confidence in the security of this election because I know the work that we've done for four years in support of our state and local partners. I know the work that the intelligence community has done, the Department of Defense has done, that the FBI has done, that my team has done. I know that these systems are more secure. I know based on what we have seen that any attacks on the election were not successful,” Krebs said over the weekend, adding, “There is no foreign power that is flipping votes. There's no domestic actor flipping votes. I did it right. We did it right. This was a secure election.”

Trump, who fired Krebs after his agency put out a joint statement saying the 2020 contest was the most secure in U.S. history, tweeted his displeasure again Sunday.

” 60 Minutes never asked us for a comment about their ridiculous, one sided story on election security, which is an international joke,” Trump claimed. “Our 2020 Election, from poorly rated Dominion to a Country FLOODED with unaccounted for Mail-In ballots, was probably our least secure EVER!”