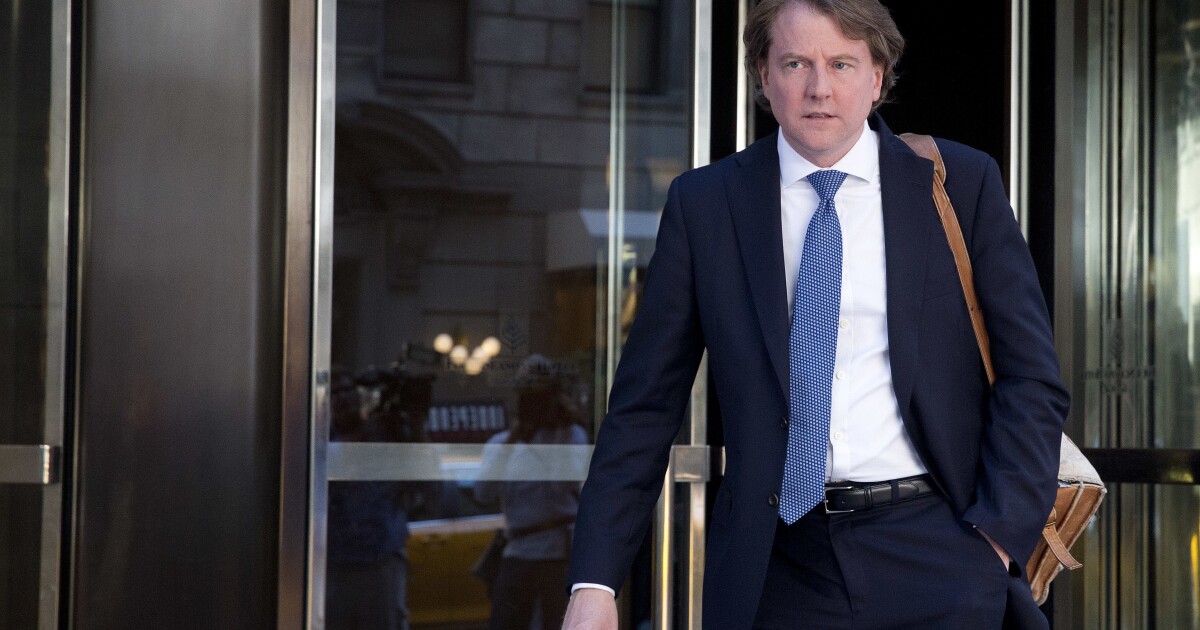 The Biden administration and House Democrats are at odds over whether to proceed with a Trump-era fight to subpoena the testimony of former Trump White House counsel Don McGahn.

The Justice Department asked the U.S. Court of Appeals for the District of Columbia to call off a hearing set for Tuesday while signaling little appetite to prolong the two-year legal battle related to special counsel Robert Mueller’s investigation into links between former President Donald Trump's 2016 campaign and Russia.

“Defendant-Appellant respectfully moves to postpone oral argument so that the parties can explore an accommodation that could resolve this dispute,” Courtney Dixon, on the appellate staff for DOJ’s civil division, said in a Wednesday filing, adding, “Since briefing was completed in this case, there has been a change in Administrations. The new Administration wishes to explore whether an accommodation might be available with respect to the Committee’s request. Discussions among the relevant parties have begun, and the new Administration believes the parties would benefit from additional time to pursue these discussions.”

“McGahn’s testimony remains essential to the Committee’s investigation and its consideration of remedial legislation,” Letter said, adding that “given this history and the already lengthy delays that have prevented the Committee from obtaining McGahn’s testimony, further delay in this case would be inappropriate.”

“DOJ seeks to postpone the argument after a change in Presidential Administrations to explore the possibility of resolving this case without further litigation. We appreciate the Biden Administration’s efforts to settle this case, and we have actively participated in those efforts. But we do not believe that postponing the argument will improve the prospect of a settlement or serve the interests of judicial efficiency or fairness to the parties,” Letter said, adding that “the delay to the Committee from postponing the argument could be substantial, and could prevent the Committee from securing McGahn’s testimony for much of the 117th Congress, just as it was prevented from securing that testimony for almost the entire duration of the 116th Congress.”

The original McGahn subpoena, which he and the Trump administration resisted, came before the Ukraine-related impeachment investigation into Trump, but Democrats said they saw testimony from the former White House counsel as essential to the process despite the articles of impeachment centering on events that took place after McGahn left the White House.

After President Biden defeated Trump and Democrats maintained control of the House of Representatives, House Judiciary Committee Chairman Jerry Nadler reissued a subpoena in December and said that his committee still had “a right to and need for” McGahn’s testimony. He argued that “this Court has already held that the House has Article I authority to obtain information in service of its legislative function” and criticized “the Trump Administration’s attempt to hamstring that power.”

Rep. Jim Jordan, who was the top Republican on the committee, blasted Nadler’s decision, saying he was “disappointed that you are continuing to misuse limited Committee resources on your fanatical obsession with attacking President Donald Trump.”

The Justice Department argued Wednesday that the case implicates “nerve-center constitutional questions” related to the constitutional prerogatives of both Congress and the presidency. Dixon argued that there is “extraordinary cause” to postpone next week’s hearing because “it is in the interest of all concerned to allow sufficient time and opportunity for the Branches to seek a compromise in this case.”

The full federal appeals court revived the House Democratic effort in October, extending the legal fight beyond the November election. A now-reversed ruling in August by a three-judge panel had been a win for the Trump administration because the White House blocked McGahn from testifying by citing “absolute immunity” from congressional subpoenas. Depending on how the hearing goes, McGahn may be forced to testify after all.

McGahn, who served as counsel from Trump's inauguration through his resignation in October 2018, is mentioned 71 times in Mueller’s 448-page report. Mueller concluded that the Russians interfered “in a sweeping and systematic fashion” during the 2016 presidential election, but he “did not establish” any criminal conspiracy between the Kremlin and the Trump campaign.

Democrats sued McGahn in August 2019, claiming to need his testimony on Mueller's inquiry, particularly the 10 instances of possible obstruction of justice that Mueller outlined in his report. Then-Attorney General William Barr and then-Deputy Attorney General Rod Rosenstein concluded justice had not been obstructed.

When Mueller's office asked McGahn about allegations that Trump had pressured him to fire the special counsel, “McGahn responded that he would not refute the press accounts because they were accurate in reporting on the President's effort to have the Special Counsel removed,” according to Mueller's report.

In November 2019, U.S. District Judge Ketanji Brown Jackson ruled in favor of the Democrats, although that was quickly appealed.