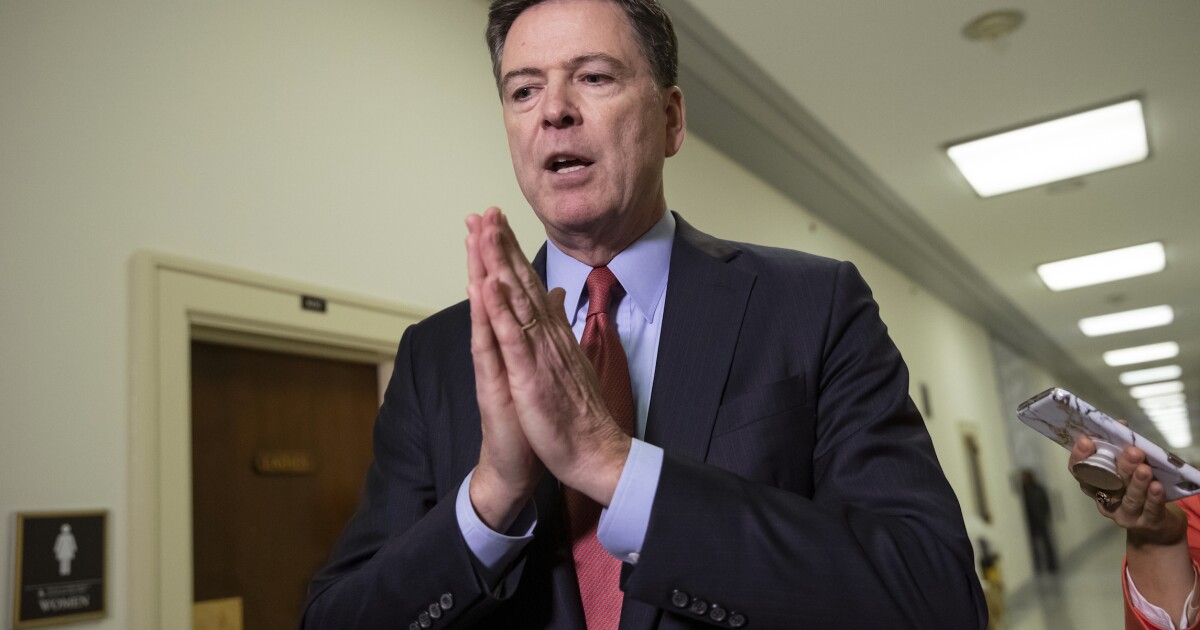 President-elect Joe Biden’s Justice Department would “have to” prosecute President Trump if he pardons himself, according to fired FBI Director James Comey.

The hypothetical was posed during a BBC Newsnight interview on Wednesday as Comey embarks on a media tour for his new book, Saving Justice: Truth, Transparency, and Trust. Comey previously said the incoming president should consider doling out a pardon for Trump and that Biden's attorney general, a role for which Biden has picked Judge Merrick Garland as his nominee, should not pursue criminal investigations into Trump.

“That would be an unusually dumb thing even for him to do. Because it’s unsettled as to whether a president can do that — I believe a president can’t, and it would be a lawless act. It would prompt the Department of Justice to have to prosecute him so that they could litigate this question about whether that’s an effective release from criminal liability,” Comey claimed. “So, in a way, by trying to give himself a shield, he would be inviting the sword of the Department of Justice.”

The former FBI chief did not explain why he thought this would force the Justice Department to take such an action.

In the midst of the inquiry by special counsel Robert Mueller after Comey was fired from the FBI in May 2017, Trump tweeted in 2018 that “as has been stated by numerous legal scholars, I have the absolute right to PARDON myself, but why would I do that when I have done nothing wrong?” A Justice Department legal opinion written in 1974 concluded that “under the fundamental rule that no one may be a judge in his own case, the President cannot pardon himself.” Legal experts disagree on whether it would be constitutional for a president to pardon himself, and it has never happened nor been tested in court. Such a pardon, if it occurred, would not protect against state charges.

“I still think that, on balance, the best decision for the United States of America would be not to grant Donald Trump the platform that prosecuting him would give him for every day for three or four years in the nation’s capital as United States v. Trump appeared on television every day,” Comey said on Wednesday. “I think the better thing for our country and for our new president is to push Donald Trump to the side a bit.”

When pressed on why he wouldn't support charges filed against someone he thinks committed crimes, Comey added: “Look, I know it’s an odd thing for me to say given my career, and given that the guy has been saying I should be in jail for the last four years, but I’m trying to make a judgment about what’s best for the country. I obviously think he belongs in jail, but I don’t think pursuing that is in the best interests of the entire nation.”

Mueller’s special counsel report, released in April 2019, said the Russians interfered in 2016 in a “sweeping and systematic fashion” but “did not establish that members of the Trump campaign conspired or coordinated with the Russian government.” Trump was never charged with a crime. Mueller also laid out 10 possible instances of obstruction of justice without reaching a conclusion, and then-Attorney General William Barr, along with then-Deputy Attorney General Rod Rosenstein, determined there was insufficient evidence to establish that Trump obstructed justice.

Comey’s book pointed to President Gerald Ford pardoning his predecessor, Richard Nixon, in the wake of the Watergate scandal, writing that “Ford likely lost his election bid as a result, because there was a widespread hunger to hold a criminal president to account, but history has judged Ford to have been wiser than his time.”

Manhattan District Attorney Cyrus Vance has been locked in a lengthy legal battle with Trump that went to the Supreme Court as he seeks a host of financial documents and tax records from Trump as part of its investigation into the Trump Organization and how it handled hush-money payments made to women who said they had sex with Trump, claims which the president denies. New York Attorney General Letitia James is investigating Trump Organization properties and transactions, and New York County State Supreme Court Judge Arthur Engoron ruled last month that her office should be given access to at least some of the Trump Organization’s information.

Biden was asked in late November about investigating Trump after he leaves office, and the former vice president replied, “I will not do what this president does and use the Justice Department as my vehicle to insist that something happen. There are a number of investigations that I’ve read about that are at a state level — there’s nothing at all I can or cannot do about that.”