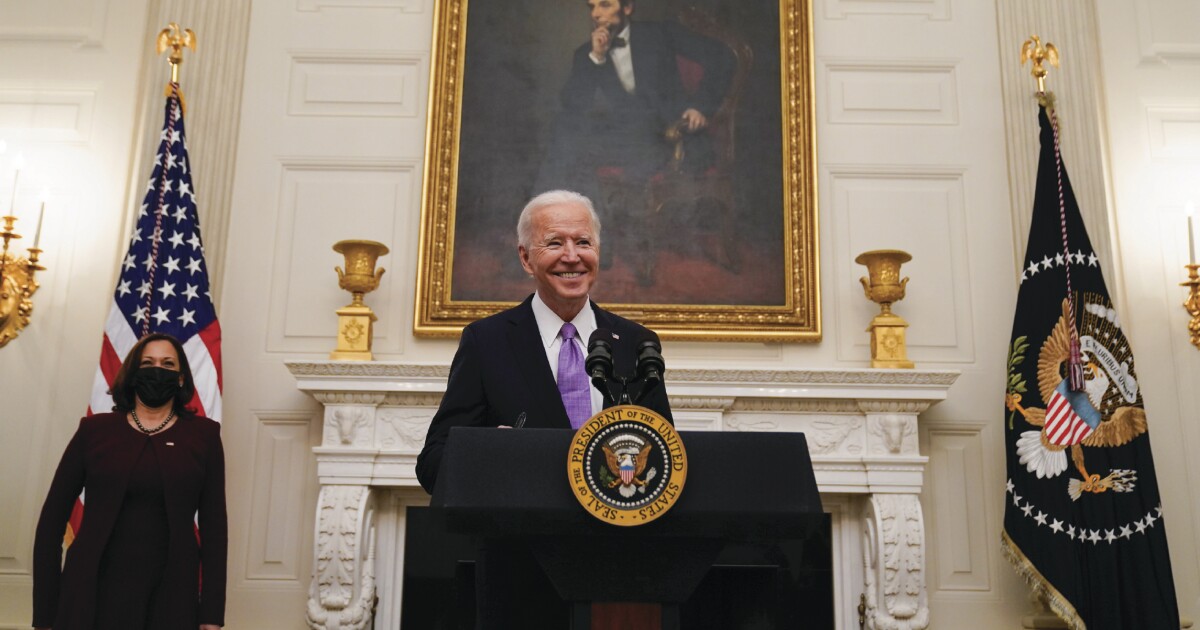 President Biden was only in office for a few hours before he struck down one of former President Donald Trump’s most controversial policies: the travel ban affecting seven majority-Muslim countries labeled as terror risks by the previous administration.

It was part of 17 executive actions Biden undertook by nightfall, a number that only grew during his first full day as president. White House press secretary Jen Psaki quickly outlined some of these edicts in her first press briefing.

“He directed the secretary of Homeland Security, in consultation with the attorney general, to take all appropriate actions to preserve and fortify DACA, which provides temporary relief from deportation to Dreamers, young people who were brought to this country as children,” she said. “The president also put an end to the Muslim ban, a policy rooted in religious animus and xenophobia. He signed a proclamation effective immediately halting further funding or construction of the previous administration’s border wall and terminating the so-called national emergency used to wastefully divert billions for wall construction.”

This list highlights one thing Biden has in common with Trump: a commitment to undoing his predecessor’s acts. Former President Barack Obama made this easy when Biden was vice president by utilizing his “pen and phone” — that is, doing so much through executive orders. Trump did the same, making much of his handiwork equally vulnerable to reversal by a subsequent administration.

Biden’s inaugural address itself was an extended reprimand of Trump and his combative approach to national politics. “There is truth, and there are lies, lies told for power and for profit,” he declared. “And each of us has a duty and a responsibility as citizens, as Americans, and especially as leaders, leaders who have pledged to honor our Constitution and protect our nation, to defend the truth and defeat the lies.”

The new president seemed to be aiming his remarks at voters who hoped the new administration would be a cleansing of the last, especially the suburbanites seeking a reprieve from polarization who helped him secure his Electoral College victory.

Psaki also tried to contrast her approach to the podium with the more antagonistic one taken by her Trump-era predecessors after a reporter asked whether she saw herself as primarily an advocate for the administration.

“As I noted earlier, there will be moments when we disagree, and there will certainly be days where we disagree for extensive parts of the briefing … but we have a common goal, which is sharing accurate information with the American people,” she said. “If the president were standing here with me today, he would say he works for the American people.”

She said their goal was to “bring transparency and truth back to government.”

The pandemic also loomed. Biden instituted a mandate for face masks on federal property. He once again showcased Dr. Anthony Fauci and announced a return to the World Health Organization. But here, too, Trump’s shadow was evident. The ubiquitous mask-wearing and grim tone when speaking of COVID-19 — Biden predicted deaths would top 500,000 — were a contrast with Trump’s unmasked happy talk. It was Trump who cut ties with WHO and sidelined Fauci in his final months. The pandemic was a major reason Biden beat Trump in the first place.

Biden axed Trump’s 1776 Commission and began to pursue a number of racial justice initiatives within the federal government. He rolled back a Trump LGBT policy with an executive order affirming that Title VII of the Civil Rights Act of 1964 bans discrimination on the basis of gender identity, in line with Trump-appointed Justice Neil Gorsuch’s opinion in the Supreme Court’s Bostock v. Clayton County ruling. He redoubled efforts on climate change even when it conflicted with Trump’s deregulation.

Some of these policies were controversial, as was Biden’s panning of the Trump administration's COVID-19 vaccine rollout. The administration nevertheless hopes its calls for civility and unity get it off to a less-rocky start.

“If the new president was successful on his Inauguration Day, he'll get a brief honeymoon to heal the nation and close the festering wounds,” Democratic strategist Brad Bannon said. “Whether the honeymoon lasts months, weeks, or hours is anybody's guess.”