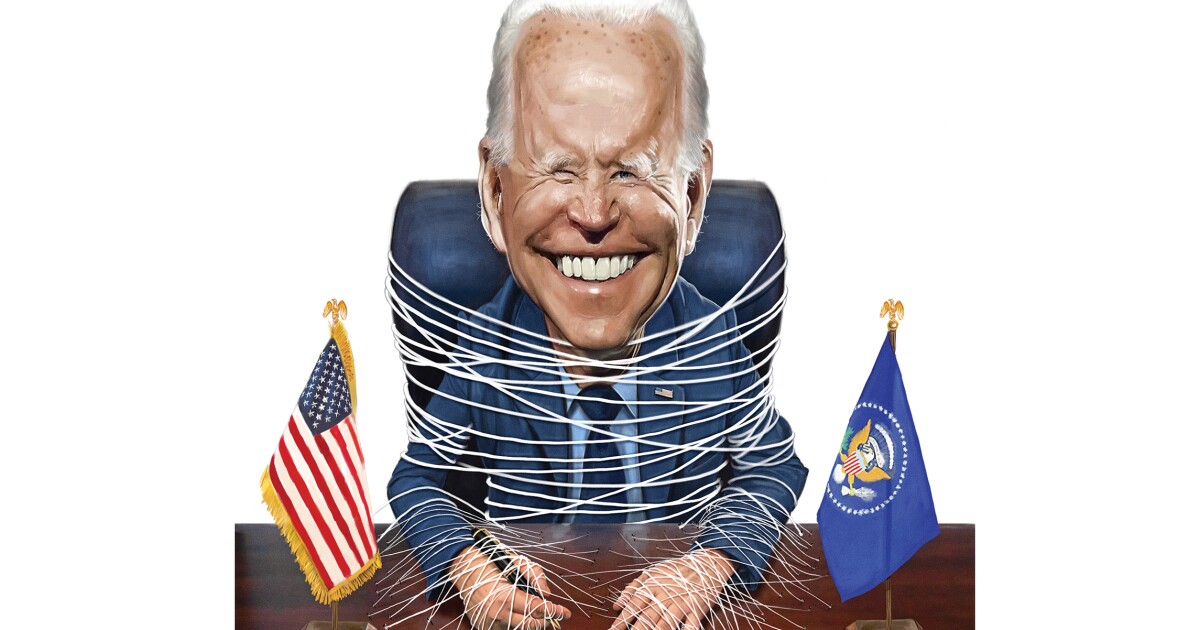 The book recounts his childhood and his staggering 39 years in politics up to that point (by the end of his vice presidency, it was 47). In it, he explains away the plagiarism scandal that effectively ended his 1988 presidential run by saying his words felt “absolutely authentic.” At the very least, he learned a lesson: ”You should not run for president because tactically you can win,” Biden writes. “The questions you have to ask are why you’re running for president and what will you do when you are president. You shouldn’t run until you know the answers to those questions.”

Biden has run again for president, proving that a third time’s the charm, seemingly without really answering those questions. Democratic primary voters nominated him not because of any policy agenda or vision for the country, but because polling consistently showed he had the best shot at defeating President Trump.

Biden’s own campaign hammered this point almost daily for months, while rivals such as Sen. Bernie Sanders highlighted their healthcare reforms and tax plans. Tactics, to paraphrase his book, were central to Biden’s entire rationale for running.

To his campaign’s credit, Biden’s confidence in this strategy kept him coolly on-message. When the press were writing him off after his humiliating placement in the Iowa caucuses, Biden’s wife turned to voters and laid out what this election was really about: beating Trump.

“I know that not all of you are committed to my husband, and I respect that, but I want you to think about your candidate, his or her electability, and who’s going to win this race,” she said in New Hampshire, just days before the state’s primary.

Voters found that message unconvincing at the time. Neither did it resonate in Nevada, where Biden hardly campaigned at all and earned just over 20% of the vote, compared to Sanders’s 46.8%. But Biden stayed on-message, knowing for all that Democratic voters spoke about racial justice, income inequality, and healthcare access, the most important thing was humiliating the president.

And as the race turned to his favor following the South Carolina primary, it was not because of any eureka moment by voters who finally understood what Biden’s America would look like. It was because he had proven his ability to win over black voters — a crucial constituency that is responsible for having put every Democrat in the White House for the last 20 years. Once that became clear, the rest of the Democratic Party’s voters fell in line; Biden had passed the implicit test. Other candidates, namely Sanders, naively believed ideas would ultimately win out in the end over Democrats’ simple desire to remove Trump from office.

Following that primary, former President Barack Obama swiftly sought to end any remaining debate about the future of the Democratic Party. He jumped on the phone with candidates such as Pete Buttigieg and Amy Klobuchar and explained why their path to the nomination was now closed. They’d have more leverage to get Cabinet positions if they dropped out now and endorsed Biden before the pivotal Super Tuesday primaries. And that’s what they did.

With the nomination wrapped up, Biden’s toughest days were presumably ahead. Not only were journalists who literally cheered for Sen. Elizabeth Warren during one Democratic debate from the press room now theoretically forced to turn their attention to an elderly man they believed to have insufficiently woke racial sensibilities and no plan to eliminate all their college debt, he would be forced to create a meaningful contrast with a president who oversaw record-breaking unemployment numbers, rising wages, and no new wars.

But right around the time Biden’s nomination seemed wrapped up, the medical and political communities finally began to accept the seriousness of the looming COVID-19 pandemic. That handed Biden a new argument as soon as the old one expired: He could now say he was running for president to rescue the country from a plague exacerbated by Trump’s incompetence.

The pandemic had the added effect of giving Biden reason to run the campaign from his basement, meaning the average reporter covering his campaign could enjoy the libations at various three-star hotels in Wilmington, Delaware, with any semblance of a substantive policy debate vanishing.

Instead, Biden would be asked by the press what, in the face of thousands of people dying, he thinks the government’s response says about Trump’s soul or whether Biden was sufficiently angry at the president’s supposed years-old remarks about deceased soldiers just remembered by anonymous sources. The traditional merging of the press and the Democratic nominee’s campaign, this time, meant a referendum not on policy but on “empathy.”

Voters awarded Biden a comfortable popular victory on top of a substantial one in the Electoral College. To the extent one can trust exit polls, Biden’s victory had little to do with just about anything he said or did on the campaign trail. Of the 71% of voters who said their vote constituted support for a specific candidate, just 46% said so for Biden, compared to 53% for Trump. Only 49% said they held a favorable opinion of Biden, with 43% saying the same for the president.

This dynamic was reflected in Biden’s complete lack of coattails in down-ballot races, where voters dropped the “empathy question” and made sure to repudiate the policies pushed by the rest of Biden’s party. At the Senate, House, and local levels, voters overwhelmingly rejected Democratic candidates, many of them incumbents, suggesting that the party paradoxically faces a more serious branding crisis than the GOP. Despite predictions from polling shamans, the Democratic margin in the House will shrink to its lowest level since the Obama administration. In private phone calls with Democratic leadership, lawmakers complained about the damage the defund-the-police movement has done to the party. Majority-minority California voted almost as a center-right state and struck down ballot initiatives to revitalize affirmative action and expand the franchise partially to 17-year-olds.

Despite the best efforts by Democrats to tie Trump to the Republican Party, voters appeared to know better. The GOP did not lose control of a single state legislature after Election Day and made gains in swing states such as Pennsylvania, Iowa, North Carolina, and New Hampshire. After hundreds of millions of dollars, often in dark money, flooded these local races from Democratic groups, the stain left by a summer of race riots did nothing to reassure voters that giving the Left local control of government was a good idea.

That brings us back to Biden’s initial question of what exactly a candidate will do when he’s elected president. To win a race, it seems the answer can be as easy as “the opposite of the other guy.” And in a time of a deadly pandemic, that can sound pretty convincing. The problem for Biden is that voters seemed to send the message that they like a lot of what the GOP does as well.

When he enters office in January, Biden seems unlikely to be able to deliver “the most progressive administration since FDR,” as he often promised weary Sanders supporters; neither, should Mitch McConnell have his way, will he be able to deliver one as liberal as Obama's or even Bill Clinton's, both of whom enjoyed unified government after winning their elections. Odds of statehood for Washington, D.C., and Puerto Rico have dropped precipitously, and Democrats could struggle to get a single appeals judge confirmed, forget stacking the Supreme Court, if the GOP retains control of the Senate.

Any fig leaf to the party’s most radical wing, such as making Sanders secretary of labor, is likely to remain a dream, even though Biden was warming to the idea as the election drew closer. Despite his former boss’s ban on the practice, a preliminary list of Biden’s staff appointments includes at least 40 lobbyists. His future chief of staff, Ronald Klain, has enjoyed a rich career of bouncing back and forth between various Democratic administrations and campaigns, lobbying, and stints in finance.

One advantage of running a campaign based entirely on its utility in the general election is that it keeps expectations low. Deep down, progressives know they can’t truly feel betrayed when they see former Goldman Sachs partner and for-profit-college board member Gary Gensler as a leading candidate for running the Securities and Exchange Commission. Neither can run-of-the-mill liberals feel frustrated about gridlock in Congress after they insisted that only Biden the Pragmatic Centrist could win. In fact, they were more right than they knew: Nominating Biden not only didn’t spur a blue wave; it might have prevented a red wave.

The Biden campaign’s strategy of hiding running mate Kamala Harris appeared to have backfired when it came to igniting enthusiasm for the ticket, instead doubling down on utility. On the one hand, Biden wanted to send the message that he was willing to elevate the progressive future of the Democratic Party, but he also made it clear in the face of mockery from Trump and other Republicans that he would be the one in charge. The California senator has held press conferences infrequently since her nomination. The only real way to get access to the future second-most powerful person in the world was to cough up thousands of dollars at a fundraiser. There remains little evidence that Harris was an electoral asset in any sense to Biden’s ticket, but her deep ties to the California Democratic millionaire class helped usher in the money to create the most expensive presidential campaign in history.

The public remains skeptical of the choice. Her favorability ratings on Election Day remained underwater, and Biden hardly let her speak that night or in the subsequent days when it became increasingly obvious they had won. Harris’s use, particularly as Biden will likely find himself at the mercy of Senate Republicans, has all but been spent.

There will be much to scrutinize Biden over in the years to come. Scandals related to his son, Hunter Biden, will likely find new life should the GOP keep the Senate. His plan to tackle the coronavirus pandemic no way substantively differs from Trump’s. The economy remains the most damaged since the Great Depression, and the Democratic Party sees either a cure in Obama-era technocratic liberalism or a cynical opportunity to usher in a new era of a massively expanding welfare state to compensate those who may never see their previous jobs come back. A bipartisan consensus has emerged against China, creating one of the most serious foreign policy challenges since the Cold War.

But now that House Democrats are weakened and Senate centrists empowered in a close-to-even upper chamber, Biden will have more decision-making power relative to his left flank than previously thought. So what will he do? He got away with leaving that question unanswered so far. Come January, that ceases to be an option. Joe Biden has been in public life for a half-century, and we’re about to find out why.