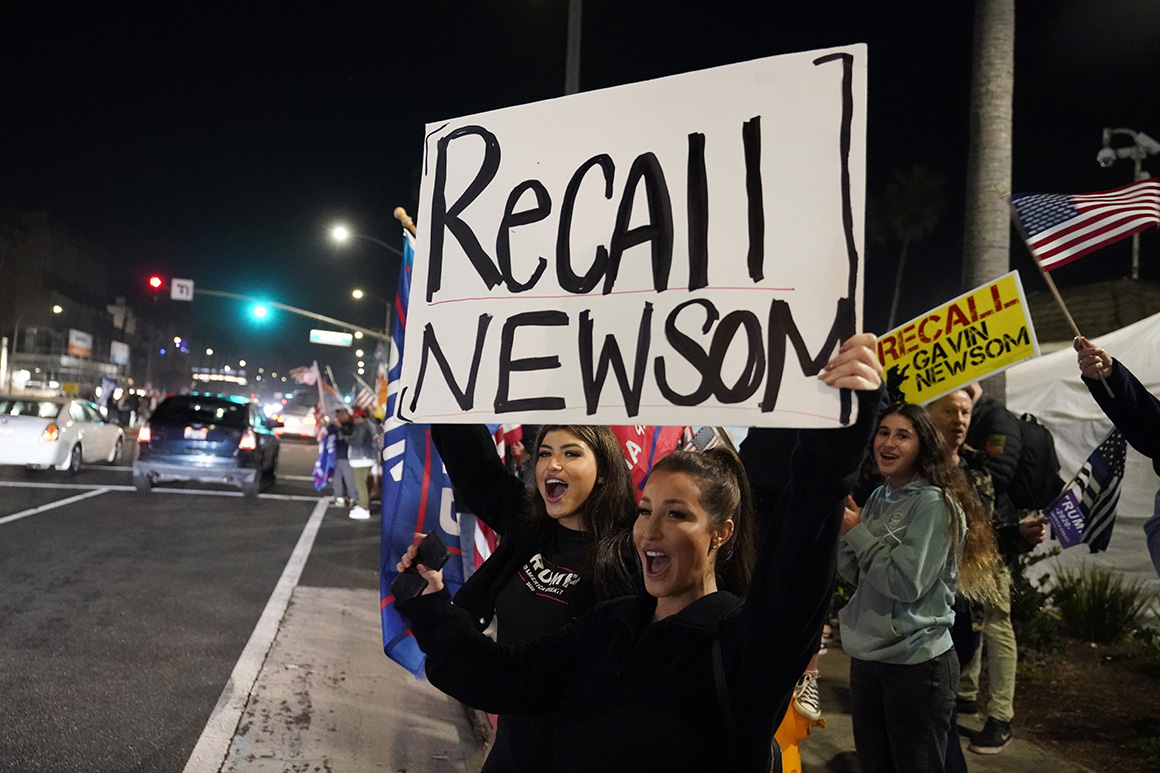 The message must be “about why even unhappy Californians should not sign these poisonous petitions,” he said in an interview. “Our collective action should be all about reducing signatures that would create this political chaos.”

But time is running out, he conceded. “It’s really about the next 30 days,” when the recall campaign must show evidence they've collected 1.5 million valid signatures.

Newsom spent months focusing on reining in the coronavirus pandemic and working with local officials to reopen — and re-close — businesses and places of worship. He’s also pushed hard, yet mostly unsuccessfully, to reopen schools. While Newsom and the Democratic Party tried to keep the messaging on coronavirus, his opponents ramped up the effort to recall him, approaching the required number of valid signatures in a state with a low bar for instigating a gubernatorial recall.

Lt. Gov. Eleni Kounalakis is now asking Democrats to stand against the recall. California voters elect their lieutenant governor separately from the top office, so she's not in jeopardy should Newsom be ousted. But Kounalakis sees it as a cynical GOP attempt to sidestep a regular election cycle.

“Republicans see this quirky opportunity to slip a Republican governor into the bluest state in the union,” she said in an interview. “And I think they are daydreaming.”

But Matt Shupe, a GOP strategist, said that Democrats and Newsom are clearly flailing as they attempt to counter the successful drive.

“California, in all types of ways, is in a really dire situation right now,’’ Shupe said. The recall, he added, is a way to “fix the state … with someone to vote for, not just vote against.”

Newsom last week teased an agreement with teachers and their unions to reopen schools but on Tuesday said no agreement is ready. The inability to reopen schools may become another political liability for the governor as he works to preserve his job.

Republicans haven't won a statewide election in California since 2006. That year, Gov. Arnold Schwarzenegger, himself the earlier beneficiary of the state's only gubernatorial recall, won re-election after making a sharp turn toward the center. Democrats now hold a 46 percent to 24 percent voter registration advantage over Republicans, and the GOP continues to trade second place with voters who register with no party preference.

Democrats have supermajority control of both houses of the state Legislature in addition to every constitutional office, an unprecedented level of dominance in California — a state that gave rise to Gov. Ronald Reagan and Sen. Richard Nixon before the two Republicans entered the Oval Office.

Republicans face long odds in a straight-up gubernatorial race, and Newsom trounced GOP businessman John Cox in 2018 by a 62-38 margin. But a recall affords more opportunity as a free-for-all contest where a candidate can win with a smaller plurality under the right circumstances.

It is starting to feel too late for Democrats to stop the recall train. Organizers say they have collected 1.5 million signatures, but need a few hundred thousand more to ensure they have enough that are valid. They have a month left, and they're beginning to receive national reinforcements, most notably $250,000 last week from the Republican National Committee, as POLITICO first reported.

Joining Glazer and Kounalakis, both moderate, business-friendly Democrats, are some of the state’s most prominent progressive voices — even those who have had some significant policy differences with Newsom.

“It’s not Gavin who’s on the ballot — it’s California,” said Rep. Ro Khanna (D-Calif.), the Silicon Valley member who served as the national co-chair for Bernie Sanders’ presidential campaign — and who has an enthusiastic following among liberal Democrats in the state.

Progressive activist Joseph Sanberg, a wealthy entrepreneur who has previously talked about a run for public office — including governor — said such connections suggest an attack “on California values.”

“This recall construct … is an anti-democratic vessel for unknown, secretive big money groups to take control of state politics,’’ he charged. “We can't have a system where a dozen unknown, wealthy, unaccountable people can hijack state politics — and that's really what's unfolding,” he said.