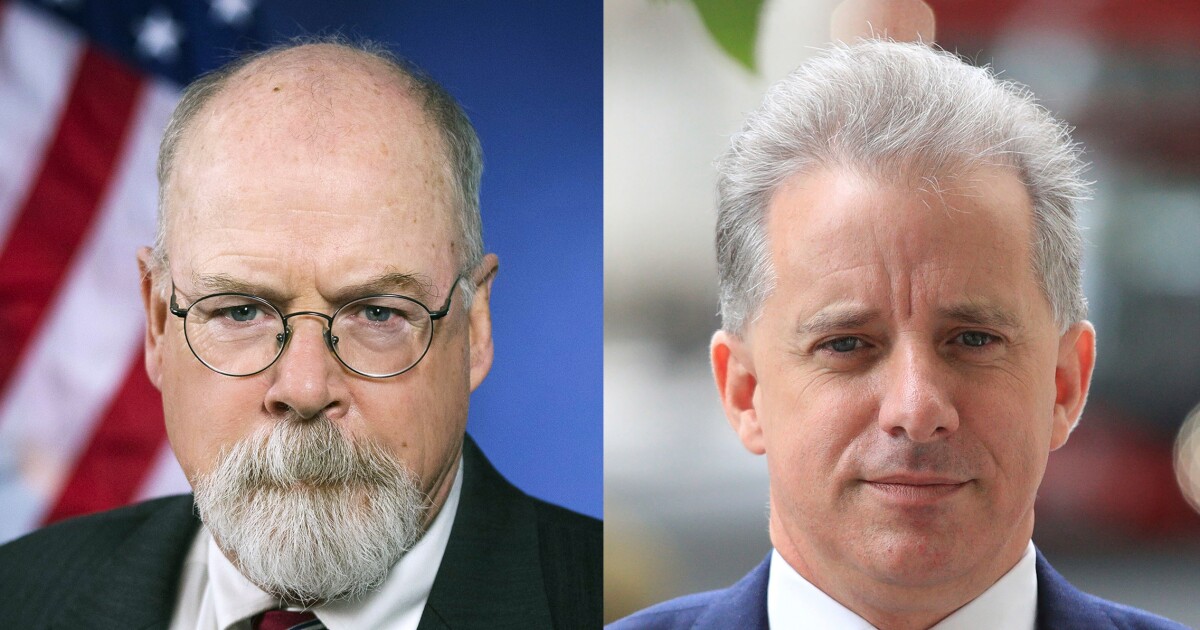 Christopher Steele refused to hand over to U.S. Attorney John Durham notes the former MI6 agent took of meetings with the FBI in July and October 2016, as the now-special counsel scrutinizes whether the bureau improperly disclosed classified information to the former MI6 agent, according to a report.

An article published by Politico on Saturday stated that Durham, appointed by Attorney General William Barr to investigate wrongdoing by the Trump-Russia investigators, “has been searching for evidence that FBI agents mishandled classified information” and “specifically zeroed in on records belonging to” Steele, citing “court records and people familiar with his investigation.” Durham is reportedly focusing on notes that Steele took of his FBI meetings in early July 2016 at his Orbis Business Intelligence office in London and in early October in Rome. Those notes were evidence in a defamation lawsuit brought against Steele by owners of the Russian Alfa Bank, in which Steele testified this year.

The outlet said Durham “enlisted a British law firm over the summer to take Steele to court in London, aiming to compel him to turn over” the notes, and that “Durham believes Steele’s notes could contain evidence that FBI agents improperly disclosed classified information about Crossfire Hurricane.”

The new piece stated “a sealed court filing” in July showed London-based attorney John Fordham “moved on behalf of” the Justice Department “to lift a protective order on evidence” in the Alfa lawsuit. Harwood “approached lawyers for Steele’s firm” by “asking for the notes directly, since they had been used as exhibits in the trial, but when the law firm declined to disclose who its client was, Orbis’ attorneys in turn declined the firm’s request.” The outlet said Harwood’s efforts “have so far failed” and Steele “has not been compelled to turn over his notes.”

Fordham did not respond to the Washington Examiner’s request for comment.

DOJ Inspector General Michael Horowitz’s late 2019 report on the Russia investigation criticized the Justice Department and the FBI for at least 17 “significant errors and omissions” related to the Foreign Intelligence Surveillance Act warrants against onetime Trump campaign associate Carter Page and for the bureau's reliance on Steele’s discredited and Democrat-funded dossier. The watchdog’s report indicates he was able to review the Steele notes in question.

Case Agent 2 told Horowitz he informed Steele the FBI was interested in obtaining information in “three buckets”: “(1) Additional intelligence/reporting on specific, named individuals (such as [Page] or [Flynn]) involved in facilitating the Trump campaign-Russian relationship; (2) Physical evidence of specific individuals involved … [and] (3) Any individuals or sub sources … who could serve as cooperating witnesses.”

The FBI and Steele disagreed about some of what happened during the meeting.

“Case Agent 2 said he advised Steele of the need to establish an exclusive reporting relationship with the FBI concerning the information that he was being tasked to collect,” Horowitz wrote, adding, “Recollections of the Crossfire Hurricane team members… all agreed that Steele did not affirmatively disagree.”

Horowitz said Steele “told us that the FBI indicated at the meeting in early October that the FBI wanted to take over the ‘election project’ and control it” but “he made it clear that was not going to happen.” Horowitz wrote that Steele said “the FBI accepted his position.” The DOJ watchdog added that “the notes that Steele made available to the OIG to review … were consistent with his testimony.”

Case Agent 2's summary states that Steele was “given a general overview of the FBI's CROSSFIRE HURRICANE investigation and told that it was a small cell that was exploring a small piece of the overall problem of Russian interference in the U.S. Electoral process” and “was advised that the CH team was made aware of [Papadopoulos's] May 2016 comments in the U.K. in late July.”

Horowitz noted “the contents of both the ‘analytical effort’ and the FFG's notice to the U.S. government are classified.” Horowitz said Handling Agent 1 told him “that he agreed it was peculiar that Case Agent 2 gave Steele an overview of the Crossfire Hurricane investigation.” The Supervisory Intel Analyst told Horowitz that “he was concerned that Case Agent 2 had divulged too much information to Steele.” Case Agent 2 told Horowitz “that he believed he had authority … to discuss classified information with Steele, though he agreed that in the ‘heat of the moment’ he made a mistake and provided more information than he should have.”

Horowitz said his team “determined” that Case Agent 2 “did not have prior authorization to make the [classified] disclosure.” But the watchdog said Case Agent 2 “was given significant latitude from his supervisors to frame his discussions with Steele” and “believed he had authorization to discuss classified information with Steele.” Horowitz said the FBI’s Confidential Human Source Policy Guide “does not address the disclosure of sensitive or classified information to CHSs” and “we found no evidence that Case Agent 2 attempted to conceal his disclosure.”

In a 2019 book by Fusion GPS co-founders Glenn Simpson and Peter Fritsch, they wrote that the October FBI meeting “yielded an important bit of intelligence for Fusion” on Papadopoulos. Democratic lawyer Marc Elias hired Fusion GPS and met with Steele in 2016, and Elias and Clinton campaign manager Robby Mook have said Elias passed along to the Clinton campaign Trump-Russia details he learned from Fusion.

Robert Mueller’s special counsel report in 2019 concluded that the Russians interfered in the 2016 election in a “sweeping and systematic fashion” but “did not establish that members of the Trump campaign conspired or coordinated with the Russian government.”

Horowitz said that during the July 2016 meeting, “Steele provided Handling Agent 1 with a copy” of his first Trump-Russia report and “explained that he had been hired by Fusion GPS to collect information” on Trump and Russia. According to Handling Agent 1, Steele “informed him that Fusion GPS had been hired by a law firm to conduct research, though Steele stated that he did not know the law firm's name or its political affiliation” and the FBI agent told Horowitz that “he asked Steele to try to identify the law firm” but “did not ‘continually ask’ Steele about the firm's identity.” Horowitz asked the agent about an October 2016 email from a Crossfire Hurricane team member “stating that Handling Agent 1 had avoided tasking Steele to obtain the name of the law firm” but the agent “told us that information was incorrect.” Still, Horowitz said the email author “stated that it accurately represented what Handling Agent 1 had told him.”

“We reviewed what Steele represented were his contemporaneous notes of his July 5 meeting … The notes reflect that Steele told Handling Agent 1 that Steele was aware that ‘Democratic Party associates’ were paying for Fusion GPS's research, the ‘ultimate client’ was the leadership of the Clinton presidential campaign, and ‘the candidate’ was aware of Steele's reporting,” Horowitz wrote, adding that “when we asked … Handling Agent 1 told us that he did not recall Steele mentioning these facts.”

Earlier this year, Steele testified that “at the time” of writing the dossier, all his debriefings with his main sub-source were documented, but that “they no longer exist,” according to a transcript obtained by the Daily Caller. Steele told the court that all of the dossier records “were wiped in early January 2017.”

A Senate Intelligence Committee report on Russian interference released in August revealed that after the Steele dossier was published by BuzzFeed, Steele asked his friend, State Department official Jonathan Winer, to “destroy all the earlier reports Steele had sent the Department of State or return them” to Steele.

“So, I destroyed them, and I basically destroyed all the correspondence I had with him,” Winer said.

Senate Homeland Security Chairman Ron Johnson issued a subpoena to Winer in August, telling the Washington Examiner that “Winer’s admitted destruction of his records … is concerning and deserves an explanation.”