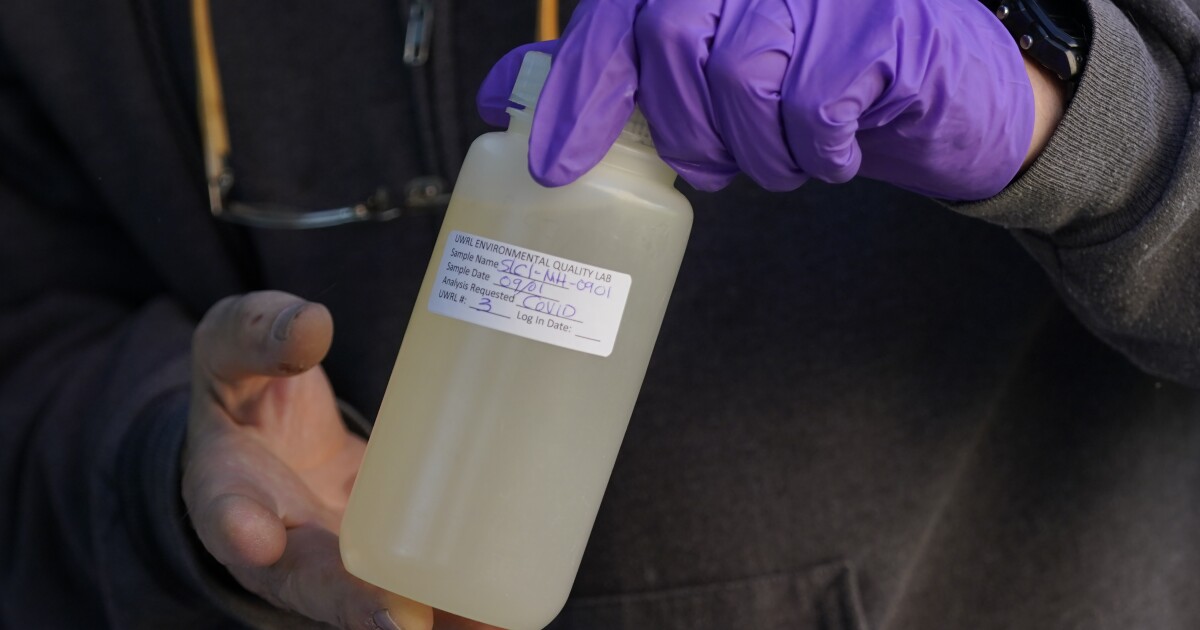 Researchers and public health officials are using Colorado’s wastewater system to understand the prevalence and transmission of COVID-19 throughout the state.

Several studies have shown people infected with COVID-19 carry detectable virus particles in their stool before, during and after treatment. Known as SARS-CoV-2 RNA, the Centers for Disease Control and Prevention (CDC) estimates these particles can be present in the body for more than 45 days, depending on the case’s severity.

CDPHE said last week that by measuring the quantity of these particles in the wastewater, it hopes “to improve our understanding of the number of individuals affected by COVID-19, including individuals who do not have symptoms or do not undergo testing.”

Data published on the dashboard compares the number of particles detected in a sample with the number of COVID-19 cases reported to the state by disease onset days – the day someone begins experiencing symptoms.

While detailed, the data doesn’t cover most of Colorado, with 22 wastewater districts participating in the project. This translates to 52% of Coloradans being covered by the tests, according to CDPHE estimates. Test sites run from Fort Collins to Pueblo. The only site outside of the Front Range is Telluride, though it isn’t listed on the state dashboard.

In many cases, the number of particles detected align with spikes in cases. For example, Broomfield recorded over 115,000 particles in its wastewater on Nov. 16. Two days later, the city recorded 45 infections, its highest total of the month.

However, researchers have found the data correlates better in southern Colorado than in the north. Carol Wilusz, a professor and RNA biologist at CSU, told The Center Square there are a lot of hypotheses about why this happens, but no definite answers yet.

“This data obviously informs the decisions public health officials are making about restrictions, but the reporting capabilities from different COVID-19 testing sites could skew the data,” she said.

Before this protocol was developed, Colorado sent its wastewater samples to a lab in Massachusetts called Biobot. At the beginning of the summer, Biobot offered a free pilot program that 16 of Colorado’s wastewater districts participated in. However, the company eventually switched to a fee-for-service model, charging $1,300 per test and taking up to 14 days to return the results.

Now, 16 of the 22 wastewater districts send their samples directly to CSU for analysis. The rest go to GT Molecular’s labs in Fort Collins. Researchers use a digital drop PCR machine for the analysis, which can fraction a water sample into 20,000 droplets and thereby amplify isolated particles.

Because wastewater is much dirtier than one’s nostrils, it takes a lot of tedious work to isolate the appropriate particles. But, the team has, so far, successfully turned around results in as little as 24 hours.

While unsavory, this methodology is also cost-effective and incredibly valuable for communities, according to Dr. Rose Nash, director of research and development for GT Molecular.

A single wastewater test from GT costs $295 but can cover thousands of people. Meanwhile a COVID-19 test for a single person can cost $850 or more in some cases.

“We wanted to make sure all communities can participate, not just the wealthy ones, even if that means the total cost of the test is more expensive than what we charge,” she told The Center Square in an interview.

To Chris McKee, GT’s CEO, this protocol is not only useful for detecting the spread of COVID-19 but can also help municipalities deal with their next big public health crisis.

“Wastewater provides an incredible way to test entire communities in relatively short order,” he told The Center Square. “It’s pretty useless to sit around and wait for seven days to get test results because the virus will have already put people in the hospital by then. We’re giving public health officials alerts within 24 hours. This gives them time to decide the best course of action going forward.”

Even though the protocol was developed as a homegrown solution, the team has shared their model with 70 other jurisdictions across the U.S. Partner organizations currently stretch from Palm Springs, Florida, to Boise, Idaho.

“This is such a huge bang for your buck, but we’ve only just begun,” McKee said.