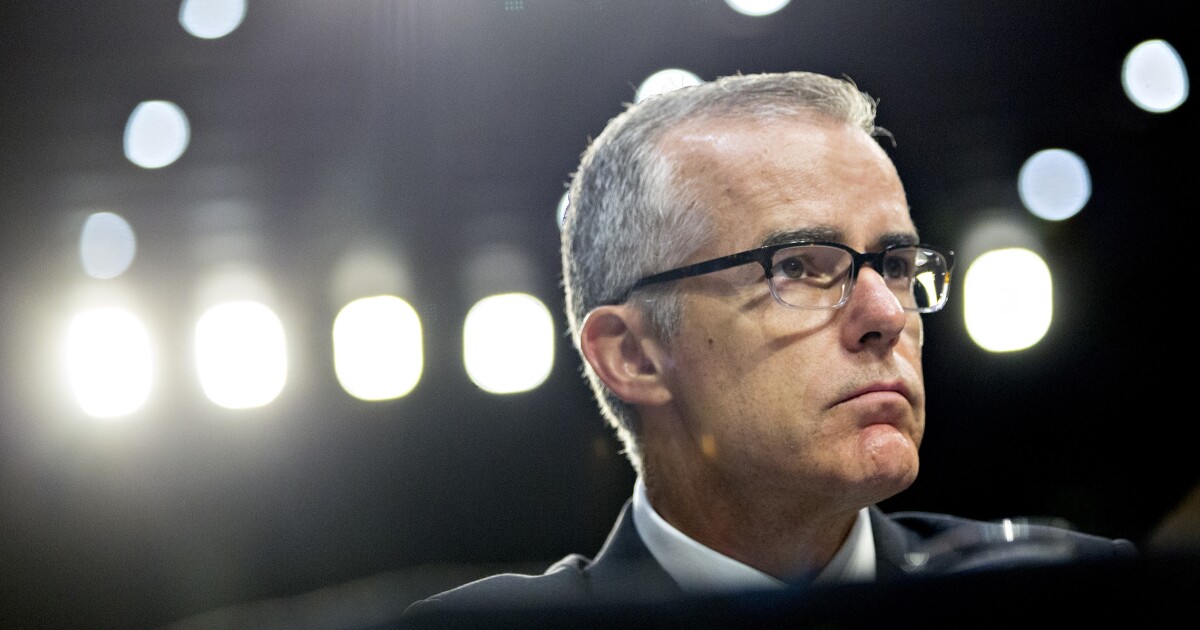 The top deputy to fired FBI Director James Comey will testify before the Senate on Tuesday on the key role that he played in 2016’s Trump-Russia investigation as to what Joe Biden, the presumptive president-elect, may have known about Crossfire Hurricane.

Andrew McCabe, who rose up the FBI ranks after joining the bureau in the mid-1990s and helped lead the FBI’s Trump-Russia team as Comey’s righthand man, will testify before Senate Judiciary Chairman Lindsey Graham’s committee on Tuesday for “Oversight of the Crossfire Hurricane Investigation: Day 4” which had originally been scheduled for October.

DOJ Inspector General Michael Horowitz released a report in 2018 detailing multiple instances in which McCabe “lacked candor” with Comey, FBI investigators, and inspector general investigators about his authorization to leak sensitive information to the Wall Street Journal that revealed the existence of an FBI investigation into the Clinton Foundation. Horowitz’s report concluded that “the evidence is substantial” that McCabe misled investigators “knowingly and intentionally” and that McCabe’s actions were “designed to advance his personal interests at the expense of Department leadership.” Then-Attorney General Jeff Sessions fired McCabe in March 2018, just before he was set to retire.

The Justice Department declined to press charges against McCabe in February, and a federal judge ruled in September that McCabe’s wrongful termination lawsuit could move toward discovery.

Graham announced McCabe’s rescheduled appearance during an appearance on Maria Bartiromo’s Sunday Morning Futures on Fox News earlier this month, where he called Crossfire Hurricane “the most corrupt investigation in the history of the FBI.” The South Carolina Republican said that U.S. Attorney John Durham is “all over this” and “I’d be shocked if people are not indicted.”

Durham was tasked by Attorney General William Barr in the spring of 2019 to examine misconduct by federal law enforcement and intelligence officials surrounding the FBI's Trump-Russia investigation. That review later turned into a criminal inquiry, which so far has led to one guilty plea, with former FBI lawyer Kevin Clinesmith admitting he fraudulently changed the wording of a CIA email to say that former Trump campaign associate Carter Page was “not a source” for the agency.

McCabe backed out of his October testimony over concerns about the coronavirus while insisting he wanted to testify in person. The delay meant the hearing did not take place until after last week’s hotly-contested election, in which Graham soundly defeated his own competitor, Democrat Jaime Harrison, in the Senate race.

Graham’s committee has already received testimony from former Deputy Attorneys General Rod Rosenstein and Sally Yates this year, both of whom said they would not have signed off on the Foreign Intelligence Surveillance Act warrants against Page if they knew then what they know now. Comey testified in September that he would not have signed off on the Page FISA applications without a “much fuller” discussion about what was being presented to the FISA court. McCabe approved the fourth and final FISA warrant for the FBI in June 2017 after Comey was fired that May.

During the first presidential debate in late September, President Trump told Biden that “you gave the idea for the Logan Act against General Flynn — you better take a look at that, because we caught you in a sense, and President Obama was sitting in the office.” Members of the FBI had raised the Logan Act the day before.

Comey testified in September that “I would remember” if Biden had raised the possibility of a Logan Act prosecution of Flynn “because it would be highly inappropriate — it did not happen.” Yates told the Senate Judiciary Committee in August that “I don’t remember” if Biden raised the Logan Act then. Biden was also one of many Obama officials to receive “unmasking” intelligence related to Flynn.

In interviews this year, Biden contradicted himself on what he knew about the Flynn investigation.

“I was never a part or had any knowledge of any criminal investigation into Flynn while I was in office,” Biden told MSNBC in May. The Trump campaign pointed out that Biden didn't talk about his knowledge of the FBI's counterintelligence investigation into Flynn, which had been initiated in August 2016. The 2020 Democratic nominee contradicted himself when asked about Flynn in an interview with ABC News after the Justice Department filed to drop its charges against Flynn.

“I know nothing about those moves to investigate Michael Flynn,” Biden said, then adding, “I thought you asked me whether or not I had anything to do with him being prosecuted. I was aware that there was, that they asked for an investigation, but that's all I know about it.”

Flynn, who briefly served as Trump's first national security adviser, pleaded guilty in December 2017 to lying to FBI investigators about his December 2016 conversations with a Russian envoy. But after changing legal teams in the summer of 2019, Flynn claimed he was innocent, withdrew his guilty plea, and pushed for the case to be dismissed.

Horowitz’s lengthy December report criticized the DOJ and the FBI for at least 17 “significant errors and omissions” related to the FISA warrants against Carter Page and for the bureau's reliance on Steele’s discredited and Democrat-funded dossier. Declassified footnotes showed that the FBI was aware that Steele’s dossier might have been compromised by Russian disinformation.

Back in October 2019, McCabe declined to tell the Washington Examiner what the FBI had verified from Steele’s dossier and why the FBI hadn’t specifically told the FISA Court that Steele was ultimately working for the Clinton campaign. A declassified FBI spreadsheet that was declassified last month showed that, into 2017, the bureau had verified little if anything related to the dossier’s biggest and most salacious claims.

Graham has said he is negotiating with Strzok to bring him in for a hearing and that he wants to hear from William Barnett, one of the FBI agents involved with the inquiry into Flynn, who cast doubt on the Trump-Russia collusion theory. Graham also said he is open to having Mueller “pit bull” Andrew Weissmann testify. Mueller declined an invitation to come before the committee.

Mueller's team concluded in early 2019 that Russia interfered in the 2016 election in a “sweeping and systematic fashion” but “did not establish” any criminal conspiracy between the Russians and the Trump campaign.

Horowitz said FBI interviews with Steele's main source “raised significant questions about the reliability of the Steele election reporting” and cast doubt on some of its biggest claims. Declassified footnotes from Horowitz’s report indicated that the bureau became aware that Steele’s dossier might have been compromised by Russian disinformation.

McCabe and Comey pushed to include allegations from Steele’s dossier in the 2017 Intelligence Community Assessment. The CIA dismissed Steele’s allegations as “internet rumor” as the other intelligence agencies ultimately overruled the efforts by Comey and McCabe. However, the dossier was summarized in a classified appendix to the Russia meddling assessment.