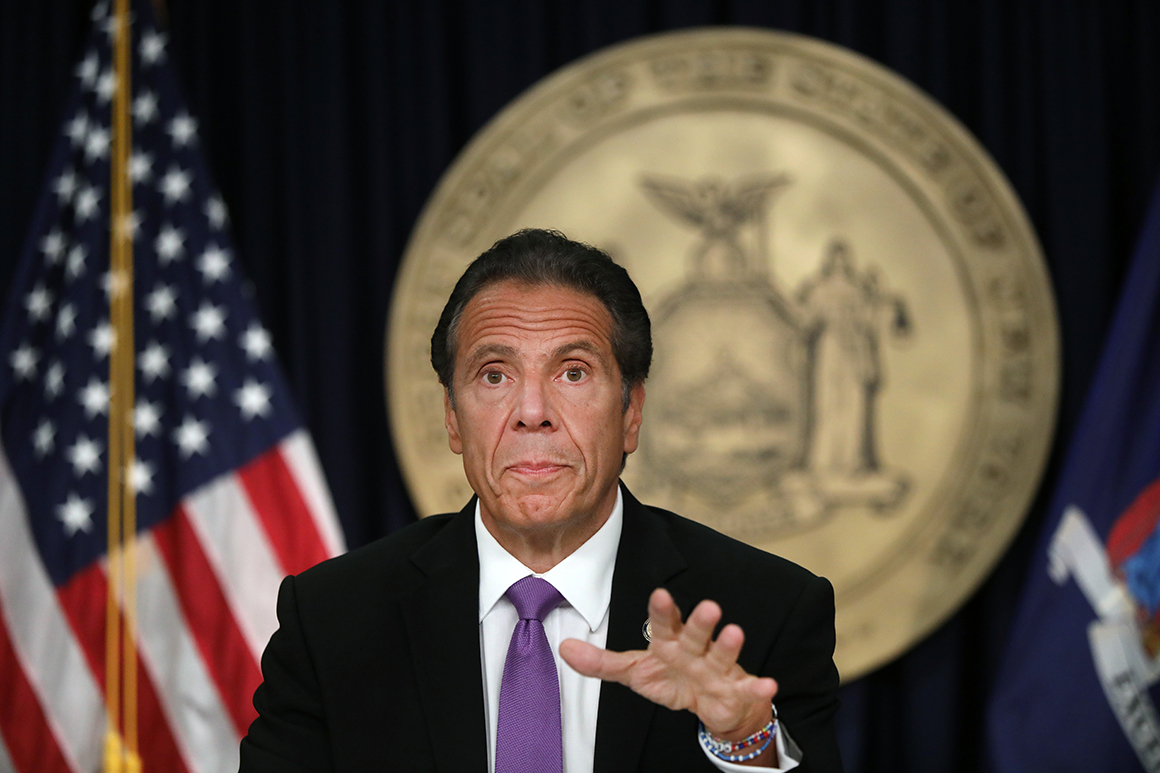 “It’s very ‘Donald Trump’ to divert, change the message, throw something out there like there is a whole other news thing,” said Assemblymember Yuh-Line Niou, a Manhattan Democrat. “In reality there’s one news thing: A lot of people died. The numbers were hidden and a lot of people who had to make decisions couldn’t make those decisions because the information was wrong.”

When asked at the press conference if his remarks, which included a reference to Kim's flip-flopping on legislation after its opponents contributed to his campaign, were appropriate for somebody who has emphasized cooperation during the pandemic, Cuomo said he was simply correcting the record.

“Do I try to assuage partisanship whenever possible? Yes,” Cuomo said. “But if you attack my integrity and my administration's integrity, am I going to fail to respond?”

The death toll in nursing homes across New York has been a pressure point for Cuomo, whose star power has taken a hit over the state’s initial policy of sending recovering Covid-19 patients back to long-term care facilities. His administration for months pushed back on critiques and cast blame on federal directives for any questionable action the state took early in the pandemic.

In recent weeks, though, a report by the state’s Democratic attorney general and a leaked call with Cuomo’s top aides revealed that the governor’s office intentionally withheld death counts from legislators and the public. That’s hard evidence some members of Cuomo’s party — especially those with established animosity toward the administration — say is impossible to ignore.

Legislative leaders in Albany usually seek to temper their differences with the governor at this time of year, with the state budget due before April 1. The annual budget process culminates in a massive, three-way deal between Cuomo and the leaders of both houses of the Legislature that typically addresses all of the year’s biggest legislative priorities. But Cuomo’s handling of the scandal around nursing home deaths and his response to Kim’s criticism are upending the usual way of doing things in the Capitol.

Already, different wings of the party have clashed over whether and how to tax the state's wealthiest, while also dealing with issues like marijuana legalization, as New York stared down a $15 billion budget hole. Now, both houses of the Legislature are discussing ways to rein in the emergency powers they gave Cuomo at the outset of the pandemic.

Senate Democrats are set to release formal legislation Friday — that could be passed as soon as next week — creating a joint review board with members from both chambers to evaluate any orders Cuomo might make in the future as they relate to the pandemic.

The governor’s aggressive response to criticism is setting the wrong precedent for collegiality in a time when it’s sorely needed, said Mike Gianaris, the deputy majority leader in the state Senate.

“People are uniformly outraged,” Gianaris said of the reactions by Democratic lawmakers to Cuomo’s response to the nursing home deaths scandal. “During this time, I would hope the focus would be on the good of the people rather than any personality disorders anyone is experiencing.” Gianaris also is a longtime Cuomo foil.

The Legislature took a hard left turn in 2018 with the election of a corps of young progressives, giving Democrats control of the state Senate and thus, for the first time in years, majorities in both legislative houses. That changed dynamic led to the swift passage of several progressive measures, including a landmark climate bill, that were left for dead every year when Republicans ran the upper chamber.

It also left Cuomo, a moderate Democrat accustomed to dominating legislative negotiations, without a scapegoat when further-left priorities failed to make their way into the final state budget.

Cuomo hasn't shied from criticizing specific Democrats with whom he’s disagreed, whether the differences were based on personality or policy. That has included accusing Senate Democratic leaders of putting “politics ahead of government” for opposing Amazon's now-aborted plans to build in New York City, and one of his top aides calling a trio of young female lawmakers “f—ing hypocrites” during their calls for campaign fundraising reform.

Newer Democratic lawmakers are ready to disrupt the status quo. State Sen. Jabari Brisport, a Democratic socialist from Brooklyn and one of the freshman lawmakers who signed on to a statement with 14 others calling for Cuomo’s emergency powers to be revoked, is one of them. Though Brisport hasn’t yet experienced New York’s notorious closed-door style of budget negotiations firsthand, he said he is hungry for the Legislature to recapture some of its power in the process and bluntly described Cuomo as a bully.

“He’s gone completely unhinged,” Brisport said in an interview. “He likes to get his way and he likes to be vindictive if he’s not getting his way, so I’m not surprised by his reaction, but I am as surprised as everyone else there was a cover-up of deaths.”

That sort of public indignation toward Cuomo isn’t necessarily representative of the legislative Democratic conference as a whole. Brisport and a handful of other Democratic legislators who
did not speak on the record said they are aware, and frustrated, that some of the conference’s more moderate members have been quiet amid the scandal.

“I think it’s pretty well known that the governor really knows how to hold a grudge. Forever,” Brisport said. “But for the portion of us that signed that letter, we know this is bigger than our personal political careers. This is whether we have a governor who is balanced by other parts of the state [government] or one who has unilateral power to do as he sees fit.”

That fervor isn't misplaced, but it's also just a byproduct of having a large class of young or new Democrats, said Assemblymember Richard Gottfried (D-Manhattan), the longest serving legislator in state history.

“They are a very diverse and progressive and outspoken group, and they arrived after the last couple of election cycles when we have also seen large freshman classes,” Gottfried said, saying it “adds up for a very lively Legislature.”

“It contributes to a more volatile picture, both within the Legislature and between the Legislature and the governor,” said Gottfried, who was elected in 1970 and has been chair of the Assembly Health Committee since 1987. “It’s not news — if you read the Federalist Papers, it’s supposed to be that way.”

Still, Gottfried draws a distinction between Cuomo’s emergency powers that lawmakers approved last March and the nursing home data scandal. He doesn’t see a “legal wrong” by Cuomo’s administration on nursing homes, though he is sponsoring a bill to require prompt disclosure of the kind of data the governor’s office withheld. He said he is not downplaying the seriousness of the situation, but warned that anyone who wants to get anything done in Albany needs to tamp down the vitriol.

“If the climate doesn’t improve, it could become a problem in negotiating the budget,” he said. “There will be a lot of very hot topics on the table in the budget and that will be difficult enough without additional fuel on the fire.”

The two top lawmakers in the Capitol — Assembly Speaker Carl Heastie and Senate Majority Leader Andrea Stewart-Cousins — have both been critical of the administration's handling of nursing home deaths. But their voices have been less prominent than during a typical February in Albany, when they would be a constant presence on session days. The state Capitol remains closed to the public and most legislative activity is being conducted remotely.

But Heastie, too, had similar concerns about collegiality following Cuomo’s attack on Kim.

“Now more than ever, everyone involved needs to lower the temperature and work together to move this state forward and get past this pandemic,” Heastie said in a statement. “That should be our focus.”