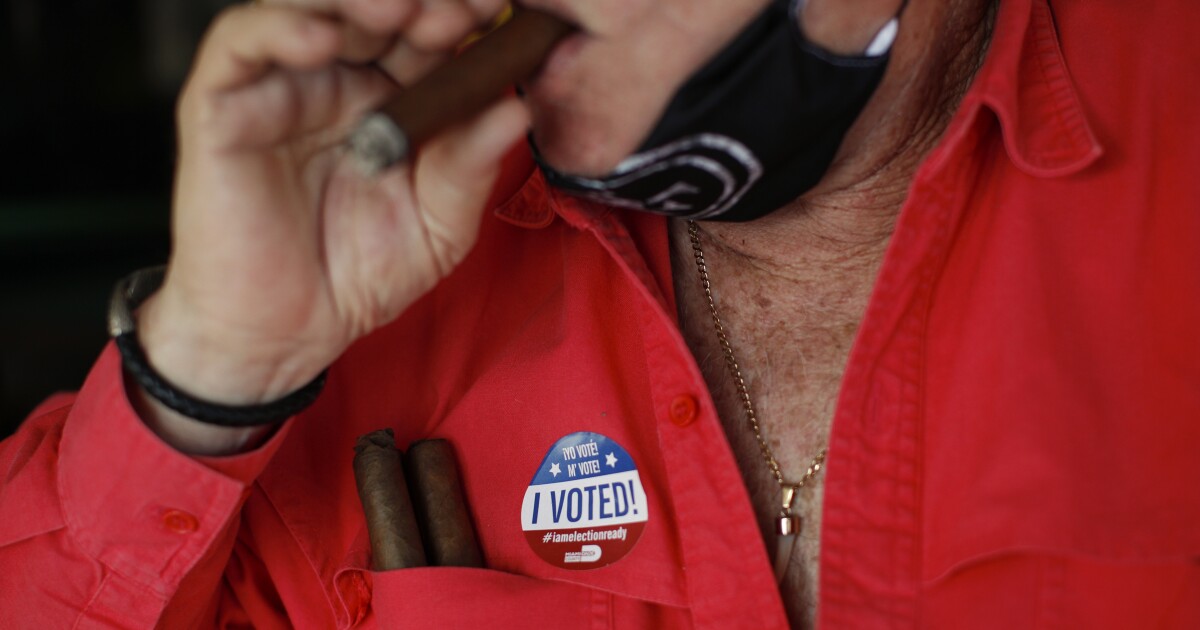 The election post-mortem has become the effort of candidates and political wonks alike. A number of Democrats have acknowledged, quite forcefully and regretfully, that the “s” word hurt them. “I’m not a f—ing socialist,” Jazon Pizzo, a Democratic state senator in Florida, told Politico in an interview. “My life is a manifestation of the American dream. I believe in free markets.”

Virginia Democratic Rep. Abigail Spanberger’s comments have probably received the most attention. “We need to not ever use the word ‘socialist’ or ‘socialism’ ever again,” she told her House colleagues following her reelection victory. Spanberger also said that a repeat of their electoral strategy will mean Democrats get “f—ing torn apart” next time around.

Pizzo and Spanberger don’t want to talk about it because it’s an expletive-inspiring electoral liability. For Democratic Rep. Debbie Mucarsel-Powell, it’s just not a compelling theory of what went wrong. Mucarsel-Powell, who represents southern Florida’s 26th Congressional District, just lost her reelection bid to Republican Carlos Gimenez. She excluded socialism from her diagnosis, writing in a recent op-ed for the Washington Post, “The reality [of Democrats’ underperformance] is complicated: a largely working-class Latino electorate desperate to reopen the economy; a national party that didn’t talk about the economy enough and thinks racial identity alone drives how communities of color vote; and a steady campaign of anti-Democrat disinformation that targeted Latinos.”

“Some in my party have taken to blaming Latinos’ fear of socialism as the cause of Democratic losses. Yes, the fear of socialism is real and ingrained for those of us who fled violence and persecution. … And yes, Republicans lied shamelessly, falsely accusing me and other Democrats of being socialists. But the ‘socialism’ attack doesn’t explain the results. In my two years in Congress, I’ve advocated against the brutal dictatorship in Venezuela and passed legislation to direct humanitarian aid to the Venezuelan people. I addressed this attack head-on; I did real work to help the people suffering, and I still lost.”

It would be presumptuous — even foolish — to suggest that Mucarsel-Powell doesn’t know her own district, though all the evidence suggests that hers and other Democratic losses were owed at least in part to some guilt-by-association with socialism.

Washington Examiner reporter Abraham Mahshie recently visited Mucarsel-Powell’s neck of the woods and spoke with locals about the election. Their comments suggest that the outgoing congresswoman is missing something. “I don’t like the socialist ideas of Biden and Kamala,” one Cuban American told Mahshie in Miami, also saying, “I don’t have confidence for here, for us, for the economy, for work. It’s terrible.” Another said, “Biden is going to form a leftist government, so leftist, almost an extreme Left government!”

Mahshie found much of the same among Venezuelans in nearby Doral. “Another Venezuelan refugee, 24-year-old Jorge Galicia, told the Washington Examiner in a Spanish-language interview that Biden represents the early signs of socialism that seeped into Venezuela some four decades ago,” Mahshie writes.

The commentariat backs the anecdotes. “It's kind of hard to come up with something when you have people in your party saying things that looked like it's socialism,” University of South Florida professor and Florida political analyst Susan MacManus told Mahshie. She also said, “There was never a strong, effective antidote or counterargument to combat the socialism.”

Linden Blue is not a Latino voter, but he did come face to face with the brutal realities of communist Cuba when Fidel Castro’s regime imprisoned him, as he detailed in his book Losing Freedom. Socialism is that for Blue — it is imprisonment, and there is clearly a significant share of Latino voters in South Florida believing the same, who have suffered or whose families, friends, and countrymen have suffered under communist tyranny enough to run from even the scent of it.

Whether socialism by its nature portends imprisonment or oppression, or whether it can have a liberal expression serving just ends, is a conversation worth having. The contentions of the Catholic Bernie Bros and David Bentley Harts of the world are not nothing. Yet, there is little space for such textured arguments in the combat of electoral politics. And besides, Mucarsel-Powell isn't trying to make the case for socialism, but nor does she consider it imperative to make the case against it.

President Trump’s performance, and specifically his gains in a place like South Florida — he grew his vote margin over 2016 in heavily-Latino Miami-Dade County — have forced the politically-interested to reexamine their many priors about the relationship between identity and electoral politics. Mucarsel-Powell indicated pretty explicitly that her caucus must do that, too, though she expresses little concern about the palatability of the message of her party's left-most wing.

The moderates — Spanberger, Sen. Joe Manchin, et al. — do, however, and how they regroup will be something to watch.