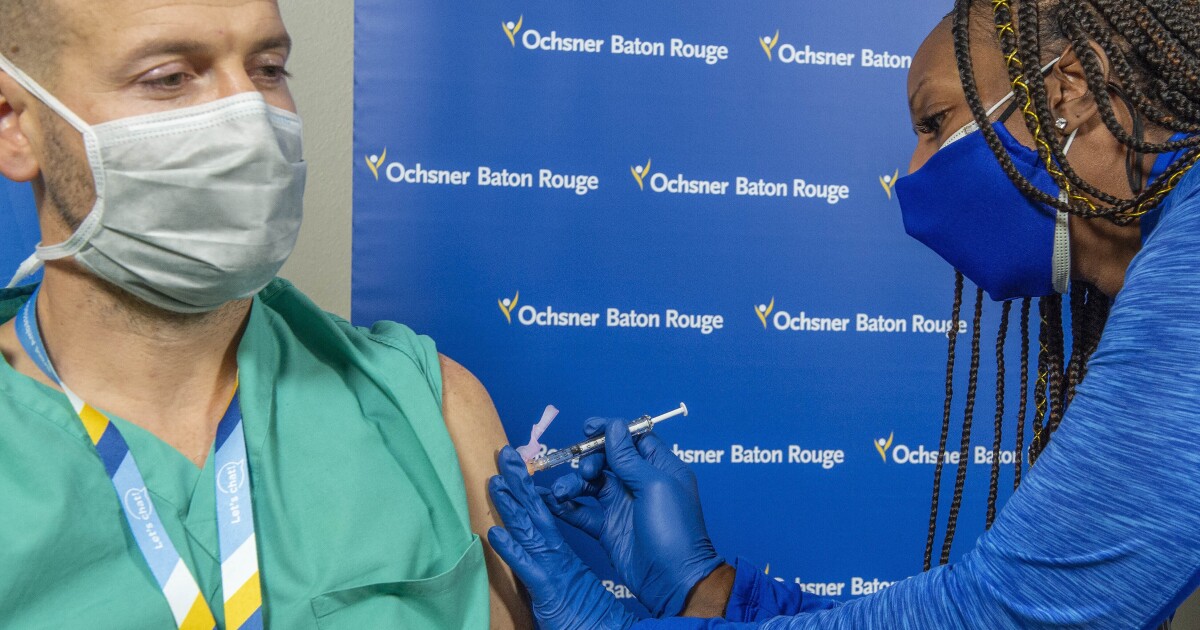 U.S. Health and Human Services Secretary Alex Azar called on states to begin vaccinating everyone age 65 and older as well as younger people with medical conditions that put them at high risk for serious COVID-19 complications, rather than focusing on people with high-risk or “essential” jobs.

The federal Advisory Committee on Immunization Practices previously had recommended an age cutoff of 74, calling for people 75 and older to be near the front of the line just behind hospital workers and nursing home residents and staff. For subsequent allocations, ACIP issued a complex prioritization schedule based in part on job categories.

Louisiana officials said they planned to follow those recommendations, albeit with slight state-specific tweaks. Hospitals and nursing homes got first crack at the vaccine, and now eligibility has been expanded to people 70 and older, people who work at health care clinics and dental offices, dialysis patients and providers, and students and staff of allied health schools.

But Azar on Tuesday said states were using the ACIP recommendations to “micromanage” distribution, leading to doses sitting in freezers and not getting into people’s arms.

Azar stressed that he would much prefer that someone in a low priority group get vaccinated than for a vaccine to go to waste.

“Use every channel,” he said. “Get the vaccine out there.”

Azar also said states that are doing a better job ensuring vaccines are being used in a timely fashion will get more vaccines in the future. The federal government so far has been distributing the limited supply of available vaccines based on population and will continue to do so for the next two weeks.

While some states report distributing upwards of 80 percent of their allotted vaccines, others report giving out less than half. Azar said the discrepancy might be partly due to some distributors not quickly reporting vaccinations to state authorities.

“Get your data together,” Azar said to state officials.

In another change announced Tuesday, the federal government no longer will hold back the second booster dose of vaccines that recipients need to get the full benefit. Edwards said this change will impose additional costs on states who will be responsible for storing second doses.

Of the 368,300 doses sent to Louisiana, 142,771 had been administered by Tuesday, according to the U.S. Centers for Disease Control and Prevention. Those totals include doses reserved for nursing homes being distributed through a program federal officials, rather than state authorities, oversee.

Edwards noted on Tuesday afternoon that the new federal guidance had only been announced that morning and said state officials haven’t had a chance to discuss possible changes. He also noted that the Trump administration will end Jan. 20 and President-elect Joe Biden’s team might have different ideas.

Edwards said officials probably wouldn’t make changes regarding the groups currently eligible, but they might change their prioritization plans going forward when current groups are only using 80 percent or less of the current number of available appointments.

There are currently 210 locations in all 64 parishes distributing vaccines by appointment only, the state health department says. Edwards said state officials chose to spread the limited supply across the state rather than hold larger distribution events in fewer locations that would be out of reach to many state residents.

Edwards did not know Tuesday afternoon how many doses Louisiana would receive next week, though he expected to get that information later in the evening. He said he expected vaccines to be available from fewer locations than 210 next week.