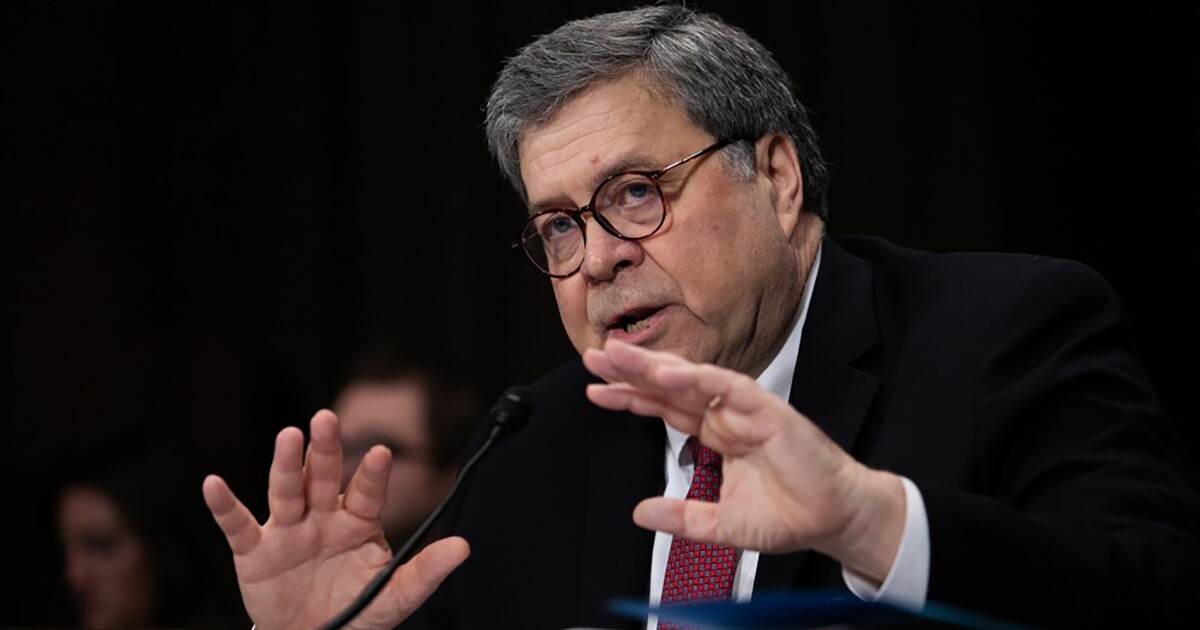 On the 32nd anniversary of the Lockerbie bombing, the Justice Department announced charges against alleged Libyan bomb maker Abu Agila Mohammed Masud for his role in the Pan Am Flight 103 attack carried out under the auspices of now-deceased Libyan dictator Moammar Gadhafi.

Pan Am Flight 103 was a transatlantic flight scheduled to fly from Frankfurt, Germany, to Detroit, Michigan, by way of London and New York City on Dec. 21, 1988. The plane was ripped apart midair above Lockerbie, Scotland, after a bomb exploded, killing all 243 passengers and 16 crew members on board, while large pieces of the airplane crashed into a residential neighborhood, killing another 11 people on the streets below.

Attorney General William Barr, whose first stint as attorney general under President George H.W. Bush came shortly after the bombing, spoke at a DOJ press conference to announce the charges, nearly three decades after two other alleged co-conspirators had been charged.

“The Lockerbie bombing remains the single deadliest terrorist attack in the history of the United Kingdom and the second deadliest in American history, the costliest being 9/11,” Barr said. “At the time, investigators were unable to identify or locate this third person, [but] I am pleased to announce that the United States has filed criminal charges against the third conspirator — Abu Agila Mohammad Masud — for his role in the bombing of Pan Am 103. Let there be no mistake — no amount of time or distance will stop the United States and our Scottish partners from pursuing justice in this case.”

In December 1988, the plane exploded at 30,000 feet, and the blast scattered wreckage across nearly the entire length of Scotland, likely making it the largest crime scene in history. The remains of 17 victims were never identified or found.

Barr said Monday that the breakthrough that led to the new charges was when investigators learned in 2016 that the bomb maker had been captured in 2012 and was questioned by Libyan law enforcement after the collapse of Gadhafi's regime. The attorney general said investigators determined that the bombing operation had been ordered by Libyan intelligence and that Gadhafi personally thanked Masud for its success. Barr said that Masud has also been implicated in the 1986 West Berlin bombing of the La Belle discothèque, which killed three people, including two U.S. service members.

Barr previously spoke at an Arlington National Cemetery Memorial Service for the Victims of Pan Am Flight 103 in December 2019, arguing that “nothing was more important to me during my tenure than driving the investigation” and that “there was nothing more important to the whole department, including all the dedicated prosecutors and FBI agents, and CIA officers, who worked tirelessly to pursue justice for you and for the whole country.”

But more than two decades later, he made it clear that he saw the bombing investigation as yet-unfinished business and believed the U.S. could have done more to bring the culprits to justice.

“On the one hand, I am proud of the investigation that was conducted by the U.S. agencies and the Scottish police. It remains, to this day, one of the most exhaustive and complex investigations in history. Two years, ten months, and 25 days after the attack — on Nov. 14, 1991, I announced charges against al Megrahi and Fhimah of the Libyan intelligence agency who, along with other co-conspirators, planned and executed the bombing,” Barr said a year ago. “But as you know all too well, questions still remain about the perpetrators and the scale and nature of their evil plot. I must say that, to this day, I am not satisfied with our country’s overall response to the attack. I never thought that putting two Libyan intelligence officers on trial should be the sum and substance of our response. The attack was an action coldly plotted and launched by the Libyan regime, and I wanted to see a decisive and overwhelming action against Gadhafi.”

In the wake of the attack, FBI and Scotland’s Dumfries and Galloway Constabulary conducted a joint-investigation for three years, eventually issuing arrest warrants for just two Libyan nationals — Lamin Khalifah Fhimah and Abdel al Megrahi. Gadhafi, who was active in funding socialist and Arab revolutionaries and terrorists in the Middle East and worldwide throughout the 1970s and 1980s and beyond, agreed to hand the men over for a special international prosecution in 1999 after continued global pressure.

Fhimah was found not guilty during a trial before three Scottish judges at Camp Zeist in the Netherlands in 2000, but his co-defendant, Megrahi, the head of security for Libyan Arab Airlines and an alleged Libyan intelligence officer, was found guilty of 270 counts of murder. Gadhafi accepted responsibility for the terrorist attack in 2003 and paid restitution to the victim families in exchange for the lifting of U.N. sanctions, though he would always claim he did not order the bombing himself. Megrahi was sentenced to life imprisonment, but he received a compassionate release in 2009 after being diagnosed with terminal prostate cancer. He died in 2012.

Former special counsel Robert Mueller, who years prior to being the FBI director for a decade had overseen DOJ’s criminal division at the time of the terrorist attack, opened up about it during a rare interview on The Oath podcast with Chuck Rosenberg this month.

“And so, the first few hours, days, addressed the evidence that one finds in the fields of Lockerbie. After the investigation was ongoing, it was tremendously important that we work cooperatively with the Scots, that we work cooperatively with other countries who lost their citizens in this disaster. And we also put into place whatever mechanisms we can to prevent another Pan Am 103,” Mueller said. “Our challenges were teaming up with another country, albeit Scotland, by utilizing the forensics tools that from the United States, from the U.K., and elsewhere, as well as all international pressures that we can bring to bear to resolve that issue. And only two persons were charged with participation in that travesty.”

Among the hundreds killed were 35 Syracuse University students returning home from a semester studying abroad, and Mueller referenced them when describing the memories of searching for evidence amid the recovered wreckage, saying, “I recall seeing shelf, after shelf, after shelf, of pieces of clothing, books, and any number of articles that found its way to the soil of the grounds. … I remember sweatshirts, Syracuse sweatshirts, more than anything else.”