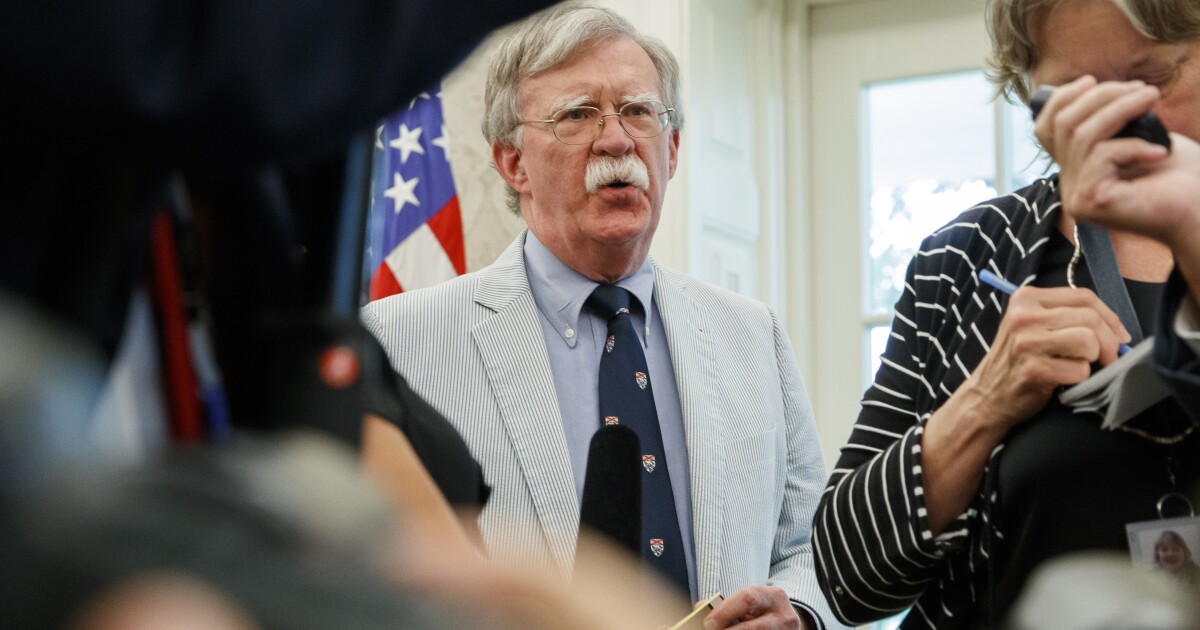 A short joint notice was filed in federal court on Wednesday by DOJ officials such as acting Assistant Attorney General Brian Boynton, acting U.S. Attorney Channing Phillips, and Charles Cooper, an attorney for Bolton, which said under federal rules, “the parties stipulate to dismissal of this action, with prejudice, all parties to bear their own fees and costs.”

The filing comes exactly one year after the Trump administration sued Bolton and attempted to block the release of his book The Room Where it Happened. In June 2020, the 45th president claimed Bolton's tell-all was a “clear breach of agreements he signed as a condition of his employment and as a condition of gaining access to highly classified information and in clear breach of the trust placed within him by the United States Government.”

“This is a complete vindication,” Bolton, who served in Trump's White House in 2018 and 2019, told Axios on Wednesday. “They're just giving up.”

Bolton’s lawyer sent a lengthy statement to the Washington Examiner on Wednesday, saying, “We are very pleased that the Department of Justice has dismissed with prejudice its civil lawsuit against Ambassador Bolton and has terminated grand jury proceedings. We argued from the outset that neither action was justifiable, because they were initiated only as a result of President Trump’s politically motivated order to prevent publication of the Ambassador’s book before the 2020 election.”

Bradley Moss, a national security lawyer, said, “That this case fell apart was due not to the law but rather the political interference and bad faith conduct by political officials that undermined DOJ’s otherwise viable actions against Bolton.”

Judge Royce Lamberth of the Washington, D.C., District Court allowed Bolton's book to be distributed and sold last summer, noting that thousands of books had already been shipped nationwide. However, he indicated it likely contained “classified information” that could open him up to civil and criminal action.

“He opted out of the review process before its conclusion,” the judge wrote at the time. “Unilateral fast-tracking carried the benefit of publicity and sales, and the cost of substantial risk exposure. This was Bolton's bet: If he is right and the book does not contain classified information, he keeps the upside mentioned above; but if he is wrong, he stands to lose his profits from the book deal, exposes himself to criminal liability, and imperils national security. Bolton was wrong.”

In the memoir, Bolton claimed Trump asked Chinese President Xi Jinping if China could help his reelection campaign. However, U.S. Trade Rep. Robert Lighthizer, who claims to have been present at that discussion, told lawmakers Bolton's claims were “absolutely untrue.” Bolton also said Russian President Vladimir Putin thinks he can play Trump “like a fiddle.”

His allegations were contested by Trump himself and senior administration officials. Bolton also claimed former Secretary of State Mike Pompeo once wrote denigrating notes about Trump to Bolton, including that talks with North Korea had a “zero probability of success” and that Trump was “full of sh*t.”

Bolton’s book seemed to cast doubt on a key element of a controversial Atlantic article about Trump and the military. In addition, the Trump national security adviser wrote about what he called the “Ukraine fantasy conspiracy theories” that led to Trump’s first impeachment.

Trump said Bolton was a “liar,” and Pompeo called him “a traitor who damaged America by violating his sacred trust with its people.”

Bolton offered to testify in Trump's Ukraine-related impeachment trial early last year, but only if the Republican-led Senate issued a subpoena against him. The upper chamber declined to do so.

The Democratic-led House asked Bolton to testify, but after he refused, the House declined to issue a subpoena to compel his testimony. After being impeached by the House, Trump was acquitted by the Senate.

Trump railed against the memoir in June 2020 and referred to Bolton as “a disgruntled boring fool.”

“Wacko John Bolton’s ‘exceedingly tedious' (New York Times) book is made up of lies & fake stories. Said all good about me, in print, until the day I fired him. A disgruntled boring fool who only wanted to go to war,” he tweeted just after midnight on that Thursday in June 2020. “Never had a clue, was ostracized & happily dumped. What a dope!”

In a later tweet, Trump said, “Bolton’s book, which is getting terrible reviews, is a compilation of lies and made up stories, all intended to make me look bad. Many of the ridiculous statements he attributes to me were never made, pure fiction. Just trying to get even for firing him like the sick puppy he is!”

In October, Lamberth ruled the Justice Department’s lawsuit was allowed to move forward, rejecting efforts by Bolton to dismiss the case.

Ellen Knight, former senior director for records access and information security management at the NSC who was heavily involved in the pre-publication review process for Bolton’s book, released a letter in September, indicating she was “very concerned about the politicization, even the perceived politicization, of the prepublication review process.”

The Justice Department reportedly opened a criminal inquiry in September into whether Bolton unlawfully disclosed classified information in his book. A grand jury reportedly convened and issued subpoenas for communication records from Bolton’s publisher, Simon & Schuster, and his literary agency, Javelin.

An opinion by Lamberth in January would have allowed Bolton to move ahead with limited discovery, saying, “The Court holds that evidence of bad faith would be material to summary judgment because it could support an unclean hands defense. The Court also holds that additional evidence about whether the book contains properly classified material is not material to summary judgment.”

The DOJ declined to comment. Trump's press team did not immediately respond to requests for comment from the Washington Examiner.

McConaughey not running for governor of Texas