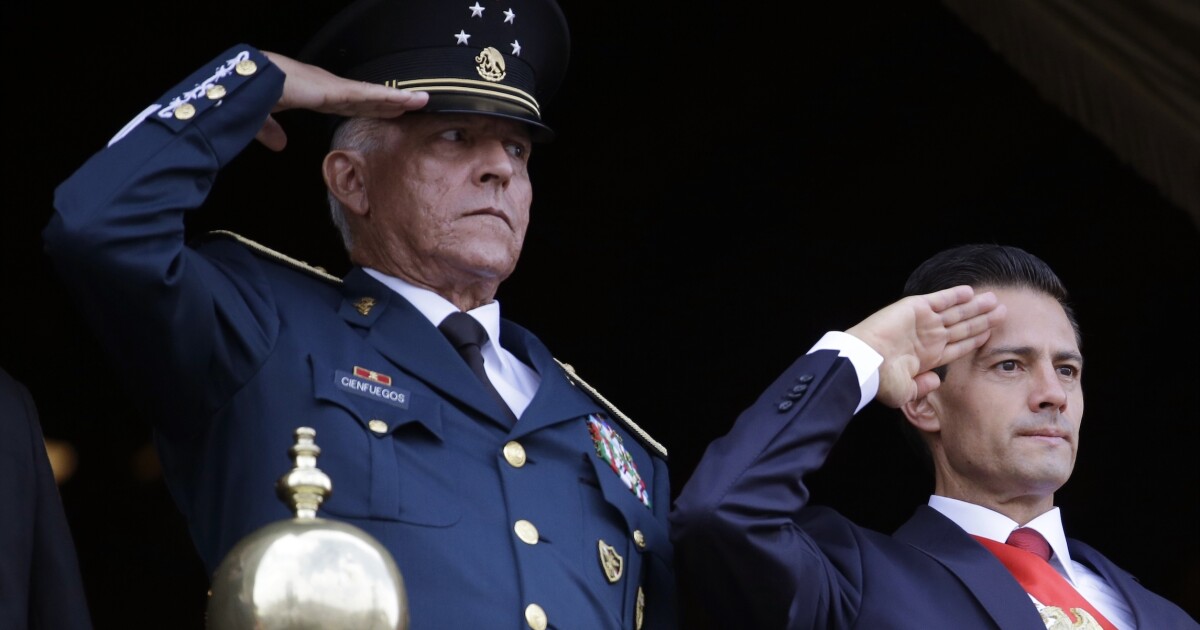 Attorney General William Barr announced on Tuesday the United States will seek the dismissal of criminal charges against Salvador Cienfuegos Zepeda, Mexico’s former secretary of defense, after he was arrested in the U.S. last month and accused of helping a deadly drug cartel operate in Mexico and in the U.S.

In a joint statement released with Alejandro Gertz Manero, the fiscalia general of Mexico, the head of Mexico’s equivalent to the Justice Department, Barr noted that Cienfuegos had been arrested on “charges of conspiracy to manufacture, import, and distribute narcotics into the United States and money laundering” tied to the notorious H-2 Cartel, which, if he was convicted, could have landed Cienfuegos behind bars for life. The statement also said that “upon learning of the arrest and U.S. charges” against Cienfuegos, Mexico “opened its own investigation.”

“In recognition of the strong law enforcement partnership between Mexico and the United States, and in the interests of demonstrating our united front against all forms of criminality, the U.S. Department of Justice has made the decision to seek dismissal of the U.S. criminal charges against former Secretary Cienfuegos, so that he may be investigated and, if appropriate, charged, under Mexican law,” Barr said.

The decision comes with roughly 64 days left in the Trump administration, after which President-elect Joe Biden will take office.

Last month, the Justice Department alleged in federal court that Cienfuegos, who was secretary of national defense in Mexico from 2012 to 2018, “abused that public position to help the H-2 Cartel, an extremely violent Mexican drug trafficking organization, traffic thousands of kilograms of cocaine, heroin, methamphetamine and marijuana into the United States,” including in Los Angeles, Las Vegas, Ohio, Minnesota, North Carolina, and New York City. DOJ investigators further alleged that “in exchange for bribe payments, he permitted the H-2 Cartel — a cartel that routinely engaged in wholesale violence, including torture and murder — to operate with impunity in Mexico.” A grand jury in the Eastern District of New York indicted him in 2019, and he was arrested in Los Angeles in October.

The Justice Department also told the court that the H-2 Cartel “has used corruption of public officials, including bribes to the defendant while he was a high-ranking Mexican official, as a means and method of achieving the goals of its drug trafficking enterprise” and that “in exchange for bribes of other Mexican government officials, the H-2 Cartel ensured the arrest and torture of rival drug traffickers by Mexican law enforcement officials, the release of members of the H-2 Cartel from prison, and the ability to engage in wholesale drug trafficking, firearms trafficking and violence, including dozens of murders, without interference by Mexican law enforcement officials.” Prosecutors said thousands of intercepted text messages showed that, while he was defense secretary, Cienfuegos was bribed to help ensure military operations were not conducted against the cartel, initiated military operations against the cartel’s rivals, helped expand the territory controlled by the cartel, introduced top cartel leaders to other corrupt Mexican officials, and warned the cartel about the ongoing U.S. investigations.

“One of our highest priorities must remain destroying the Mexican cartels. Their trafficking is largely responsible for the deaths, as we all know now, of 70,000 Americans a year. And also, the costs of this don’t count the destroyed families, the destroyed lives, the draining of our national treasure as state budgets are crushed by the burden that this — this narcotic trafficking causes,” Barr said. “The president has made clear that we are in this fight against the cartels to win, and that we are not interested in half measures, and that the threat posed by the cartel is not just a law enforcement threat, but a national security threat as well.”

Barr said on Tuesday that commitment remained in place. He also said the U.S. would help Mexico with its own investigation into Cienfuegos.

“At the request of the Fiscalía General de la República, the U.S. Department of Justice, under the Treaty that governs the sharing of evidence, has provided Mexico evidence in this case and commits to continued cooperation, within that framework, to support the investigation by Mexican authorities,” Barr said Tuesday. “Our two countries remain committed to cooperation on this matter, as well as all our bilateral law enforcement cooperation. As the decision today reflects, we are stronger when we work together and respect the sovereignty of our nations and their institutions. This close partnership increases the security of the citizens of both our countries.”