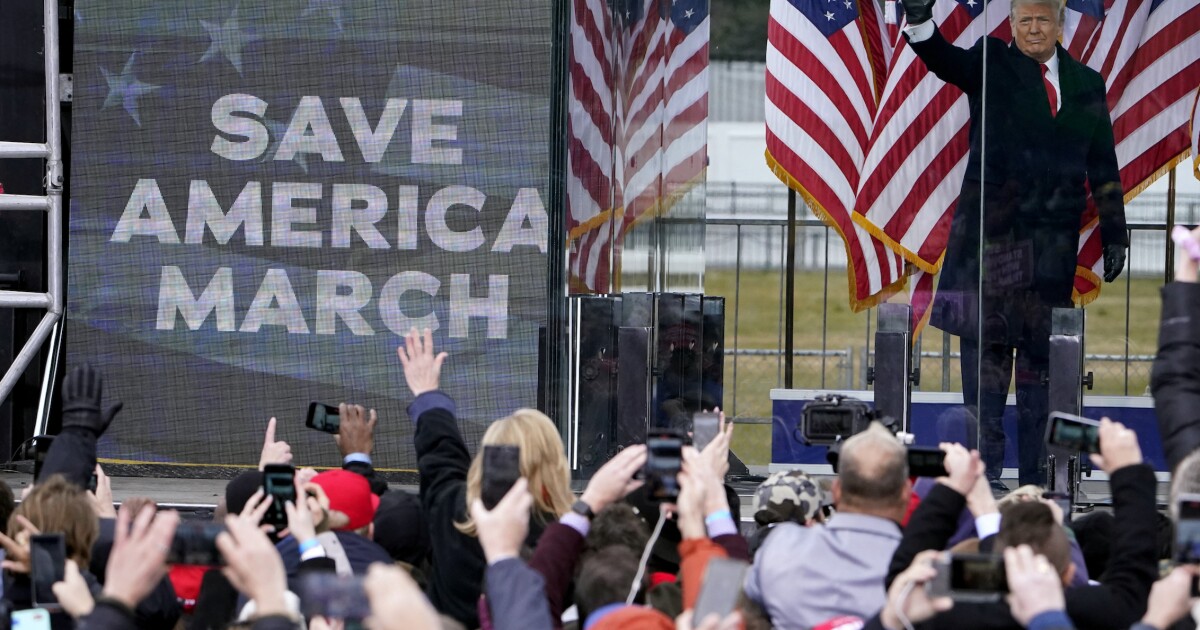 Just before Barr’s resignation was announced, White House staffer Molly Michael sent Rosen a Dec. 14 email “From POTUS” on “Antrim County Talking Points,” which contended, “This is the evidence that Dominion Voting machines can and are being manipulated … A cover-up is Happening regarding the voting machines in Michigan … These same Dominion machines were used throughout Michigan, and the results must be discounted until all Dominion machines can be reviewed for fraudulent vote manipulation … Michigan cannot certify for Biden. This is a seditious conspiracy to undermine the election process and the will of the American people.”

Similar emails were then sent to the U.S. Attorneys for the Eastern and Western Districts of Michigan through an assistant for then-Principal Associate Deputy Attorney General Richard Donoghue.

“Just had a very nice meeting with Attorney General Bill Barr at the White House. Our relationship has been a very good one, he has done an outstanding job!” Trump tweeted that day, also announcing the positions for Rosen and Donoghue.

“To date, we have not seen fraud on a scale that could have affected a different outcome in the election,” Barr said in December, also shooting down allegations that millions of votes were flipped from Trump to Biden by voting machines nationwide. “The DHS and DOJ have looked into that, and so far, we haven’t seen anything to substantiate that.”

During his final press conference a few days before Christmas, Barr repeated that he had not seen evidence of enough fraud to change the outcome of the vote.

Trump spent the weeks after the election claiming it had been stolen from him by Biden. The Democratic-led House voted to impeach Trump, with the article of impeachment accusing him of inciting an insurrection, but he was acquitted after a Senate trial.

Michael sent a Dec. 29 email to Rosen, Donoghue, and then-acting Solicitor General Jeffrey Wall with a draft legal brief for the Supreme Court, saying that “the President asked me to send the attached draft document for your review” and that she had also shared it with then-chief of staff Mark Meadows and then-White House counsel Pat Cipollone. The 54-page draft complaint to the Supreme Court was aimed at challenging the election results in Pennsylvania, Georgia, Michigan, Wisconsin, Arizona, and Nevada.

This desired challenge contended that “the same less than one in a quadrillion statistical improbability of Mr. Biden winning the popular vote in … Georgia, Michigan, Pennsylvania, and Wisconsin.” The draft also claimed that “in addition to unconstitutional acts associated with mail in and absentee voting, there are grave questions surrounding the vulnerability of electronic voting machines — especially those machines provided by Dominion Voting Systems” and wanted the Supreme Court to “declare that the electoral college votes cast by such presidential electors appointed in … Pennsylvania, Georgia, Michigan, Wisconsin, Arizona, and Nevada … cannot be counted.”

Kurt Olsen, a private attorney who had represented Texas in its failed challenge of the 2020 election, emailed multiple DOJ officials the same day about the same issue. In a message to Wall, Olsen wrote, “Last night the President directed me to meet with AG Rosen today to discuss a similar action to be brought by the United States … This is an urgent matter.” Olsen also emailed Rosen’s chief of staff, John Moran, saying, “As I said on our call, the President of the United States has seen this complaint, and he directed me last night to brief AG Rosen in person today and discuss bringing this action. I have been instructed to report back to the President this afternoon after this meeting.”

The Democratic-led committee said emails confirmed that Trump met with Rosen, former Assistant Attorney General Jeffrey Clark, and other DOJ officials on Dec. 31 and Jan. 3. Meadows sent Rosen an email on Jan. 1, saying, “There have been allegations of signature match anomalies in Fulton County, Georgia. Can you get Jeff Clark to engage on this issue immediately to determine if there is any truth to this allegation.” Rosen sent Clark the cellphone number of then-U.S. Attorney for the Northern District of Georgia Byung Pak with the subject line “atlanta,” and Clark told Rosen the next day that “I spoke to the source and am on with guy who took the video right now. Working on it. More due diligence to do.”

Associate Deputy Attorney General Patrick Hovakimian emailed DOJ associates on Jan. 3, saying, “It sounds like Rosen and the cause of justice won.” John Demers, the head of the DOJ’s national security division, replied, “Amazing.” Donoghue emailed Pak that day with the subject line “Please call ASAP.” Pak resigned hours later, emailing, “Please find attached my resignation letters addressed to the President and the Acting Attorney General. It has been an honor working with you.”

Meadows forwarded Rosen an email from Trump adviser Cleta Mitchell on Dec. 30 related to Fulton County in Georgia, saying, “Can you have your team look into these allegations of wrongdoing. Only the alleged fraudulent activity.”

Meadows sent Rosen another email on Dec. 30 that included the translation of a document from an individual in Italy named Carlo Goria that claimed, “I confirm my direct knowledge that activities undertaken here in Italy have had a negative impact for the President of the U.S. regarding the manipulation of the electoral vote of November 3rd and 4th, 2020. I confirm that Leonardo SpA at its Pesara facility, using advanced military encryption capabilities, changed the U.S. election result from President Trump to Joe Biden.” The baseless claims contended this alleged plot was done “in coordination with senior US intelligence officials (CIA)” and involved information loaded onto “military satellites.”

He also emailed Rosen on Jan. 1, sending him a YouTube link related to the same Italian conspiracy theory, saying, “Brad Johnson: Rome, Satellites, Servers: an Update.” Donoghue told Rosen it was “pure insanity.” Rosen replied, “Yes. After this message, I was asked to have FBI meet with Brad Johnson, and I responded that Johnson could call or walk into FBI’s Washington [Field] Office with any evidence he purports to have. On a follow up call, I learned that Johnson is working with Rudy Giuliani, who regarded my comments as ‘an insult.’ Asked if I would reconsider, I flatly refused, said I would not be giving any special treatment to Giuliani or any of his ‘witnesses’, and reaffirmed yet again that I will not talk to Giuliani about any of this.”

The Trump chief of staff sent another email to Rosen the same day, writing, “There have been allegations of signature match anomalies in Fulton County, Georgia. Can you get Jeff Clark to engage on this issue immediately to determine if there is any truth to this allegation.” Rosen replied to Donoghue, “Can you believe this? I am not going to respond to the message below.” Meadows wrote to Rosen again that evening related to Dominion machines with the subject line and attachment named “2020 Ballot Security – New Mexico Complaints” and asked, “Can you forward this to your team to review the allegations contained herein.”

At a press conference in Washington, D.C., in November, where she stood alongside Trump personal attorney Rudy Giuliani and Trump campaign counsel Jenna Ellis, Powell claimed Dominion Voting Systems software was created “at the direction” of the late Venezuelan President Hugo Chavez to steal elections in his country and that the machines “can set and run an algorithm that probably ran all over the country to take a certain percentage of votes from President Trump and flip them to President Biden.” Trump repeatedly tweeted about Dominion to cast doubt on the election.

As Trump-allied insiders distanced themselves from election fraud allegations made by Powell, and national security officials within the Trump administration said they had seen no evidence of her claims, the president's legal team announced in November that the attorney had no direct role in its efforts. Dominion filed a $1.3 billion defamation lawsuit against Powell in January, saying, “Powell's wild accusations are demonstrably false. … The viral disinformation campaign has irreparably damaged Dominion’s reputation.” Dominion sued Giuliani later that month too.