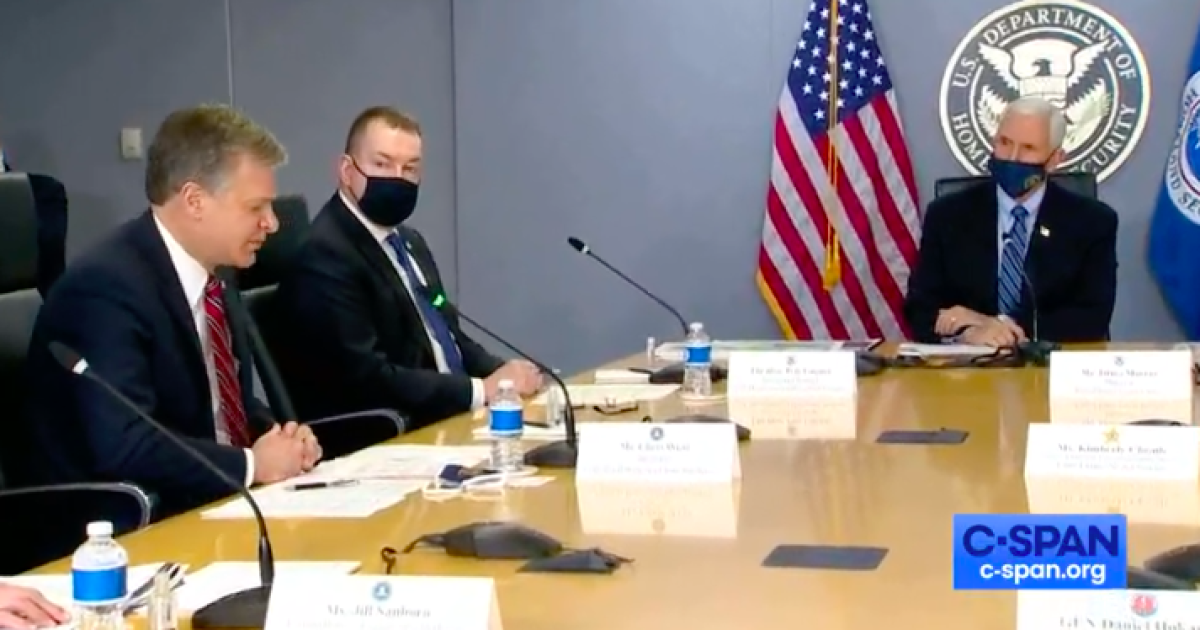 The FBI’s leader warned about an “extensive amount” of “concerning online chatter” related to potential violence at events surrounding President-elect Joe Biden’s inauguration, both in Washington, D.C., and at state capitols around the country following the storming of the U.S. Capitol last week.

FBI Director Christopher Wray made the comments during a security briefing for Vice President Mike Pence at the Federal Emergency Management Agency headquarters with other government leaders involved in securing next Wednesday’s inauguration in the nation’s capital amid growing concerns that some of the people or groups involved in last week’s deadly siege might attempt some sort of violence.

“When we talk about potential threats … we are seeing an extensive amount of concerning online chatter, is the best way I would describe it, about a number of events surrounding the inauguration. And together with our partners, we evaluate those threats and what kind of resources to deploy against them. Right now, we’re tracking calls for potential armed protests and activity leading up to the inauguration,” Wray said. “And the reason I use the word ‘potential’ is because one of the real challenges in this space is trying to distinguish what’s aspirational versus what’s intentional. We’re concerned about the potential for violence at multiple protests and rallies planned here in D.C. and at multiple state capitol buildings around the country in the days to come that could bring armed individuals within close proximity to government buildings and officials.”

Wray added: “Just as we’re doing with our investigation into last week’s violent activities at the Capitol, we’re bringing our aggressive operational capabilities and deep investigative and intelligence expertise to next week’s inauguration … We’ve been planning for months and months on this.”

The Democratic-led House voted Wednesday to impeach President Trump, with the article of impeachment accusing him of inciting an insurrection in connection to rioters breaching the U.S. Capitol as lawmakers counted electoral votes. The final impeachment vote was 232-197, with 10 Republicans voting to impeach the president. The Senate trial will likely not be held until after Biden takes office later in January.

The FBI director said Thursday that the bureau’s “posture is aggressive — and it’s going to stay that way” as he revealed that the FBI and its partners had “already arrested more than 100 individuals for their criminal activities in last week’s siege of the Capitol, and continue to pursue countless other related investigations.” He said that “we’re looking at individuals who may have an eye toward repeating that same kind of violence that we saw last week” and “from Jan. 6 alone, we’ve already identified over 200 suspects — so we know who you are, if you’re out there, and FBI agents are coming to find you.”

Wray stressed that “together with our partners here in the district and across the country, we’re going to be doing everything that we can to ensure a smooth transition of power in the days to come.”

A host of people who participated in the chaos and violence surrounding the Capitol last week have been charged with federal crimes, including one who was in possession of 11 Molotov cocktails, one who repeatedly punched a police officer in the face and chest, one who was wearing a “Camp Auschwitz” sweatshirt, another who dubbed himself the “QAnon shaman” and was pictured on the Senate dais, one carrying a Confederate flag, and many more.

Acting U.S. Attorney Michael Sherwin announced on Tuesday that 170 subject case files had been opened and more than 70 specific criminal cases had been filed. Sherwin said that figure is expected to “geometrically increase.” He also revealed specialized strike forces were also looking into potential sedition charges and into attacks on law enforcement and the media.

In his own remarks on Thursday, Pence said that “we are committed to an orderly transition and to a safe inauguration — and the American people deserve nothing less” as he stressed that “our aim here, the American people can be confident, is that we’re going to ensure that we have a safe inauguration, that President-elect Joe Biden and Vice President-elect Kamala Harris are sworn in as the new president and vice president of the United States.”

FEMA Administrator and acting Homeland Security Secretary Pete Gainer stressed that Biden’s inauguration has been designated a national security special event, while Gen. Daniel Hokanson of the National Guard Bureau said that 7,000 National Guard troops were in Washington, D.C., already and that that number was building to 21,000 for the inauguration itself.

Secret Service Director James Murray projected confidence that next week would not see the same sort of chaos as there was last week.

“I imagine the question on everyone’s mind is why is we think that what happened on Jan. 6 can’t happen next week, and I would point very keenly to the level of planning and coordination we’ve been carrying out for more than nine months,” Murray said. “We are highly confident in our security plan, but we are always wide-eyed and sober.”

Capitol Hill Police Officer Brian Sicknick died Jan. 7 “due to injuries sustained while on-duty” after he was “injured while physically engaging with protesters,” according to U.S. Capitol Police. A federal homicide investigation has been opened into his death.

A woman killed by law enforcement, 35-year-old Ashli Babbitt from California, was an Air Force veteran and Trump supporter who was shot while trying to climb through a barricade as a crowd tried to break down a door in the Capitol. Police said three others had various medical emergencies and died during the chaos at the Capitol building and that dozens of officers were injured amid the unrest.