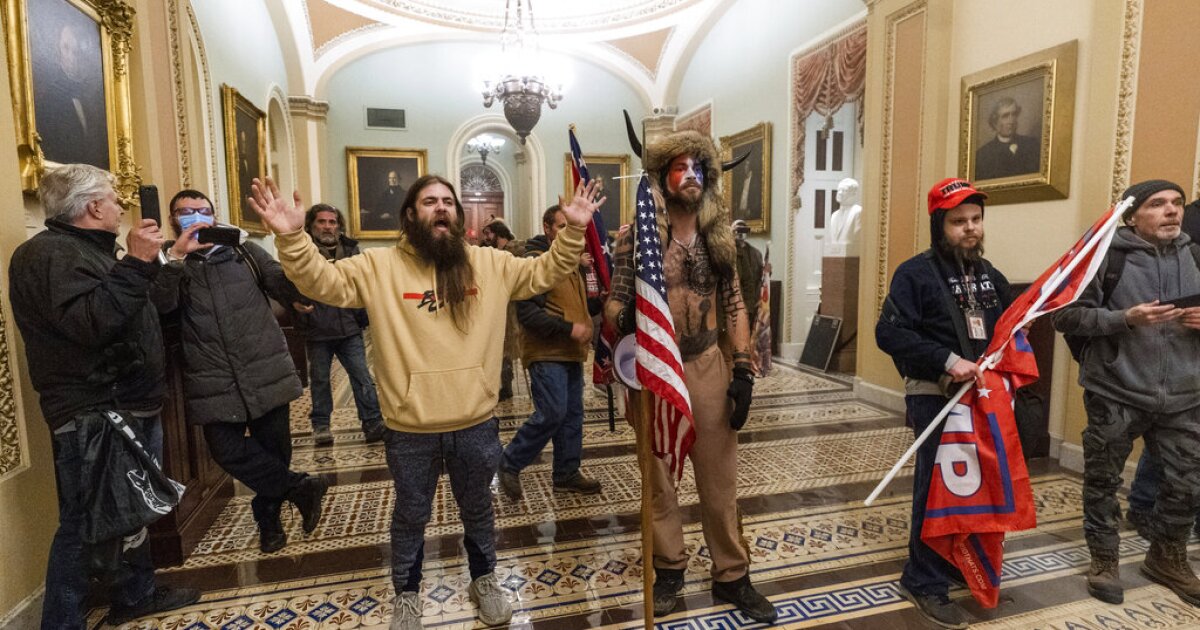 Federal prosecutors in the nation’s capital announced seven more arrests and criminal charges related to the Jan. 6 violent storming of the U.S. Capitol as the House voted to impeach President Trump on a charge of incitement of insurrection.

The U.S. Attorney’s Office provided new details on the charges against the seven men from around the country, a number of whom had photos of themselves inside the Capitol go viral online, one day after acting U.S. Attorney Michael Sherwin announced Tuesday that 170 subject case files had been opened and more than 70 specific criminal cases had been filed so far. Sherwin said that figure is expected to “geometrically increase” as he vowed that ”this is only the beginning.” He also revealed specialized strike forces were also looking into potential sedition charges and into attacks on law enforcement and the media.

Robert Packer, who went viral online for his Nazi sweatshirt with the words “CAMP AUSCHWITZ” emblazoned above a human skull, was arrested in Virginia on Wednesday, according to prosecutors who said he was charged with “knowingly entering or remaining in any restricted building or grounds without lawful authority” and “violent entry or disorderly conduct on Capitol grounds.” Photos of Packer show him as part of a crowd displaying a broken shard of nameplate from House Speaker Nancy Pelosi’s office.

An FBI special agent wrote that Packer “knowingly and willfully joined and encouraged a crowd of individuals who forcibly entered the U.S. Capitol and impeded, disrupted, and disturbed the orderly conduct of business by the United States House of Representatives and the United States Senate.” The agent described Packer’s garb as “a symbol of Nazi hate ideology” and said he was identified by law enforcement through news photos and a cooperating witness who identified Packer as a regular customer at a store near Newport News, Virginia.

Nicholas Rodean, who also went viral online — dressed in a red “Trump” hat, carrying a large red “Trump Is My President” flag, and wearing a badge from the Maryland restaurant where he worked — was arrested in Washington, D.C., on Wednesday. Prosecutors said he was charged with “knowingly entering or remaining in any restricted building or grounds without law authority,” as well as “engaging in disorderly conduct on Capitol grounds” and “parading, demonstrating, or picketing in the capitol buildings.” An FBI special agent said Rodean’s lawyer called the bureau late last week and Rodean asked to turn himself in.

Aaron Mostofsky, who was photographed and interviewed carrying a U.S. Capitol Police riot shield and wearing an officer’s bulletproof vest, was arrested in New York City on Tuesday and was charged with a felony count of the theft of government property. The son of a Brooklyn judge, Mostofsky was profiled in a New York Post video interview, where he declared he had stormed the Capitol because “the election was stolen” and pushed the baseless claim that “I don’t think 75 million people voted for Trump — I think it was close to 85 million.” An FBI special agent reviewed Mostofsky’s social media, where he posted Instagram videos of himself inside the Capitol, and a video taken by Mostofsky on a bus was captioned as “DC bound stopthesteal.”

William Pepe was photographed inside the Capitol, and an FBI special agent noted that Pepe was eventually identified as a member of the Metro Transit Authority who had used sick leave to travel to the nation’s capital last week. Pepe was charged with “knowingly entering or remaining in any restricted building or grounds without law authority” and was arrested in New York on Tuesday.

Kevin Loftus, who was charged with “knowingly entering or remaining in any restricted building or grounds without law authority” and with “violent entry and disorderly conduct on Capitol grounds,” was arrested Tuesday in Wisconsin. An FBI special agent said Loftus was identified based on pictures of him carrying an American flag posted on social media and in the media and that Loftus posted numerous clues on social media, including declaring that “i am wanted by the FBI for illegal entry.” The agent said a witness who went to school with Loftus said it was definitely him, and Loftus “also admitted to walking on what he thought was the top floor of the U.S. Capitol” during an FBI interview.

Andrew Williams and Josiah Colt were also charged Wednesday, though their criminal complaints do not seem to be publicly accessible yet. The Justice Department said Williams was charged with “unlawful entry of a restricted building” and “disorderly conduct on Capitol grounds” and was arrested in Florida on Tuesday, with court records showing he was released on a $25,000 bond. Colt was charged with “knowingly entering or remaining in any restricted building or grounds without lawful authority” and “violent entry and disorderly conduct on Capitol grounds.” He was arrested in Idaho on Tuesday.

Many of the charges related to storming the Capitol unlawfully could result in sentences of up to 10 years in prison, though the sentences will likely be more lenient.

Jacob Chansley, who also goes by Jacob Angeli or the “QAnon shaman” — a purveyor of the baseless conspiracy theory who is known for his costuming in horns, fur, and face paint — was charged in an amended criminal indictment after being photographed on the Senate dais last Wednesday. The six counts include that he “engaged in disorderly and disruptive conduct … when and so that such conduct did in fact impede and disrupt the orderly conduct of Government business and official functions, by forcing his way inside the United States Capitol and traversing the United States Capitol Grounds in an effort to prevent the Electoral College votes from being certified.”

Lonnie Coffman was hit with 17 criminal counts related to the 11 Molotov cocktails made of melted Styrofoam and gasoline found in his truck and the rifle, shotgun, and three handguns in his possession. Mark Leffingwell was charged with seven federal counts, including resisting arrest and punching a Capitol Police officer as part of a large mob that tried to push through a police barrier in the Senate wing of the Capitol building.

Federal investigators are looking into possible trespassing, theft of mail, theft of digital devices, assault on local and federal officers, theft of potential national security information, and felony murder. In addition, they are conducting a civil rights excessive force investigation.

Capitol Hill Police Officer Brian Sicknick died Thursday night “due to injuries sustained while on-duty” after he was “injured while physically engaging with protesters,” according to Capitol Police. A federal homicide investigation has been opened into his death. Four other people also died during the chaos.