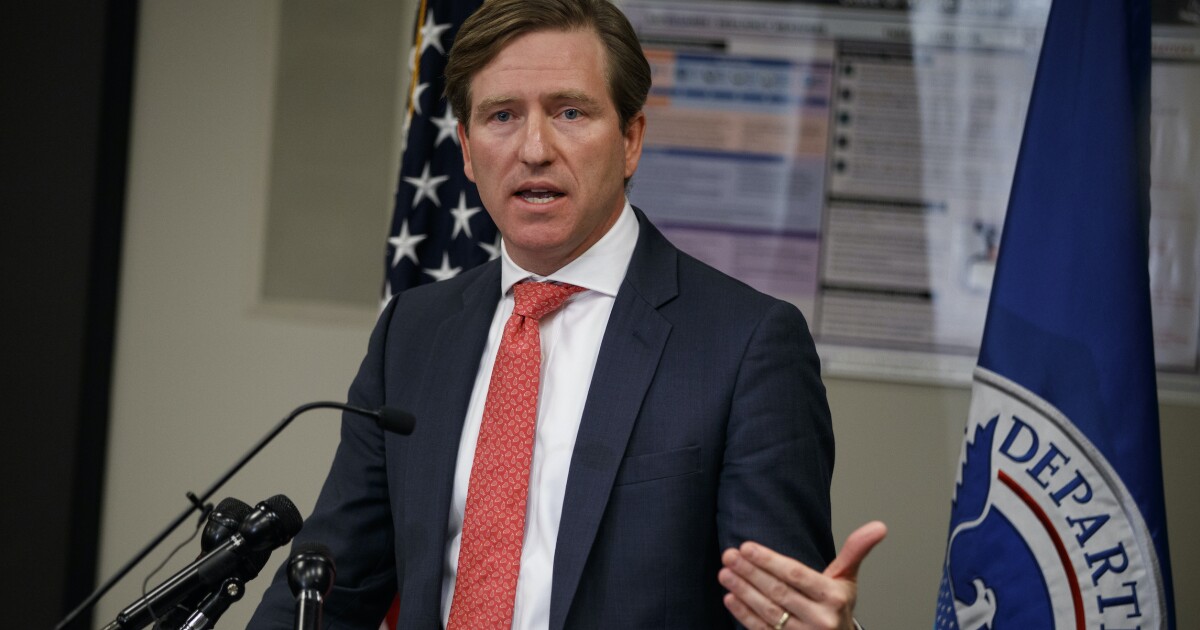 The fired head of the Homeland Security Department’s election security agency insisted that he and his team did “right” in 2020.

Chris Krebs, the former director of the Cybersecurity and Infrastructure Security Agency, spoke with CBS’s 60 Minutes in an episode that aired Sunday, stressing the United States should be confident in the outcome of the contest and that no domestic nor foreign actors changed any votes despite claims by President Trump and some of his supporters that the election was “rigged” or “stolen” to the benefit of President-elect Joe Biden.

“I have confidence in the security of this election because I know the work that we've done for four years in support of our state and local partners. I know the work that the intelligence community has done, the Department of Defense has done, that the FBI has done, that my team has done. I know that these systems are more secure. I know based on what we have seen that any attacks on the election were not successful,” Krebs said, adding, “There is no foreign power that is flipping votes. There's no domestic actor flipping votes. I did it right. We did it right. This was a secure election.”

Krebs said CISA worked with the Pentagon’s Cyber Command, the NSA, the FBI, the Secret Service, the Election Assistance Commission, election equipment vendors, as well as state and local governments. “There was no indication or evidence that there was any sort of hacking or compromise of election systems on, before, or after Nov. 3rd,” he said.

Trump, who fired Krebs after the election, tweeted his displeasure again Sunday.

“ 60 Minutes never asked us for a comment about their ridiculous, one sided story on election security, which is an international joke,” Trump claimed. “Our 2020 Election, from poorly rated Dominion to a Country FLOODED with unaccounted for Mail-In ballots, was probably our least secure EVER!”

Trump told Fox News on Sunday that he wished to file “one suit” alleging widespread voter fraud across the country, even though elections are run by individual states and counties, not the federal government, but that courts won't accept such a lawsuit from him.

With Trump-allied insiders distancing themselves from election fraud allegations made by Sidney Powell, the president's legal team announced last weekend that the attorney had no direct role in their efforts, and national security officials within the Trump administration said they had seen no evidence of Powell’s claims.

At a recent press conference in Washington, D.C., Powell claimed Dominion Voting Systems software was created “at the direction” of the late Venezuelan President Hugo Chavez to steal elections in his country, and that the machines “can set and run an algorithm that probably ran all over the country to take a certain percentage of votes from President Trump and flip them to President Biden.” Trump has repeatedly tweeted about Dominion.

Dominion has denied being involved in a vote-switching scheme. Dominion spokesman Michael Steel rebutted these claims, saying that “this is a nonpartisan American company” and “it is not physically possible for our machines to switch votes from one candidate to the other.”

A statewide hand-recount for the presidential election was triggered in Georgia and wrapped up earlier this month, affirming Biden as the winner by more than 12,000 votes and showing no evidence of the alleged vote switching. Another recount, requested by the Trump team, is now underway.

“All votes in the United States of America are counted in the United States of America. Period,” Krebs said in the interview that aired Sunday. “So again, there's no evidence that any machine that I'm aware of has been manipulated by a foreign power. Period … We can go on and on with all the farcical claims alleging interference in the 2020 election, but the proof is in the ballots. The recounts are consistent with the initial count, and to me, that's further evidence, that's confirmation that the systems used in the 2020 election performed as expected, and the American people should have 100% confidence in their vote.”

CISA and other election groups said this month that “there is no evidence that any voting system deleted or lost votes, changed votes, or was in any way compromised.”

The members of the Election Infrastructure Government Coordinating Council Executive Committee (which includes CISA as well as leaders from the Election Assistance Commission as well as state, local, and private sector officials) pushed back against allegations that U.S. voting machines had somehow been tampered with to steer votes from Biden to Trump.

“The November 3rd election was the most secure in American history,” the joint statement said.

The joint statement followed a viral tweet by Trump about Dominion allegedly switching or deleting votes. Dominion pushed back, saying it “categorically denies any claims about any vote switching or alleged software issues with our voting systems.”

CISA and the other election security groups stressed that “we can assure you we have the utmost confidence in the security and integrity of our elections.”

“The recent statement by Chris Krebs on the security of the 2020 Election was highly inaccurate, in that there were massive improprieties and fraud — including dead people voting, Poll Watchers not allowed into polling locations, ‘glitches’ in the voting machines which changed votes from Trump to Biden, late voting, and many more. Therefore, effective immediately, Chris Krebs has been terminated,” Trump said, adding, “The only thing secure about our 2020 Election was that it was virtually impenetrable by foreign powers.”

In the weeks since Election Day, the Trump campaign unsuccessfully sued numerous states and counties for alleged election irregularities. Biden has a projected 306-to-232 lead over Trump in the Electoral College. The Electoral College meets in mid-December and Inauguration Day is Jan. 20.