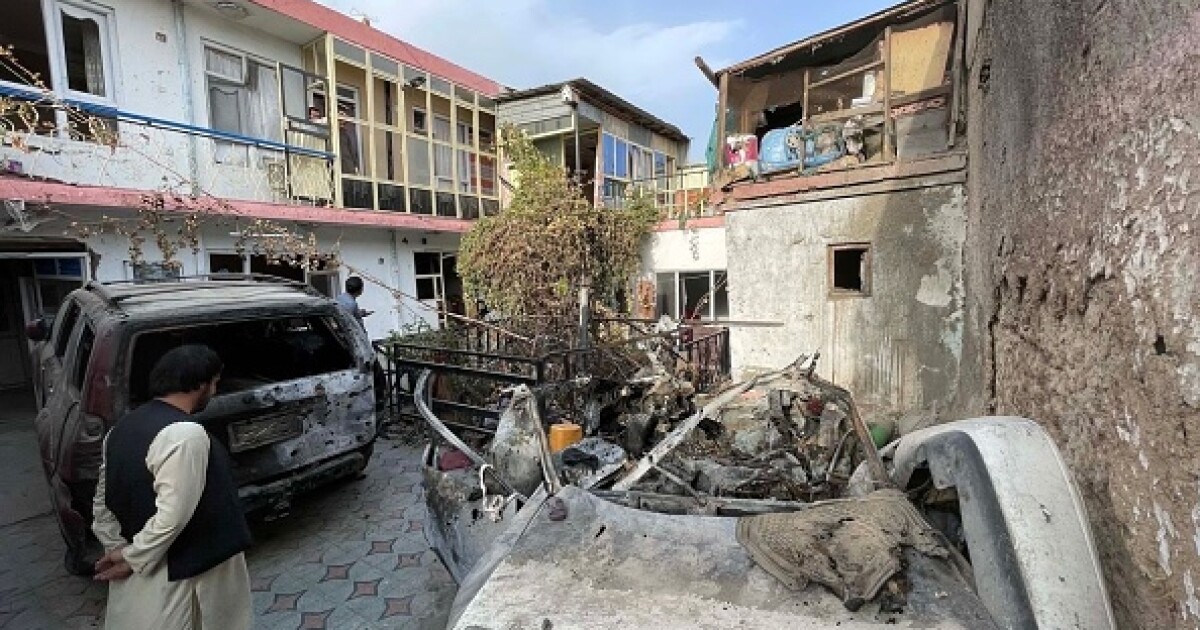 A top U.S. general attempted to distance the August airstrike in Kabul, Afghanistan, that killed 10 Afghan civilians from the “over-the-horizon” strategy the Biden administration has cited as a means of combating terrorism in the country.

Commander Gen. Kenneth “Frank” McKenzie of U.S. Central Command admitted Friday that the airstrike killed as many as 10 civilians, including seven children, as opposed to an ISIS-K terrorist, which was the initial belief. Gen. Mark Milley, the chairman of the Joint Chiefs of Staff, defended the Kabul airstrike on Sept. 1, calling it a “righteous strike.”

When a reporter noted the incident was previously described as an “over-the-horizon” strike and asked what it meant when it came to the reliability of future strikes, McKenzie pushed back.

“Let me be clear: This was a self-defense strike taken under self-defense rules of engagement based on an imminent threat to attack us,” McKenzie said. “That is not the way that we would strike in an OTH mission going into Afghanistan against ISIS-K targets.”

McKenzie continued: “For one thing, that will not be a self-defense strike, it will be done under different rules of engagement, and we will have a lot more opportunity, probably, than we had under this extreme time pressure to look at the target — to use a phrase that you’ll be familiar with, to soak the target with multiple platforms — to have an opportunity to develop an extended pattern of life. None of these things were available to us given the urgent and pressing nature given the imminent threat to our forces.”

A statement from the military on Aug. 29 announcing the strike explicitly called it an “over-the-horizon” operation, with CENTCOM spokesman Capt. Bill Urban saying: “U.S. military forces conducted a self-defense unmanned over-the-horizon airstrike today on a vehicle in Kabul, eliminating an imminent ISIS-K threat to Hamad Karzai International airport. We are confident we successfully hit the target.”

When McKenzie was asked on Friday about who gave the final go-ahead for the Kabul strike, McKenzie replied that it was “the over-the-horizon strike cell commander.”

Doubts about the strike's target crept in last week when the New York Times reported the victim was Zemari Ahmadi, a longtime aid worker employed by Nutrition and Education International, an organization from the United States. McKenzie contended a recurring piece of intelligence gathered by U.S. officials was that a white Toyota Corolla would be “a key element in the next attack,” which is the same vehicle driven by Ahmadi. However, it is a common car in Kabul.

U.S. officials began tracking his vehicle on the day of the strike when he appeared at a location believed to be a “key area of interest associated with imminent threats to the airport.”

The botched strike took place days after an ISIS-K suicide bomber detonated a device killing 13 U.S. service members and more than 170 Afghans outside the gates of Kabul airport.

McKenzie also argued Friday that “nothing we did was gathered from the Taliban” and that “we selected this car based on its movement.”

The day after the fall of Kabul, President Joe Biden argued the U.S. could withdraw from Afghanistan because the military had “developed counterterrorism over-the-horizon capability that will allow us to keep our eyes firmly fixed on any direct threats to the United States in the region and to act quickly and decisively if needed.”

Two weeks later, he said : “We have what’s called over-the-horizon capabilities, which means we can strike terrorists and targets without American boots on the ground — or very few if needed. We’ve shown that capacity just in the last week. We struck ISIS-K remotely … And to ISIS-K: We are not done with you yet.”

White House press secretary Jen Psaki echoed Biden’s sentiments, saying on Aug. 30: “Our capacities are over-the-horizon capacities — which, by the way, killed two ISIS terrorists just last week and continue to be utilized by our men and women on the ground.” A couple days prior to the disastrous Kabul airstrike, the Pentagon said two “high profile” Islamic State targets who allegedly helped facilitate bombings were killed in a U.S. airstrike in Afghanistan's Nangahar Province.

House Intelligence Committee Chairman Adam Schiff, a Democrat, said : “We need to know what went wrong in the hours and minutes leading up to the strike to prevent similar tragedies in the future. I am also concerned about the accuracy and completeness of public statements made in the immediate aftermath of the strike.”