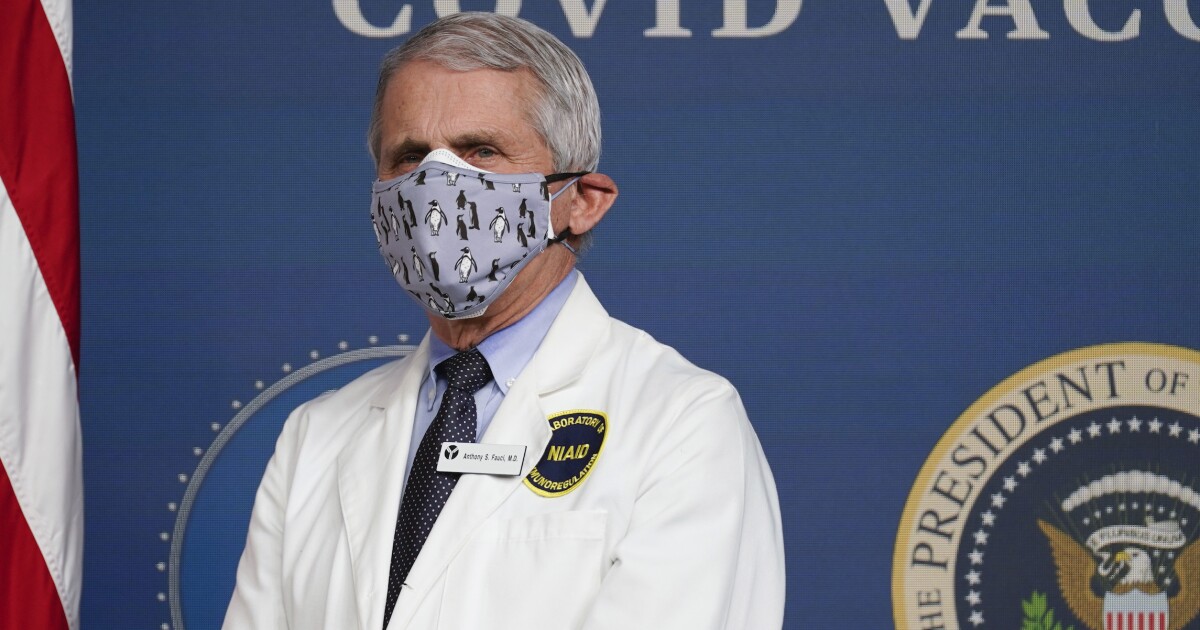 House Republicans want answers about the “dramatic change” in how a top scientist first talked about the coronavirus, from initially saying some of COVID-19’s features “(potentially) look engineered” to calling it a “crackpot theory” a few days later.

The GOP is focusing on a still-secretive teleconference call with Dr. Anthony Fauci and other scientists.

Rep. Jim Jordan of Ohio, the ranking member on the House Judiciary Committee, and Rep. James Comer of Kentucky, the top GOP member on House Oversight, sent a letter to Kristian Andersen, a professor of immunology at Scripps Research, asking him “to brief the committees about gain-of-function research conducted at the Wuhan lab and the possibility COVID-19 was engineered to be more contagious.”

Jordan and Comer wrote: “On the evening of February 1, 2020, you and several other international virologists participated in a conference call with Dr. Fauci. The American public does not know what happened on this call, as all emails pertaining to the content of the discussion have been redacted. But we do know what happened after.”

The Republicans pointed out that on Feb. 4, 2020, Andersen sent a letter to EcoHealth Alliance's Peter Daszak, saying: “The main crackpot theories going around at the moment relate to this virus being somehow engineered with intent and that is demonstrably not the case. Engineering can mean many things and could be done for either basic research or nefarious reasons, but the data conclusively show that neither was done.”

The Republicans said: “In three days, with no explanation as to why, you flipped your perspective entirely and began calling a theory you lent credence to only days earlier a ‘crackpot theory.’ It would appear the primary intervening event was the February 1, 2020 conference call with Dr. Fauci. We are very interested in understanding what happened on that call or what science came to light that caused such a dramatic change in your own hypothesis as to the engineering of COVID-19.”

Thousands of Fauci’s somewhat redacted emails from 2020 were released earlier this year, and they showed how he cast doubt on the Wuhan lab leak hypothesis.

An email from British researcher and Wellcome Trust Director Jeremy Farrar on Feb. 1, 2020, related to a “Teleconference,” was sent to Fauci, Andersen, Edward Holmes, a virologist at the University of Sydney, Robert Garry, a virologist at Tulane University, Andrew Rambaut, a professor of molecular evolution at the University of Edinburgh, and others, with the message noting that “information and discussion is shared in total confidence and not to be shared until agreement on next steps.”

Emails show Bill Gertz, a national security reporter for the Washington Times, messaged then-Vice President Mike Pence’s communications director, Katie Miller, on April 19, 2020, saying, “Dr. Fauci on Friday said he would share a scientific paper with the press on the origin of the coronavirus. Can you please help me get a copy of that paper?” Fauci responded to Gertz the next day, sharing three sources that argued in favor of a natural origin for COVID-19.

The first article shared by Fauci, which he appeared to have given some sort of input on, was a piece published in Nature on March 17, 2020, by Andersen, Holmes, Rambaut, and Garry. The piece argued in favor of COVID-19’s origin being a “zoonotic event” and would be widely cited to dismiss the lab leak hypothesis in the early months of the pandemic.

Andersen had sent Fauci, NIH Director Francis Collins, and Farrar an email on March 6, 2020, to “thank you again for your advice and leadership as we have been working through the SARS-CoV-2 ‘origins' paper” for Nature and to give them the chance to provide “any comments, suggestions, or questions about the paper or the press release.”

Rep. Chip Roy of Texas and other Republicans also wrote to Fauci this week, saying: “The Andersen paper led the narrative away from COVID-19’s potential lab origins. As Americans, we are deeply concerned by the appearance of discrepancies that largely influenced our understanding and approach to this virus.” The congressmen asked Fauci to “please provide the notes from the February 1, 2020 Farrar teleconference that were sent to you on February 2, 2020.”

Fauci repeatedly shared a Jan. 31, 2020, article for Science by Jon Cohen that skewed toward the natural origins hypothesis.

Cohen noted that Richard Ebright, a professor of chemistry and chemical biology at Rutgers University, told Sciencelnsider last year that the COVID-19 data was “consistent with entry into the human population as either a natural accident or a laboratory accident.” Cohen called this “conjecture,” then quoted Daszak, casting doubt on the lab leak hypothesis.

Fauci forwarded the article to Farrar and Andersen on Jan. 31, 2020, saying, “This just came out today. You may have seen it. If not, it is of interest to the current discussion.” Andersen noted that he was quoted in the “great” piece and suggested that the SARS-CoV-2 genome looked strange for a natural virus, replying, “The unusual features of the virus make up a really small part of the genome (<0.1%) so one has to look really closely at all the sequences to see that some of the features (potentially) look engineered. … I should mention that after discussions earlier today, Eddie [Holmes], Bob [Garry], Mike [Ferguson], and myself all find the genome inconsistent with expectations from evolutionary theory. But we have to look at this much more closely and there are still further analyses to be done, so those opinions could still change.”

In response to the email emerging earlier this year, Andersen tweeted: “We seriously considered a lab leak a possibility. However, significant new data, extensive analyses, and many discussions led to the conclusions in our paper. … The conspiracies have created a narrative where we all ‘dismissed it out of hand.’ That's absurd and couldn't be further from the truth.”