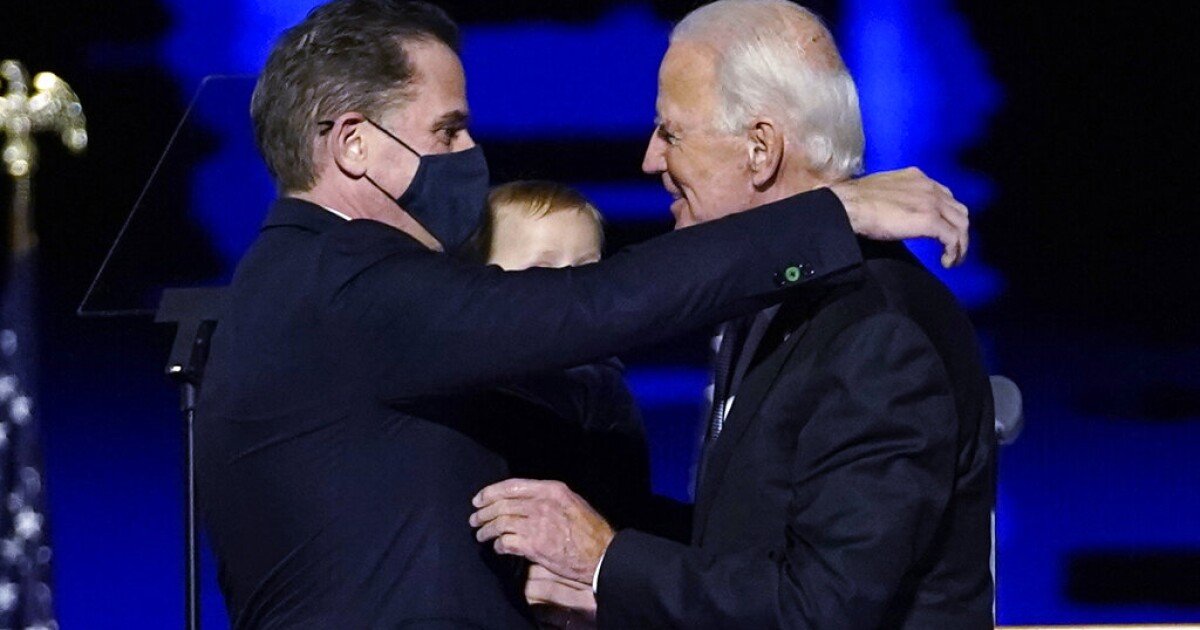 Joe Biden’s son, Hunter, is under criminal investigation as federal authorities scrutinize his foreign business dealings, and while the full scope of the federal inquiries have not been made public, the younger Biden’s financial dealings with China are likely at the forefront.

Concerns about Hunter Biden gained broader attention last week after multiple outlets reported that he is being investigated in connection to his taxes and overseas business with China and other countries in a federal inquiry that was opened as far back as 2018. President-elect Joe Biden’s campaign, along with many in the media, had dismissed the Hunter Biden laptop story and other allegations as being part of a Russian disinformation operation, even though Director of National Intelligence John Ratcliffe said that “there is no intelligence that supports that … Hunter Biden’s laptop is part of some Russian disinformation campaign.”

It was reported by CNN last week that “investigators appear to be focused on Hunter Biden's business activities connected to China” and “at least one of the matters investigators have examined is a 2017 gift of a 2.8-carat diamond” that Biden received from Chinese tycoon Ye Jianming in 2017. Politico reported that “investigators in Delaware and Washington were … probing potential money laundering and Hunter Biden’s foreign ties.”

Most of the details about the federal investigation into Joe Biden’s son remain unknown, but emails from a laptop belonging to the younger Biden, a trove of documents made public by former business partner Tony Bobulinski, Senate reports focused on his shady business dealings, and years of reporting on his forays in China and elsewhere provide solid clues.

A couple of weeks after the November election, Senate Finance Committee Chairman Chuck Grassley and Senate Homeland Security Chairman Ron Johnson unveiled a “supplemental” to the report they published in late September.

“These new records confirm the connections between the Biden family and the communist Chinese government, as well as the links between Hunter Biden’s business associates and the Russian government, and further support the Committees’ September 23, 2020 report’s finding that such relationships created counterintelligence and extortion concerns,” the senators wrote.

Back in 2017, Bobulinski worked with James Biden, Joe's brother, Hunter Biden, and others to create a business dubbed SinoHawk, formed to establish a joint venture with a Chinese Communist Party-linked business, CEFC China Energy, a massive conglomerate run by Ye, who has since disappeared in China.

Bobulinski repeatedly expressed in messages in 2017 to his business partners and in emails to CEFC that he expected the venture to get off the ground with $10 million in startup money from the Chinese businessman. The money never showed up, but Grassley and Johnson concluded that millions of dollars were ultimately sent by CEFC to accounts linked to James and Hunter Biden instead. In October, Bobulinski also corroborated the authenticity of a May 13, 2017, email found on Hunter Biden’s laptop from investor James Gilliar to himself, Hunter Biden's business associate Rob Walker, and James and Hunter Biden detailing a business deal between CEFC and themselves, which included a reference to money for “the big guy” — who Bobulinski claims was Joe Biden.

The Senate report from September concluded that Hunter Biden “received a $3.5 million wire transfer from Elena Baturina, the wife of the former mayor of Moscow” and that he also “opened a bank account with” CEFC deputy Gongwen Dong to fund a $100,000 global spending spree with James Biden, and James's wife, Sara.

Hunter Biden made it clear in a May 1, 2017, text to Bobulinski that one of his goals was to avoid violating the anti-bribery Foreign Corrupt Practices Act or having to register as a foreign agent. Grassley recently pressed the Justice Department for answers on whether Hunter and James Biden should have been required to register as foreign agents.

When Patrick Ho, one of Ye’s lieutenants, was charged by the Justice Department in 2017, the first call he reportedly made after his arrest was to James Biden, who has said he thought the call was meant for Hunter Biden. Ho was indicted and convicted under the Foreign Corrupt Practices Act for his role in a global money laundering and bribery scheme aimed at government officials in Africa. Ho was sentenced to three years in prison in March 2019 and was deported to Hong Kong in June. Ho tried reaching out to Joe Biden's son for help because he agreed to represent Ho as part of his efforts to work out a natural gas deal in the U.S. with Ye.

The November report noted that, in 2017, Ye was “actively working to build CEFC by making investments around the world” and “these efforts involved cultivating ties with Russia and actors connected to Russian President Vladimir Putin.” The senators said that “during the time that Ye’s companies were sending millions of dollars to Hunter Biden associated companies, Ye had business dealings with Kremlin-controlled companies and Kremlin-aligned businessmen” and that “Ye appears to have been China’s unofficial bridge to Russia on energy.” The Senate investigators added that CEFC announced in September 2017 it would buy a 14.2% stake in Rosneft, a Russian state-owned energy company, for roughly $9 billion, and CEFC agreed to a multibillion-euro loan deal with the Russian state-owned VTB Bank to finance it, and that “Hunter Biden was in close contact with Ye in 2017 and was aware of these developments.”

Hunter Biden texted Bobulinski in October 2017 that he “stayed out of that Russian mess” but still “discussed the Roseneft [sic] deal” with Ye. Hunter Biden described a close relationship with Ye, including regular meetings, weekly calls, visiting Ye’s apartment, and helping Ye “on a number of his personal issues (staff visas and some more sensitive things).”

Joe Biden said during the presidential debate in late October that he has “not taken a penny from any foreign source ever in my life.”

“I have heard Joe Biden say that he has never discussed business with Hunter,” Bobulinski said before the second presidential debate. “That is false. I have firsthand knowledge about this because I directly dealt with the Biden family, including Joe Biden.”

“Joe Biden has never even considered being involved in business with his family nor in any overseas business whatsoever,” Biden campaign spokesman Andrew Bates told the Washington Examiner at the time. “He has never held stock in any such business arrangements nor has any family member or any other person ever held stock for him.”

Grassley and Johnson also noted in September that they had acquired Treasury Department records that “in addition to providing new and descriptive details about the nature, origin, and extent of payments from Burisma Holdings to Hunter Biden,” also “shed light on a much broader array of questionable financial transactions involving Hunter Biden, other members of the Biden family, and their associations with foreign nationals.”

The report alleged that “these foreign nationals have questionable backgrounds that have been identified as being consistent with a range of criminal activities, including but not limited to organized prostitution and/or human trafficking, money laundering, fraud, and embezzlement.”