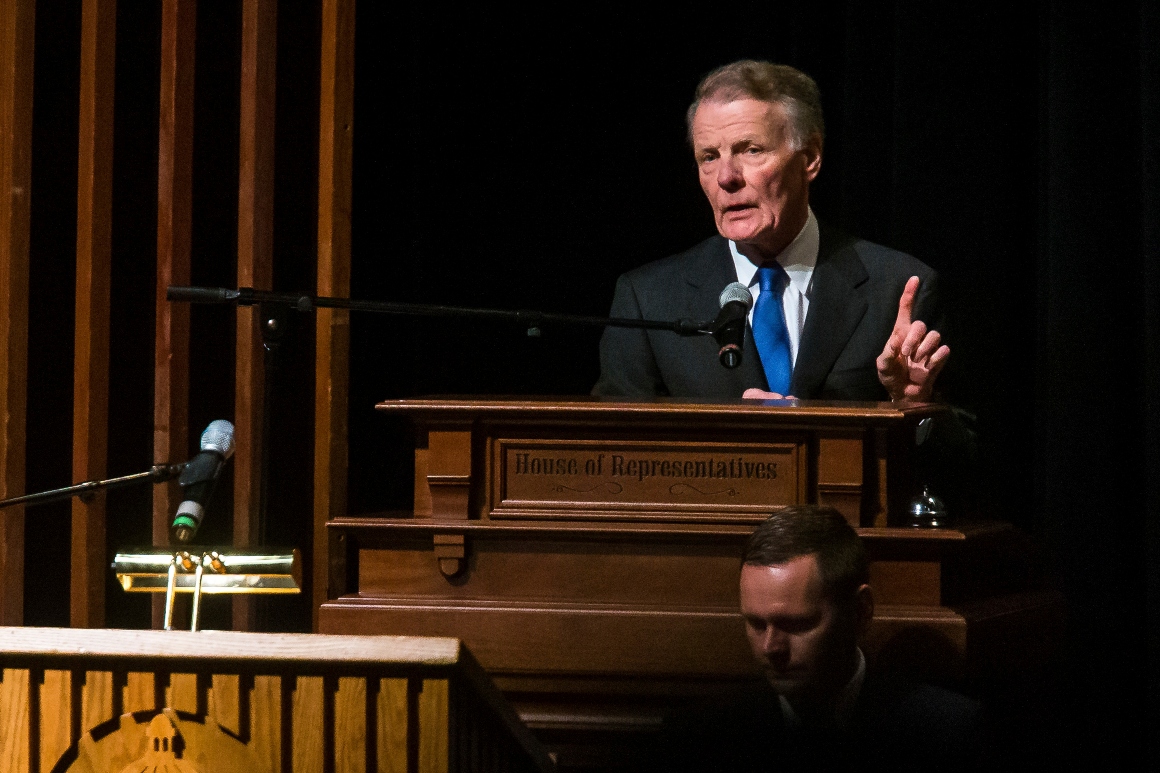 “This reflects a big change in what people in Illinois are expecting out of government,” Cook County Assessor Fritz Kaegi, who defeated a machine-style politician two years ago, said Friday. “Basically, we have one of the last old-school political machines in the country. Madigan’s a lineal descendant of that tradition and people don’t think it works. It has caused tremendous fiscal problems in the state.”

Earlier this week, federal prosecutors charged one of Madigan’s confidants and three former ComEd executives in an alleged scheme to give no-work jobs and internships to Madigan allies in exchange for favorable legislation. Madigan has not been charged, but he was quickly identified as “Public Official A” in federal documents because the official is described as the Illinois speaker, a position only two people have held in nearly 40 years.

Madigan's exit would bring practical concerns for Democrats, and not just in Illinois: Despite having a Democratic supermajority, the speaker’s allies in labor and in the General Assembly worry ousting Madigan now could jeopardize their control over the next redistricting process, which begins in 2021. There is also fear around being alienated from him and “The Program,” Madigan’s fundraising operation and an army of volunteers that help candidates win campaigns.

Madigan, known as the “Velvet Hammer,” could afford to lose only 13 votes in the Illinois House and hold on as speaker — a figure he hit early this week. By Thursday night, 17 had defected as he sought to defend himself (the number grew to 18 on Friday morning).

“Some individuals have spent millions of dollars and worked diligently to establish a false narrative that I am corrupt and unethical. I have publicly ignored their antics because those who know me and work with me know that this rhetoric is simply untrue,” Madigan said in a two-page statement issued Thursday.

The Illinois GOP struggles to fund campaigns in a state dominated by Democrats, but the ComEd angle — and it's connections to Madigan, who also chairs the Illinois Democratic Party — gave them a clear target. Republican candidates across the state capitalized on the investigation, which was announced in July, using it to slam Democratic incumbents and newcomers alike in the Nov. 3 election.

Although President Donald Trump is credited with turning out his base all over the country, some Democrats say the specter of corruption in Illinois helped tank Democratic campaigns for Congress and the General Assembly. And as the election fallout ripples and news of the investigation trickles out, a growing number of high-profile Democrats have called out Madigan.

Earlier this month, Sen. Dick Durbin (D-Ill.) stunned political veterans in the state with a television interview in which he laid Betsy Dirksen Londrigan's House loss at Madigan's feet.

“All across our state — and the advertising told the story — we paid a heavy price for the speaker’s chairmanship of the Democratic Party,” Durbin told WTTW on “Chicago Tonight.” “Candidates who had little or no connection with [Madigan] whatsoever were being tarred as Madigan allies who are behind corruption and so forth and so on.”

Our must-read rundown of political news in the Land of Lincoln.

Similarly, Sen. Tammy Duckworth (D-Ill.) has called for Madigan to step down as party leader.

Democratic Gov. J.B. Pritzker blamed the cloud of corruption for influencing voters to reject a progressive income tax ballot initiative. The measure was a signature piece of Pritzker’s plan to help turn around the state’s financial ship and further cement his liberal credentials.

“If Speaker Madigan wants to continue in a position of enormous public trust with such a serious ethical cloud hanging over his head, then he has to at the very least be willing to stand in front of the press and the people and answer every last question to their satisfaction,” Pritzker told reporters Thursday.

Strong as his statement was, the governor didn't call outright for Madigan's resignation and instead gave him something of an out. Written statements, Pritzker said, “are not going to cut it. If the speaker cannot commit to that level of transparency, then the time has come for him to resign as speaker.”

Pritzker must weigh his own political ambitions as he looks to reelection in 2022; Republican campaigns are sure wield Madigan as a top talking point.

But it’s the lawmakers in the state House who have the most power to decide Madigan’s future in the face of his denials of wrongdoing.

The cracks in Madigan’s veneer started before the ComEd investigation. Two years ago, his office came under scrutiny for sexual harassment. A few veteran aides were fired, but female lawmakers haven’t forgotten and have led much of the opposition to Madigan staying on as speaker.

“Women are tired of the system being rigged against them, tired of the old boy network and tired of having to put up with bad behavior, ethical challenges and a complete disregard for a higher standard of ethics and morality when you’re in a position of leadership,” said state Rep. Stephanie Kifowit, who so far is the only representative who’s put her hat in the ring to run against Madigan as speaker.

Madigan still has his supporters and some legislators have hinted at supporting the speaker in January if he commits to make it his last. Union leaders and others credit Madigan with pushing back against Bruce Rauner, a one-term Republican governor whose austerity measures added to a budget morass that the state is still struggling with today.

“We have a raging pandemic, a precarious economy, a huge budget hole, and we might be coming into one of the toughest budget-making sessions we’ve ever had,” Michael Sacks, a top Democratic donor and supporter of Joe Biden, said before the latest drip of the ComEd scandal. “The idea that we don’t have all of our best players on the field protecting social services, education, working families and other things Democrats care about is nonsensical.”