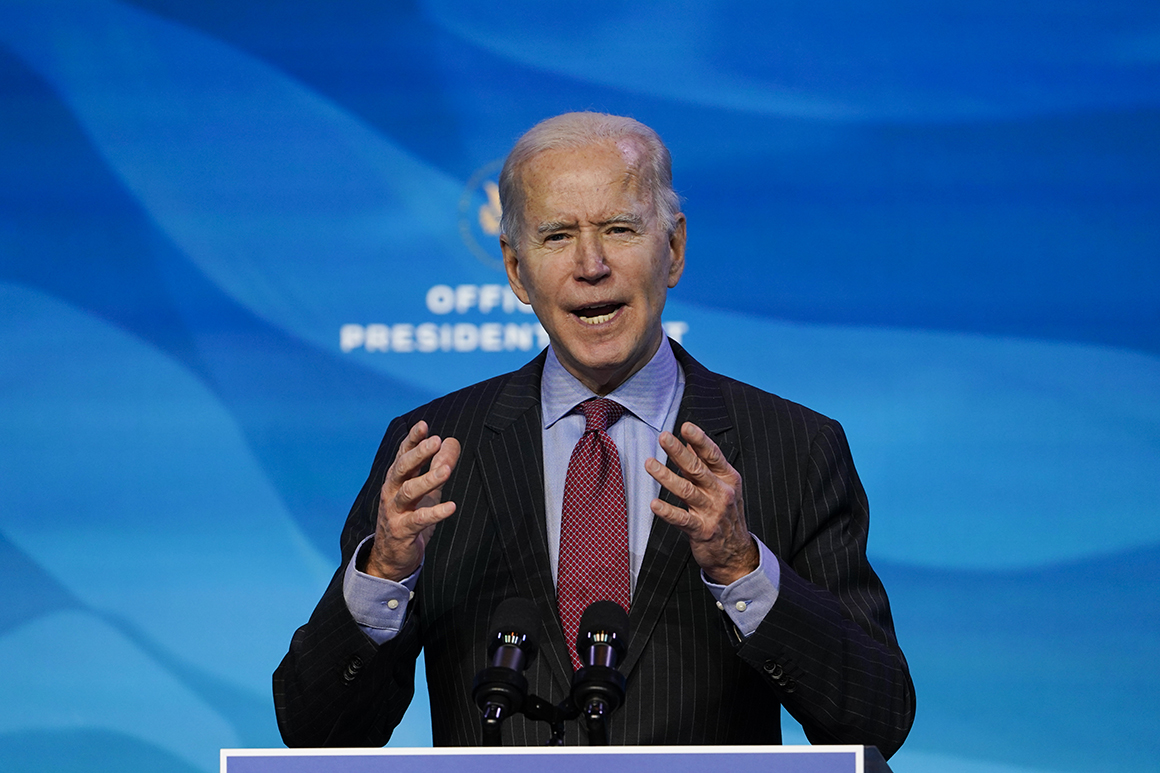 In preparation for the 2022 midterms, the president-elect is fusing his political operation with the Democratic National Committee. He is also considering sending a top communications staffer — among those discussed are top campaign spokespeople Andrew Bates and T.J. Ducklo — to the DNC for the next several months as an embed before that person heads to the White House themselves. The idea is to help ensure the DNC is integral to the Biden operation, a source close to the campaign said in an interview.

Biden is also empowering his former campaign manager, Jen O’Malley Dillon, with his political portfolio in and out of the White House. Dillon, herself a former top national party staffer, is steering DNC meetings in the run-up to the election of a new chair and officers later this month.

Biden is also committed to pumping resources into state Democratic parties that atrophied during the Obama years, according to a Biden official, cognizant of the shortcomings of the last Democratic president’s approach. Rather than build out his own infrastructure, like Obama did, his team is in conversations with battleground state directors about the upcoming midterms and preparing to bulk up outreach to rural voters, with early conversations about having Agriculture secretary nominee Tom Vilsack serve as a possible surrogate.

The strategizing comes as the Democratic Party navigates a new, unsettled landscape, with lingering questions about whether Biden intends to run for a second term. The stakes are high for the party, which must figure out how to keep a congressional majority in both houses and also contend with reapportionment in two years.

No modern president has had a successful first midterm absent George W. Bush in the wake of 9/11. After Obama’s “shellacking,” Trump was pummeled during the 2018 elections. But although history is unkind, Democrats say it’s too early to predict doom for Biden already. Obama campaign manager David Plouffe said the president-elect cannot “govern through the prism of maintaining majorities,” but at the same time, must advance concrete agenda items if he wants to have success in 2022.

“If you do small things and you do the bare minimum, you’re probably going to pay a price for that. It’s bad for the country and bad politics,” said Plouffe. “There will be polls saying, ‘voters only want Biden to deal with the pandemic.’ You can’t govern based on that. On climate change, on taxes, on voting rights on any number of issues, you’ve got to make progress in these first two years.”

But there is also some cautious optimism in the party. Senior Democrats predict that Biden is less prone to suffer the same political setbacks as his predecessors, including the man he served as vice president.

“He’s a different person than Obama,” said former Senate Majority Leader Harry Reid. “Obama was very unique; he had a gift of communication. He could speak as well as anyone who’s ever held the presidency. Joe Biden is someone who is coming to the presidency as well prepared as anyone can be.”

Much of the success of Democrats in the midterms is tied to the legislative agenda they pursue before it — a reality that hasn’t escaped Biden’s allies and advisers.

Biden is preparing to push populist themes, like larger stimulus checks and mass vaccination programs for Covid-19 relief. Democrats believe they are the kinds of policies that could bring more immediate political returns than a sweeping overhaul of the health care system, which became a short-term liability for the party in 2010.

The focus on opening schools, small businesses and stadiums by the fall “is ultimately going to dominate the 2022 cycle in the same way that health care did in 2010,” said Tom Perriello, the former Democratic congressman from Virginia, who lost his seat that cycle.

“You need to deliver results that you can point to. If the original House version of the Affordable Care Act passed in the first 100 days, we would have all been fine in 2010,” Perriello said. “We would have had cheaper negotiated drug rates, for example, and by the fall of 2010, we could point and say, ‘You're paying less for prescription drugs today.’ … That's something you can run on it.’”

For Democrats, there are fears that getting a handle on the pandemic — while immensely difficult in its own right — will not be enough politically. Paul Begala, the famed Bill Clinton adviser, said the mantra of the 1992 campaign — “It’s the economy, stupid.” — still applies today.

But a popular agenda — even one that creates jobs — still has to be communicated to voters. And that requires an effective campaign infrastructure to be in place. On that front, Majority Whip Jim Clyburn said there’s room for improvement.

A powerful Democrat from South Carolina who is close with Biden, Clyburn said that Democrats should expand their map in two years and invest more heavily in local canvassing and less in TV ads.

Though he is one of Biden’s most prominent allies, Clyburn was critical of the decision last year by the Biden campaign to halt door-knocking amid the pandemic. The campaign later reversed course, but Clyburn still blamed Jaime Harrison’s November loss to Republican incumbent Lindsey Graham in the South Carolina Senate race on a lack of canvassing work.

“Jen O’Malley’s — all I’m saying is, is that her kind of politics? I don’t know,” he said of Biden’s campaign manager. “I remember her doing an announcement and we raised holy hell during the campaign.”

Those who have worked with O’Malley Dillon say that the criticism that she’s not attentive to organizing is off base. They note her own personal history in the field and that she was trying to balance the demands of a campaign with the realities of Covid.

“She’s just second to none when it comes to building a scaled field effort,” said Lauren Groh-Wargo, CEO of Fair Fight Action and Stacey Abrams’ 2018 campaign manager. Groh-Wargo had brought in O’Malley Dillon to coach field staff and train local operatives in that campaign. “You have to make choices, and the Biden team was clear — all Democrats were clear in the general election — our No. 1 goal was to keep people safe, period. So up and down the ballot, Democrats were incredibly cautious on door-knocking.”

The Biden team is already connecting with battleground states operatives, including in Wisconsin, where a U.S. Senate seat and governorship are up for grabs in two years.

Ben Wikler, the Wisconsin Democratic Party chair, said he’d been in direct contact with the president-elect’s staff to talk “about the necessity for ongoing support and engagement for state parties and they are totally on the same page.”

Lauded for the work he’s done to build up the state party, Wikler said the Biden team shared his approach and, in fact, was already building on the existing state-level infrastructure.

“It’s worth underscoring, typically when a presidential campaign rolls in, they sweep the dishes off the table before setting up the new places,” said Wikler. “With the Biden campaign, they deeply integrated with infrastructure that state parties have been building for years.”

In many ways, Democrats say, Biden is the antithesis to Obama. The latter was never a creature of party politics. He shunned the DNC and, instead, launched a separate entity, Organizing for America, that essentially competed with the committee. Biden, by contrast, is a 78-year-old creature of Washington and is poised to work hand-in-hand with the party. O'Malley Dillon is sitting in on DNC discussions about officers and the next chair, a role Harrison is expected to assume, according to two sources close to the discussions.

Many of those comparing Biden and Obama as heads of the party concede that they arrived from very different places and at times in their careers that are hard to juxtapose. Obama ran against the Clintons — and all of their relationships and accrued power — before opting to create his own political apparatus.

The party suffered financially during the Obama years and kept its leadership despite severe losses in 2010. At the end of 2010, the DNC was $16 million in debt and had $9 million on hand.

Today, the DNC emerged from the presidential election with no debt and, as of a December filing, had $24 million on hand; though fundraisers warn they’re confronting donor fatigue and are embarking on an era in which Trump isn’t an omnipresent boogeyman to rile up donors.

“We broke every fundraising record in the history of politics, but that’s not sustainable,” said Rufus Gifford, Biden campaign deputy manager who served as DNC finance director at the start of the Obama administration. He said of efforts moving forward: “Party fundraising is a completely different animal than running against Donald Trump. It’s going to be tough, but it’s nice when you’re not starting in the red.”

As a model for the midterm elections, Democrats and Biden officials point to the Georgia Senate run-offs that gave the party a Senate majority for — in all likelihood — at least the next two years.

Biden’s team steered nearly $20 million to help Jon Ossoff and Raphael Warnock claim the Senate seats, including hard dollars and dedicating staff support and voter data. Biden and Vice President-elect Kamala Harris, who made a combined three trips to Georgia ahead of the November election, returned to the state in the closing days of the January runoff. President-elect Obama faced a similar decision late in 2008, and while he dispatched field organizers for that Senate runoff in December between GOP then-Sen. Saxby Chambliss and Democrat Jim Martin, Obama refused to spend much of his own political capital on the election, and didn’t travel there late in the campaign, despite Democrats’ hopes of notching a 60-seat filibuster-proof Senate majority.

“We have learned lessons from the past,” a Biden official said. “Things did not work as smoothly and the work was not as closely aligned, and the president-elect wants to ensure there is cohesion and a seamless, productive working relationship that will support not only his agenda, but also lift up state parties and political candidates up and down the ballot.”