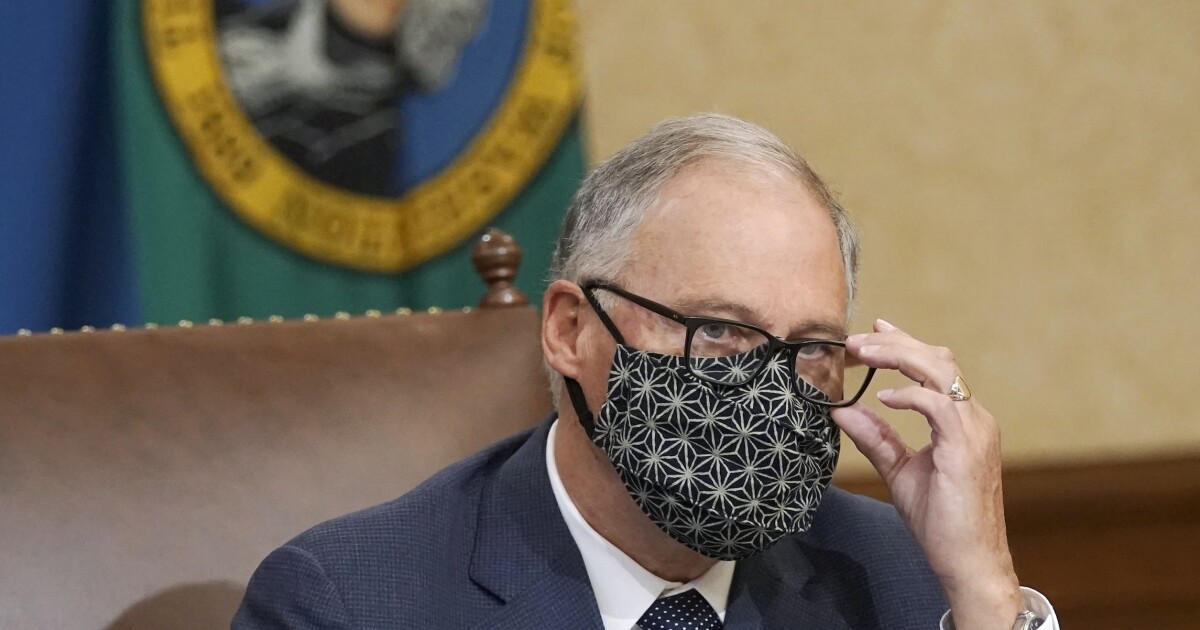 At an impromptu Sunday news conference, Washington Gov. Jay Inslee announced the state will be entering a month-long lockdown.

Under the order, restaurants and bars statewide are closed until further notice and limited to take-out only. Gyms, bowling alleys, theaters, museums, and zoos are also closed per Inslee's restrictions.

Wedding and funeral ceremonies are limited to 30 people while religious services are capped at 25% indoor occupancy or 200 people, whichever is fewer, and no choirs or bands.

Grocery stores and retailers are also limited to 25% capacity as are business offices. Long-term care facilities are permitted to hold outdoor visits only.

“A pandemic is raging in our state. Left unchecked, it will assuredly result in grossly overburdened hospitals and morgues and keep people from obtaining routine but necessary medical treatment for non-COVID conditions,” Inslee said. “Left unchecked, our economic devastation will be prolonged, and, most importantly, we will see untold deaths. We will not allow this to happen.”

The Washington State Department of Health reported 2,233 new cases of COVID-19 on Saturday, marking the second day it reported more than 2,000 cases.

Inslee's restrictions take effect Monday, Nov. 16. They remain in effect until Monday, Dec. 14. Restaurants will shut down by Wednesday, Nov. 18.

On Friday, Washington joined Oregon and California in instituting a travel advisory urging members of the public coming or returning from out-of-state to self-isolate for 14 days.

The state has seen an uptick in cases since September and began seeing daily averages of more than 1,000 cases a day since the end of October.

According to estimates from the Washington Hospitality Association released on Friday, hospitality sales are down 45% statewide.

The WHA has reported the hospitality industry lost 191,000 jobs during Inslee's last shutdown order in March and regained only 100,000 of those jobs.

The Washington Employment Security Department reported that the state's unemployment rate in September was 7.8% – less than half the 16.3% statewide unemployment rate seen in April. WHA members fear that number is set to rise.

Anthony Anton, CEO and president of the association, said 35% of restaurants are at risk of closing down permanently.

Just last year, Washington's Budget Stabilization Account or its “Rainy Day Fund” totaled more than $1.6 billion. In April, the fund was estimated to equal about 8% of the state's entire general fund spending.

The state received $2.95 billion from the federal CARES Act in March. It allocated at least $786 million to its four largest counties – King, Snohomish, Pierce, and Spokane—as well as $297 million to smaller local governments.

Inslee further announced on Sunday that the state plans to distribute $50 million in aid for Washington's more than 600,000 small businesses. Republican state lawmakers say more relief is needed ahead of the temporary shutdown.

Republican House Minority Leader J.T. Wilcox joined his colleagues in calling on Inslee to convene a special legislative session to tap into the state's Rainy Day Fund. Wilcox said lawmakers could do the deed within “24 hours notice.”

Washington Republicans have repeatedly called on Inslee throughout the year to balance the state budget in light of the state's $4.5 billion budget deficit.

“Senate Republicans can be ready with a day’s notice to convene an emergency special session, as we’ve asked the governor to do repeatedly,” Schoesler said. “The Senate has prepared to do that virtually or in a modified format to ensure social distancing. We need more voices at the table on these decisions and support legislative action. There would likely be far more widespread support for safety measures if they weren’t being dictated to us by one man.”

Inslee has not made any indications on whether a special session is in play.

Another 9,281 people around the state have been hospitalized from the virus. Hospitals statewide are seeing average capacity rates of 62%.

The Washington state legislature reconvenes for its next regularly scheduled session on Jan. 11, 2021.