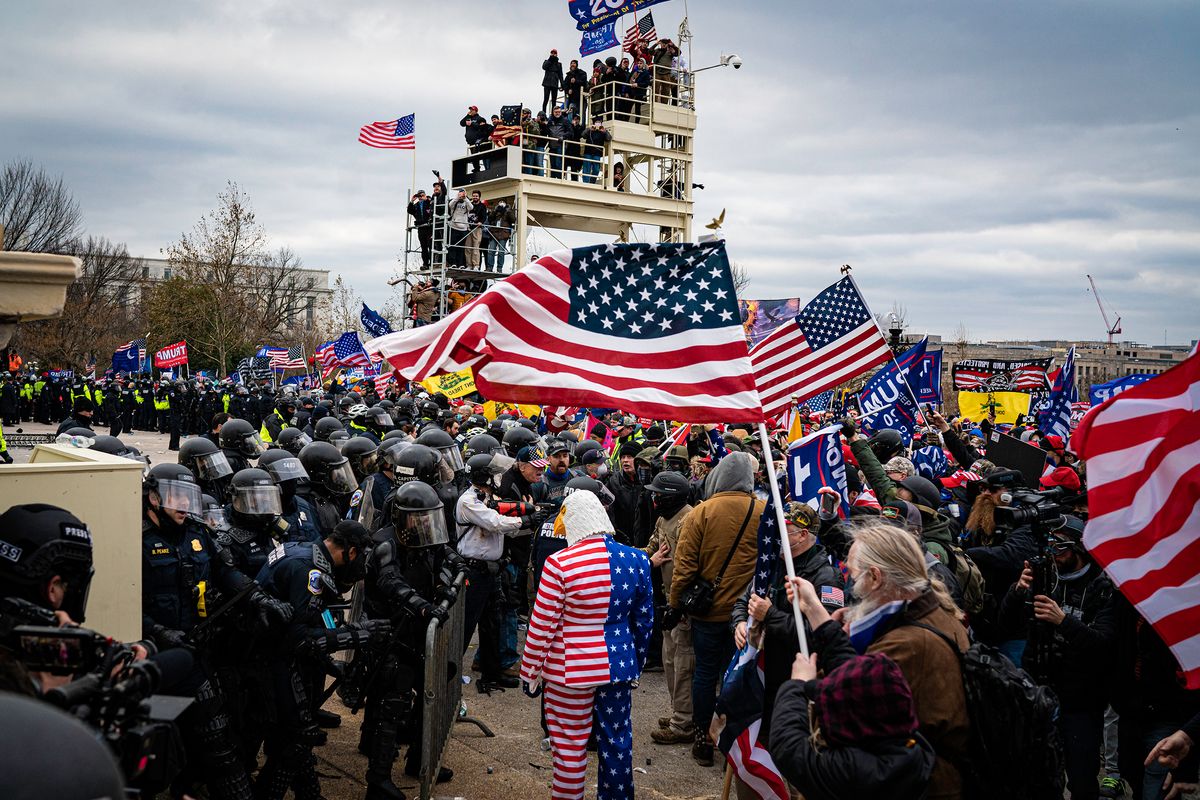 Nobody knew exactly how that belief would manifest itself; I certainly never expected to see platoons of insurrectionists scaling the walls of the U.S. Capitol and sacking the place in broad daylight. Still, shocking as this was, it wasn’t a bit surprising. The attempted coup d'état had been unfolding in slow motion over the previous nine weeks. Anyone who couldn’t see this coming chose not to see it coming. And that goes for much of the Republican Party.

I spend a lot of time around Trump voters. It’s a part of my everyday life, engaging with family and friends in Michigan. It’s been the heartbeat of my work in this election cycle, traversing America to figure out what ordinary folks are thinking about. I’ve learned a lot along the way. And there’s one conclusion of which I’m certain: The “fringe” of our politics no longer exists. Between the democratization of information and the diminished confidence in establishment politicians and institutions ranging from the media to corporate America, particularly on the right, there is no longer any buffer between mainstream thought and the extreme elements of our politics.

All of that was before the president alleged the greatest conspiracy in American history.

For the past nine weeks, I’ve had a lot of highly unusual conversations with administration officials, Republican lawmakers and conservative media figures. I describe these conversations as highly unusual because what I was trying to glean from them, more than gossip or inside information, was a sense of integrity and discernment. Based on my reporting, it seemed obvious the president was leading the country down a dangerous and uncharted road. I hoped they could see that. I hoped they would do something — anything.

My fears were not assuaged. Some of them expressed mild concern but told me there was no point crossing the president when he’d be leaving office soon anyway. Others laughed off the trepidation altogether. More than a few told me I was being “hysterical,” at which point things got heated, as I would plead with them to consider the consequences if even a fractional number of the president’s most fervent supporters took his allegations, and his calls to action, at face value. When I submitted that violence was a real possibility, they would snicker. Riots? Looting? That’s what Democrats do!

So convinced were the president’s allies that his rhetoric was harmless that many not only rationalized it, but actually dialed it up. Lindsey Graham, the South Carolina senator who once skewered Trump’s dishonesty, promised “earth-shattering” evidence to support his former rival’s claims of a rigged election. House Minority Leader Kevin McCarthy insisted that “President Trump won this election,” told of a plot to cheat him and alerted the viewers watching him on Fox News, “We cannot allow this to happen before our very eyes.” Texas senator Ted Cruz, who famously called Trump “a pathological liar,” himself lied so frequently and so shamelessly it became difficult to keep up. Dozens of other congressional Republicans leveled sweeping, unsubstantiated allegations of mass voter fraud, some of them promoting the #stopthesteal campaign online.

From party headquarters, the Republican National Committee’s chairwoman flung reckless insinuations left and right as her top staffers peddled a catalogue of factually inaccurate claims. The two Republican senators from Georgia, desperate to keep in Trump’s good graces ahead of their runoff elections, demanded the resignation of the Republican secretary of state for no reason other than the president’s broad assertions of corruption, none of which stood up to multiple recounts and investigations by GOP officials statewide. Local lawmakers in states like Michigan and Wisconsin told Republicans they’d been cheated, citing the suspicious late-night counting of mail ballots, when they were the ones who had refused to allow those ballots to be counted earlier, never mind the fact that Trump’s lawsuits were being laughed out of one courtroom after another.

Meanwhile, Newt Gingrich floated the arrest of election workers. Mark Levin, the right-wing radio host, urged Republican-controlled legislatures to ignore the results of their state elections and send pro-Trump slates to the Electoral College. Right-wing propaganda outlets like The Federalist and One America News churned out deceptive content framing the election as inherently and obviously corrupt. The Republican National Committee hosted disgraced lawyer Sidney Powell for a sanctioned press conference that bordered on clinically insane, parts of which were tweeted by the @GOP account. The president’s lawyers and surrogates screamed about hacked voting machines and international treachery and Biden-logoed vans full of ballots. One conservative group paid a former police captain a quarter-million dollars to investigate voter fraud; he performed an armed hijacking of an air-conditioning repair truck, only to discover there were no fake ballots inside.

As the Electoral College meeting drew closer, hundreds of Republican members of Congress signed onto a publicity-stunt lawsuit aimed at invalidating tens of millions of votes for Biden. When it failed, the legislatures in several states closed public proceedings in response to actionable threats. (One such state, Michigan, had already dealt with armed radicals storming the statehouse earlier in the year, a sneak preview of Wednesday’s carnage in Washington.) The president’s former national security adviser, Michael Flynn, urged him to invoke martial law. The Texas Republican Party suggested seceding from the union. The Arizona Republican Party endorsed martyrdom. Eric Metaxas, the pseudo-evangelical leader with a devoted following on the right, followed suit. “I’d be happy to die in this fight,” he told the president during a radio interview. “This is a fight for everything. God is with us.”

Despite all of these arrows pointing toward disaster — and despite Trump encouraging his followers to descend on Washington come January 6, to agitate against certification of Biden’s victory — not a single Republican I’d spoken with in recent weeks sounded anxious. The notion of real troublemaking simply didn’t compute. Many of these Republicans have kept so blissfully ensconced in the MAGA embrace that they’ve chosen not to see its ugly side. Beyond that, it has long been canon on the right that leftists — and only leftists — cause mayhem and destruction. Democrats are the party of charred cities and Defund the Police; Republicans are the party of law and order and Back the Blue. As Republicans have reminded us a million times, the Tea Party never held a rally without picking up its trash and leaving the area cleaner than they found it.

And yet, the right has changed dramatically over the past decade. It has radicalized from the ground up, in substance and in style. It has grown noticeably militant. President Trump once told me, “The Tea Party still exists — except now it’s called Make America Great Again.” But that’s not quite accurate. The core of the Tea Party was senior citizens in lawn chairs waving miniature flags and handing out literature; the only people in costumes wore ruffled shirts and tri-corner hats. The core of the MAGA movement is edgier, more aggressive and less friendly; its adherents would rather cosplay the Sons of Anarchy than the Sons of Liberty.

There is one thing that connects these movements: Both were born out of deception. Republican leaders convinced the grassroots of 2009 and 2010 that they could freeze government spending and reform entitlement programs and repeal Obamacare. Trump convinced the grassroots of 2015 and 2016 that he, too, could repeal Obamacare, while also making Mexico pay for a border wall and overhauling the nation’s infrastructure. The key difference is that the Tea Party slowly faded into obscurity as voters realized these promises politicians made were a scam, whereas the MAGA movement has only grown more intensely committed with each new con dangled in front of them.

Make no mistake: Plenty of the people who stormed the U.S. Capitol complex on Wednesday really, truly believed that Trump had been cheated out of four more years; that Vice President Mike Pence had unilateral power to revise the election results; that their takeover of the building could change the course of history. I know this because I know several people who were there, and several more who planned to go. They bear responsibility for their actions, of course. But the point remains: They were conned into coming to D.C. in the first place, not just by Trump with his compulsive lying, but by the legions of Republicans who refused to counter those lies, believing it couldn’t hurt to humor the president and stoke the fires of his base.

On Tuesday afternoon, just 24 hours before the siege of the U.S. Capitol, a very smart and accomplished Republican caught me off guard. While talking by phone about another subject, he took a sudden detour. He told me there were whispers that I’d become infected with “Trump Derangement Syndrome.” He wanted to know, given my impassioned accounting of the president’s lies and recklessness since Election Day, if I could still cover the GOP objectively.

Maybe this president has made me deranged. Although judging by what I saw on Wednesday — not just the terrorist assault on Washington, but the decision made by more than 100 Republicans to vote with the purpose of placating those terrorists — it seems I’m not alone.