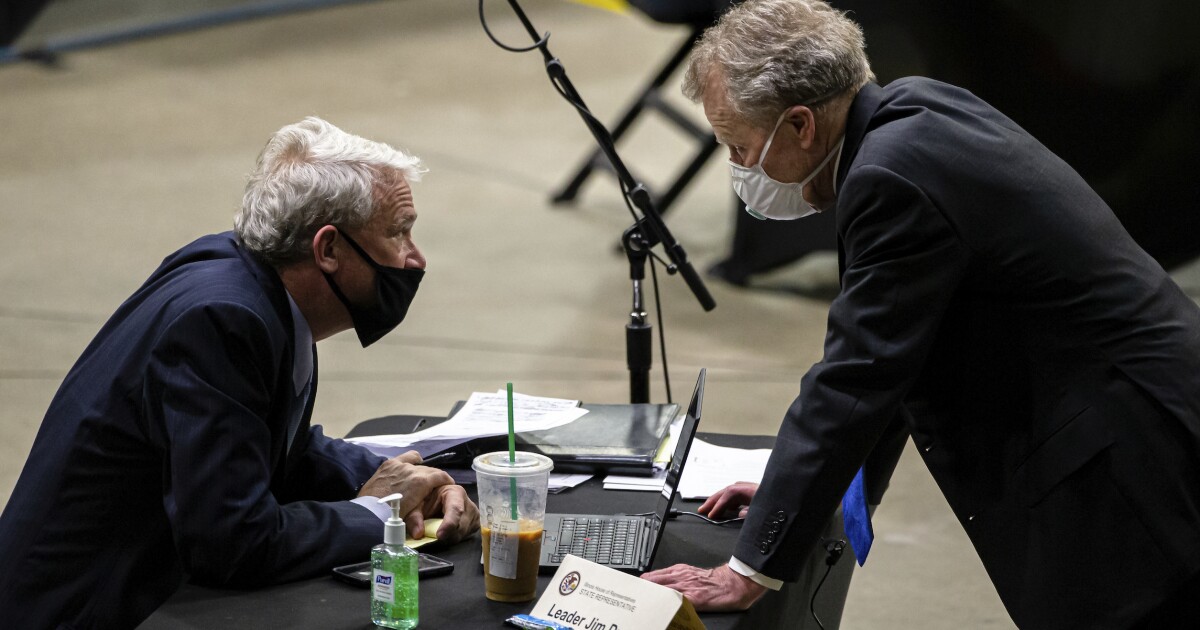 The new term of the Illinois Legislature begins Wednesday afternoon and all eyes are on who will be the next speaker of the House.

Longtime Illinois politics observer and University of Illinois Springfield professor Kent Redfield said whoever becomes speaker, they have to pledge to be independent of Michael Madigan, D-Chicago, who’s held the seat for all but two years since 1983.

“Whether [Madigan] finishes out his term or not, I don’t expect him to be the controller behind the curtain, I don’t think that’s going to happen,” Redfield said.

“To me, I consider Chris Welch an extension of Mike Madigan and we’ve got to break from the past,” Durkin said. “And trust me, Mike Madigan is going to do everything he can to pass the baton on to someone who’s going to continue the model of Madigan Inc.”

ComEd agreed to pay a $200 million fine after signing a deferred prosecution agreement with federal prosecutors last summer. In the agreement, ComEd admitted that officials with the company paid $1.3 million in jobs and contracts to Madigan associates in an effort to influence the speaker.

Welch and Durkin clashed through news conferences and letters over the House Special Investigating Committee that Welch chaired looking into the ComEd scandal. Republicans wanted to subpoena Madigan. Welch and Democrats on the committee blocked that and ended the committee’s work without hearing any testimony other than what ComEd volunteered.

Welch couldn’t be reached for comment, but he said early Wednesday that he thinks he has the 60 votes necessary to succeed Madigan, according to media reports.

Durkin said nothing has been done with his request to Illinois Secretary of State Jesse White to put a temporary parliamentarian in place Wednesday if balloting for speaker becomes protracted.

Redfield said there is a historical precedent for dozens of ballots if no candidate gets the majority votes needed to lead the chamber. That could take days.

Madigan has not withdrawn his nomination.

No matter who is speaker, Redfield said it’s going to be a tough two-year term.

The state’s budget is nearly $4 billion out of balance. A legislative commission on ethics and lobbying reforms has been stalled.

State Sen. Bill Cunningham, the assistant majority leader, said one issue the incoming legislature must focus on is helping businesses.

“One thing we really need to look at is assistance for the hospitality industry, for bars, restaurants, hotels,” said Cunningham, D-Chicago. “Those are the areas that have really been hurt the most and we need to find a way to help them. That needs to be right at the top of the list of things to do.”

But, Cunningham also advocated for closing what he called loopholes in the tax code. Republicans and business groups have opposed that move, saying it will mean a collective $500 million tax increase.

Republicans also said the priority needs to be on fixing problems like the state’s unemployment system.

In addition to serving as Speaker of the House, Madigan also serves as chairman of the Democratic Party of Illinois. The dual roles give Madigan control over the party's political funds and control over what legislation is allowed to move through the state's lower chamber.

Madigan's reputation has taken a series of hits over the past several years. The most recent and serious was his implication in a nearly decade-long bribery and patronage scandal involving ComEd.

Before the ComEd scandal, Madigan faced heavy criticism for what some women described as a hostile work environment in Springfield. In 2019, the Illinois Legislative Inspector General found two Madigan employees harassed other employees and should never be allowed to work for the state again.

In June 2018, Madigan’s longtime Chief of Staff and Clerk of the House Tim Mapes was fired after House employee Sherri Garrett publicly accused him of bullying and repeated harassment over several years.

Just a few months earlier, in February 2018, Kevin Quinn, a longtime political operative of Madigan’s, was accused by campaign staffer Alaina Hampton of sexual harassment. He was later fired from both his political and state government jobs.

During Madigan's tenure as speaker, Illinois' fiscal position has deteriorated to among the worst in the nation. Illinois has the worst credit rating in the U.S. at just one notch above junk bond status, and the state's five public pension systems are the worst funded in the nation. That's despite Illinois taxpayers paying among the highest combined state and local taxes in the country.