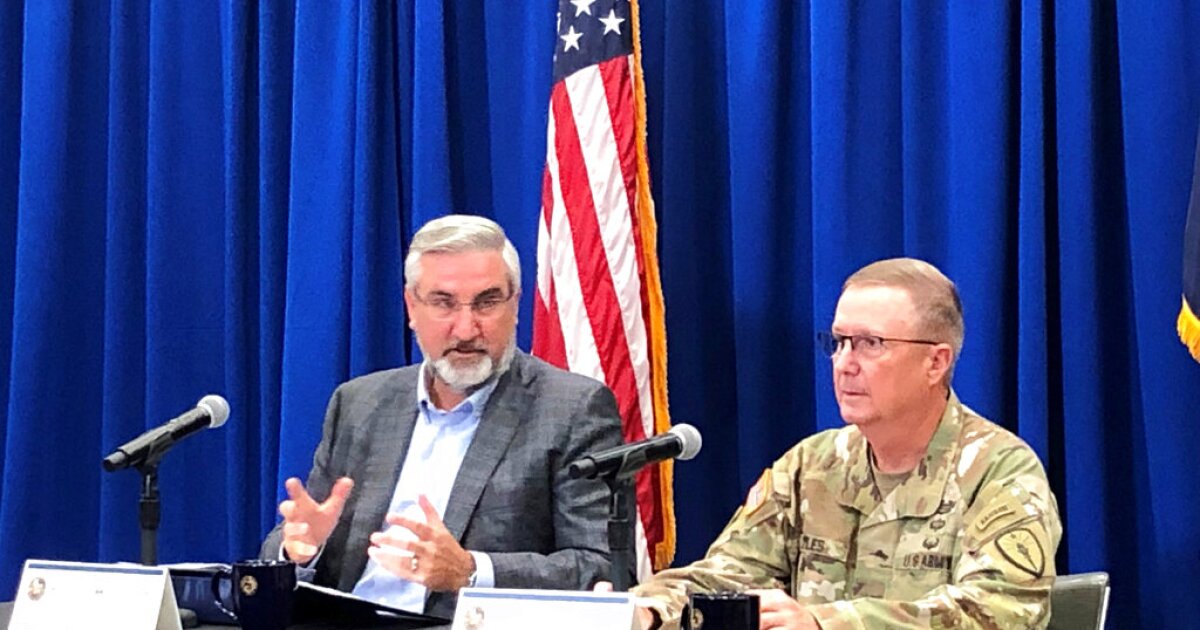 A spokesperson at Camp Atterbury said Wednesday the majority of Afghans housed at the camp presented identification and all were vetted before their arrival, contrary to claims made by an Indiana congresswoman.

“There’s been some confusion regarding the number of Afghan guests who arrived at Camp Atterbury with government-issued identification. We apologize for any confusion that may have arisen from those data sets that were given,” said Lorie Dankers, a public affairs officer with the Department of Homeland Security who is stationed at Camp Atterbury. “But here’s what I want people to know, is that the vast majority of arrivals presented some form of identification or documentation that demonstrated their identity.”

Dankers said most of the Afghans arriving at the camp had the equivalent of a passport or a driver’s license, and officials are usually looking for a photo ID.

“Of the people who came and arrived here, 76% of the guests presented some form of documentation or identification when they arrived,” she told The Center Square.

She said of the remaining people, many were children. Twenty-two percent of the Afghans at the camp, she said, are 9 years old or younger.

U.S. Rep. Victoria Spartz, R-Indiana, told Sean Spicer on Newsmax that only 25 of the 6,600 Afghans at the camp had actual identification documents.

Dankers said all Afghans at Camp Atterbury were vetted before coming to Indiana.

“They’re vetted by intelligence, law enforcement, counter-terrorism officials. They conducted that screening and security vetting before any Afghan guest was allowed into the United States,” she said. “They reviewed biographic information, biometric data, they were all vetted before they were even allowed to come to the United States.”

In testimony before the U.S. Senate Foreign Relations Committee on Sept. 14, Secretary of State Antony Blinken said most Afghans were not vetted before leaving Kabul and described a chaotic scene as Kabul fell to the Taliban.

“Who were you letting on the planes?” asked Sen. John Barrosso, R-Wyoming.

“Initially, they were people who managed to flood the airport,” Blinken responded. “We had to do an immediate assessment of those. We had to make sure we could clear people out of the airports so that the flights could come in, go out. But no one came to the United States without being checked somewhere else first to make sure they don't pose a security threat.”

He said the United States entered into agreements with more than a dozen countries where “transit points” were established to vet the Afghans being evacuated before they were brought to the United States.

The Indiana National Guard referred all requests for information about Camp Atterbury to Dankers and the Department of Homeland Security post at Camp Atterbury.

Camp Atterbury is an old Army base about 40 miles south of Indianapolis. It is operated by the Indiana National Guard, which uses it as a training facility and to test equipment. The garrison command consists of about 220 soldiers who work on the base year-round. To process and care for the Afghans, they are being assisted by about 800 soldiers from Fort Hood, who include military police, physicians and nurses. Members of the Army medical command at Fort Knox have also been on the base to assist with the medical screening process.

Afghans began arriving at the base the first week in September.

There are now about 6,600 Afghans residing there, said Dankers. She could not provide a specific number.

WIBC news talk show hosts Jason Hammer and Nigel Laskowski reported on their show on Tuesday that a National Guardsman they know who is stationed at Camp Atterbury contacted them and said 47 Afghans who had not completed the vetting process had left the base and their whereabouts were unknown. They also reported the guardsman said some were found to have ties to the Taliban and were taken away by authorities and that some Afghans had gotten into “shank fights.”

Dankers said the report that 47 Afghans had left before their screening was complete with no one having knowledge of their whereabouts is false.

But some Afghans have already left the base, she said.

“There are individuals who have departed Camp Atterbury because they’re eligible, maybe they are a U.S. citizen or a permanent resident, they have family or a place that we’ve provided them to stay and they’ve chosen to complete the resettlement process away from Camp Atterbury,” she said. “That’s fine. These people are not detained here.”

She could not say how many left.

“I don’t have the exact number. But there are individuals who’ve departed. I know that. They demonstrated that they were U.S. citizens or permanent residents. So they have legal status in this country,” Dankers said.

She said the report about some at the base having ties to the Taliban or another terrorist organization was false.

She said she did not know whether any of the Afghans processed at Camp Atterbury had been hired by Indiana companies.

“That I don’t know. Part of the resettlement process is to get work authorization,” she said.

Of the reports of fights among the Afghan evacuees, she said she has no information about this.

“A lot of that reporting is false and I think that those rumors, I just can’t verify them,” she said. “I’ve tried to follow up on them. I have no reports of that. You know, one of the things is we do have expectations of our guests, and behavior that is appropriate. They’ve been told what is expected of them, what the consequences are and we just continue to message that.”

Gov. Eric Holcomb’s office did not respond to requests for comment about Camp Atterbury.

Among the approximately 6,600 Afghans at the base, there are 180 pregnant women, Dankers said.

She said the camp is in need of warm clothes for men, women and children, and is asking Hoosiers to donate clothes through the network the governor has set up through the armories, saying this ensures “equitable distribution.”

The media has not been allowed into Camp Atterbury this month, and in response to a request to visit, Dankers said she has a list already of reporters wanting to visit and does not know when and if any visits will be allowed.