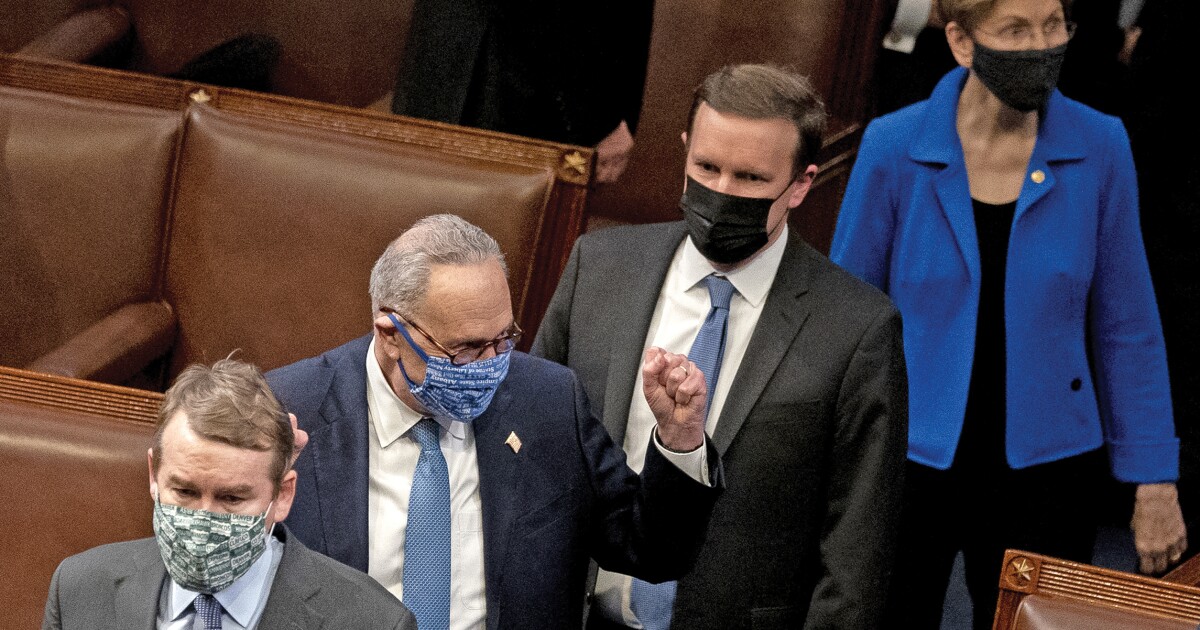 There's a new, powerful gang in the Senate.

Centrist Democrats, who make up a handful of lawmakers in the Senate, are the new doorkeepers to a sweeping Democratic agenda set to become law in the Biden administration.

Sens. Joe Manchin of West Virginia, Kyrsten Sinema and Mark Kelly of Arizona, Jon Tester of Montana, and Michael Bennet of Colorado will be under intense pressure to vote with fellow Democrats on key agenda items that can pass with 51 votes. They could get asked to provide the simple majority needed to rid the Senate of the 60-vote threshold required to pass most legislation.

The Senate is poised to flip to Democratic control after Democrats Raphael Warnock and Jon Ossoff were declared the winners in two Georgia Senate races, beating Republican Sens. Kelly Loeffler and David Perdue.

Democrats Wednesday declared victory and celebrated their move to the majority as of Jan. 20, when the Senate's 50-50 split gets tipped in their favor with the tiebreaking vote of Vice President-elect Kamala Harris.

“For too long, much-needed help has been stalled or diluted by a Republican-led Senate and President Trump,” Sen. Chuck Schumer, a New York Democrat who declared he would be the new majority leader, said on Wednesday. “That will change with a Democratic Senate, Democratic House, and a Democratic president.”

But a slim majority in the Senate will not provide Democrats with a clear path to passing some of their most ambitious wish-list items.

The Senate filibuster rule remains in place, providing a Republican minority with a powerful tool to block Democratic bills.

Democrats will likely try to work around the filibuster, either by using a special budget procedure known as reconciliation that lowers the voting total required for passage to 51 votes or by unilaterally ridding the Senate of the 60-vote threshold altogether.

In a press conference on Tuesday, Schumer would not say whether he plans to call up a vote to eliminate the legislative filibuster.

“We are united wanting big, bold change,” Schumer said. “And we are going to sit down as a caucus and discuss the best ways to get that done.”

That's where centrist Democrats will have the most leverage because they are the least likely to back a move to end the filibuster and are most likely to object to legislation favored by liberals, including “Medicare for All” or liberal climate change legislation resembling a “Green New Deal.”

Tester, who is up for reelection in 2022 and hails from red-state Montana, threw cold water on getting rid of the filibuster in a Wednesday morning interview with reporters in the Capitol.

Instead, he called on the Senate to work in a bipartisan way to fashion legislation and pass it.

“Bipartisan legislation tends to stand the test of time, and so hopefully, we continue to work together and have it be encouraged,” Tester said.

Now that the Senate is poised to be evenly split, with Harris as the tiebreaker, Tester said, “I still think it's going to require people working together to get things done.”

Manchin told the Washington Examiner recently that changing the filibuster rule so that only a simple majority is needed to pass legislation is not something he will support.

Sinema has signaled several times in recent interviews that she does not support ending the filibuster.

Bennet, who is also up for reelection in 2022, is in a precarious position.

While Colorado's electorate is increasingly turning Democratic, embracing a liberal agenda could jeopardize Bennet's reelection prospects. Bennet has already declared his opposition to ending the filibuster.

Kelly, who is in his first term, is another question mark. Kelly won a special election on Nov. 3 by a little more than 2%. Arizona, which had a long history of electing Republicans, has recently turned toward the Democrats. He's up for reelection in 2022 as well.

Kelly, in an interview with reporters in the Capitol on Wednesday, didn't say he'd be willing to get rid of the filibuster. Kelly has yet to indicate where he stands on the matter.

Instead, he emphasized the 50-50 split and the need for bipartisanship.

“What that means is we need folks working across the aisle,” Kelly said. “It's important to the future of our country that Democrats and Republicans can work together and solve problems, regardless of who is in charge.”

The Border as an Attractive Nuisance

Order National Guardsmen to Take up Positions in Hospitals as Controversial...

The Border as an Attractive Nuisance