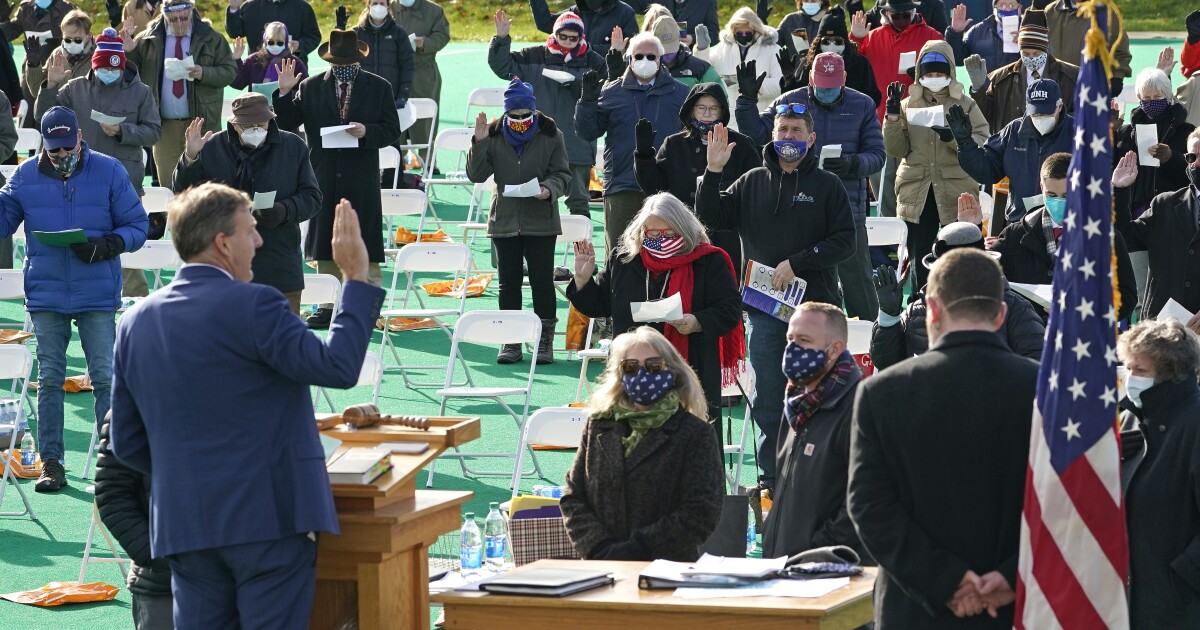 New Hampshire lawmakers braved cold weather and concerns about the coronavirus this week to pick new leaders and set rules for the upcoming session.

On Wednesday, newly elected members of the state Legislature met outdoors on the sprawling campus of New Hampshire University in Durham where they swore in lawmakers, filled leadership positions and elected a secretary of state and treasurer.

Known as Reorganization Day, the opening day legislative event is constitutionally required to be held on the first Wednesday in December in every even numbered year, come rain, shine – or, apparently, pandemic.

The biennial event is typically held indoors, but fears about the increasing spread of the coronavirus prompted legislators to move it outdoors.

Many Democrats decided to stay home after GOP leaders revealed earlier in the week that a number of members had tested positive for COVID-19 after attending a caucus meeting.

Regardless, those members of the 400-member House and 24-member Senate who attended met separately on the UNH campus before coming together in the joint session where Gov. Chris Sununu swore-in lawmakers. Those who weren't sworn in in person during Wednesday's ceremonies were given the option by Sununu to take the oath remotely.

Newly elected House Speaker Dick Hinch, R-Merrimack, was sworn into office and spoke about working together across the political aisle to deal with the impact of the coronavirus.

“We have some significant challenges ahead of us,” Hinch told fellow lawmakers in remarks. “We’ve spent the last nine months fighting to maintain our dignity and resolve in the midst of public health and economic uncertainty. Now is not the time to resort to petty political attacks and pointless spectacles. That is not what our voters sent us here to do.”

Hinch appointed state Rep. Jason Osborne, R-Auburn, as House Majority Leader. Osborne said Republicans will be getting to work “right away” on it's agenda “to produce and support a fiscally responsible, balanced state budget without new taxes or fees.”

“We are committed to improving our state’s business climate by reducing and reforming our business taxes, and continue to support policies that promote school choice and maintain funding for charter schools,” he said in remarks following his appointment.

In the Senate, Salem Republican Chuck Morse was elected president.

“In a time in the country when there were a lot of struggles, a lot of anxiety and disagreement, we’re getting through it,” he said in remarks. “And it’s going to be up to all of you to do your share as part of that and honor the great state that all our voters have honored by choosing you to represent them.”

State Treasurer Monica Mezzapell, a former deputy who took over the job following the resignation of former Treasurer Bill Dwyer, was elected to a full two-year term.

GOP lawmakers, who took over both the House and Senate in the recent elections, wasted no time rolling back rules enacted by Democratic legislative leaders in the previous session, including a ban on firearms in the Statehouse and required sexual-harassment training for incoming lawmakers.

The Statehouse in Concord has been closed since the outbreak began, and it remains unclear how the upcoming legislative session will proceed.