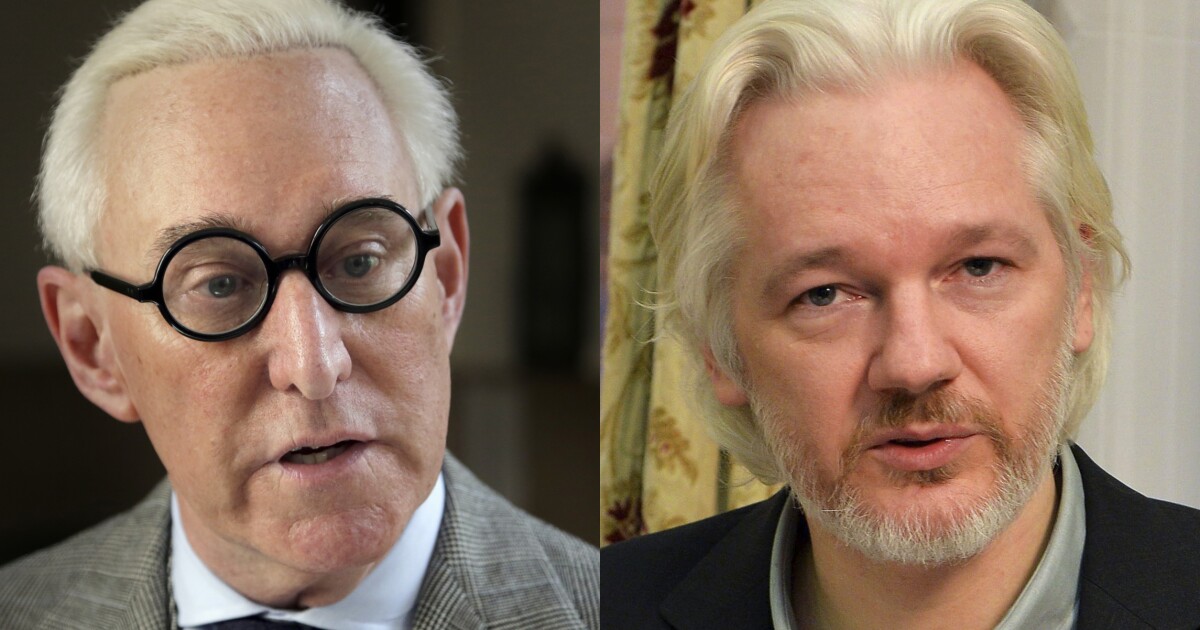 Previously redacted information from Robert Mueller’s Russia investigation report was made public on Monday, revealing why the special counsel’s team decided not to charge longtime Trump associate Roger Stone or WikiLeaks and its founder Julian Assange with crimes related to a computer hacking conspiracy or campaign finance violations.

The Justice Department released a new version of Mueller’s 448-page report one day before the Tuesday showdown between President Trump and former Vice President Joe Biden after Judge Reggie Walton of the U.S. District Court for the District of Columbia, an appointee of former President George W. Bush who has reviewed an unredacted version of Mueller’s report, issued a lengthy opinion in October. ruling that most of the redactions were adequately justified but that some were not, including redactions on sections about the thought process behind the criminal charging decisions in connection to what Mueller's team deemed was the Russian military intelligence hack of email systems belonging to former Secretary of State Hillary’s Clinton’s campaign, Clinton campaign chairman John Podesta, and the Democratic National Committee in 2016.

The ruling was part of a Freedom of Information Act lawsuit brought by Buzzfeed and the Electronic Privacy Information Center. The newly unredacted passages span roughly seven previously blacked out pages of Mueller’s report.

“Given WikiLeaks’s role in disseminating the hacked materials, and the existence of some evidence that Stone played a role in coordinating the October 7 release of the Podesta materials, this Office considered whether to charge WikiLeaks, Assange, or Stone as conspirators in the computer-intrusion conspiracy under Sections 1030 and 371. The theory of prosecution would be that these actors were liable as late joiners in an already existing conspiracy at any time, and can properly be convicted though he was not in the conspiracy at its inception,” the newly disclosed section of Mueller’s report said. “In particular, although it did not participate in the hacking itself, WikiLeaks would be liable for ensuring a market for and maximizing the value of the stolen materials … Stone might similarly be liable under these cases if he too was integral to the computer intrusion conspiracy’s success by ensuring that the stolen materials had their maximum impact upon dissemination.”

But Mueller’s office “determined, however, that it did not have admissible evidence that was probably sufficient to obtain and sustain a Section 1030 conspiracy conviction of WikiLeaks, Assange, or Stone” because “the foregoing theory of conspiracy liability depends on proof of an agreement … whether express or tacit” and “would also require evidence of knowledge on the part of the putative conspirator that the criminal objective of the conspiracy has not yet been completed.”

The report said that “with respect to WikiLeaks and Assange, this Office determined the admissible evidence to be insufficient on both the agreement and knowledge prongs.” Specifically, “as to agreement, many of the communications between the GRU officers and WikiLeaks-affiliated actors occurred via encrypted chats” and “although a conspiracy is often inferred from the circumstances … the lack of visibility into the contents of these communications would hinder the Office’s ability to prove that WikiLeaks was aware of and intended to join the criminal venture comprised of the GRU hackers.” The report added that “while the investigation developed evidence that the GRU’s hacking efforts in fact were continuing at least at the time of the July 2016 WikiLeaks dissemination …the Office did not develop sufficient admissible evidence that WikiLeaks knew of — or even was willfully blind to — that fact.”

The newly unredacted section immediately followed the report’s discussion of the role played by WikiLeaks in the dissemination of thousands of stolen emails during the 2016 presidential election and a summary of Stone’s alleged request that conspiracy theorist Jerome Corsi reach out to Assange on Oct. 7, 2016, the day the Access Hollywood tape of Trump was made public. Mueller’s report previously noted that “the investigation did not establish that Corsi actually took those steps” although WikiLeaks released the first batch of Podesta's emails later on that afternoon, within an hour of the publication of the Washington Post’s story.

“The Office determined that it could not pursue a Section 1030 conspiracy charge against Stone for some of the same legal reasons. The most fundamental hurdles, though, are factual ones,” Mueller’s report said with redactions lifted, adding, “Neither Corsi’s testimony nor other evidence currently available to the Office is sufficient to prove beyond a reasonable doubt that Stone knew or believed that the computer intrusions were ongoing at the time he ostensibly encouraged or coordinated the publication of the Podesta emails. Stone’s actions would thus be consistent with (among other things) a belief that he was aiding in the dissemination of the fruits of an already completed hacking operation perpetrated by a third party, which would be a level of knowledge insufficient to establish conspiracy liability.”

Stone was swept up in Mueller’s investigation and had been convicted of lying to congressional investigators about his alleged attempted outreach to WikiLeaks, obstructing a congressional investigation, and attempting to intimidate a possible congressional witness. Stone was sentenced by Judge Amy Berman Jackson to 40 months for obstruction of justice and 12 months for the other five counts to be served concurrently earlier this year following the GOP operative’s jury conviction in November 2019 in what Attorney General William Barr described as a “righteous prosecution.” Trump commuted Stone’s sentence in July.

The Justice Department first charged Assange in April 2019 with a single count of conspiring with former Army intelligence analyst Chelsea Manning to crack a Pentagon password, then charged him in May 2019 with 17 additional accounts including under the Espionage Act, then charged him under an even broader superseding indictment this June, all separate from Russian meddling in 2016. The U.S. is currently working to extradite Assange from the United Kingdom.

“The Office also considered whether WikiLeaks and anyone connected to the Trump Campaign had liability in connection with WikiLeaks’s months-long releases of stolen emails and other documents, possibly with the aim of influencing the 2016 presidential election … The Office explored whether WikiLeaks’s actions could constitute a prohibited expenditure,” a newly public passage from Mueller’s report stated, adding, “The Office concluded that substantial questions exist about whether the release of emails could be treated as an expenditure, whether the government could establish willfulness, and whether prosecution of this conduct would be subject to a First Amendment defense. In combination, those factors created sufficient doubt that the Office could obtain and sustain a conviction based on WikiLeaks’s conduct. There is also insufficient evidence at the present time to establish beyond a reasonable doubt that Roger Stone or any other persons associated with the Campaign coordinated with WikiLeaks on the release of the emails, which alone would preclude prosecution of them for the WikiLeaks-related conduct even if WikiLeaks had violated campaign finance law.”

Mueller’s report said the Russians interfered in 2016 in a “sweeping and systematic fashion” but it “did not establish that members of the Trump campaign conspired or coordinated with the Russian government.” The special counsel also laid out 10 possible instances of President Trump obstructing justice but did not reach a conclusion. Barr and then-Deputy Attorney General Rod Rosenstein concluded that Trump had not obstructed justice. Barr appointed U.S. Attorney John Durham to conduct an inquiry into the origins and conduct of the Mueller investigation.

The Supreme Court agreed to take up in December the battle between the House Judiciary Committee and the Justice Department in which Democrats are seeking access to more redacted portions of Mueller's report and underlying grand jury materials from the special counsel investigation.