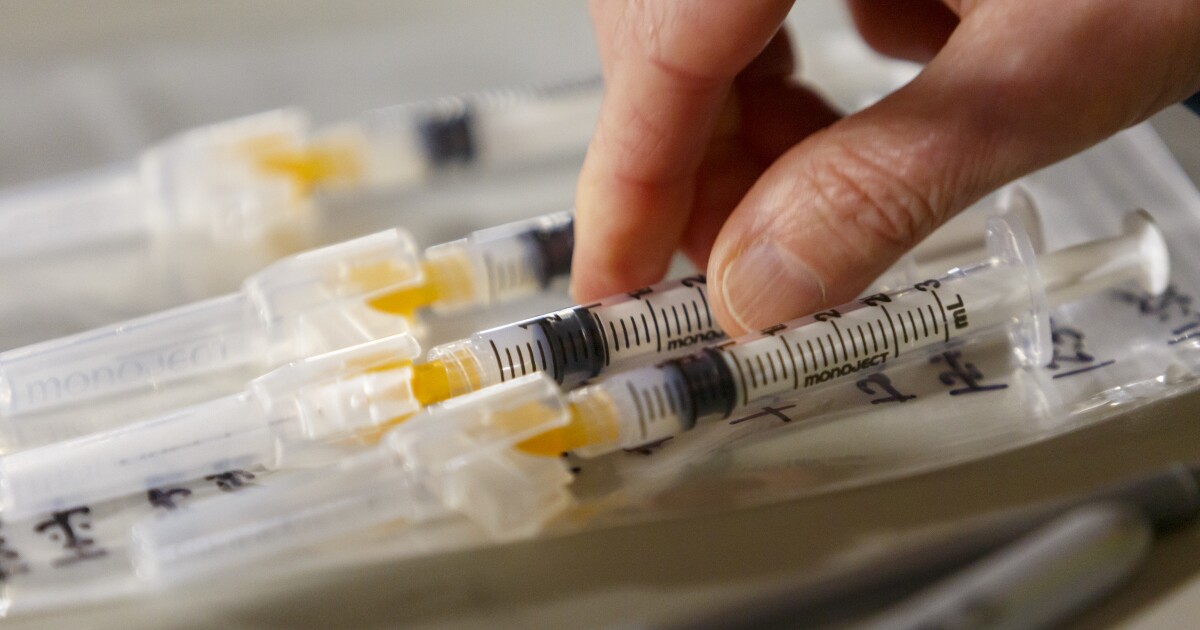 A week into the new year, Oregon is renewing its efforts to use up thousands of unused COVID-19 vaccines after weeks of slowdowns, Gov. Kate Brown announced Friday.

Just days before Christmas, state officials set the goal of vaccinating as many as 100,000 Oregonians with their first dose before New Year's Day.

As of Friday, the Oregon Health Authority (OHA) reported that 74,914 doses have been administered to date or about 29% of the 252,350 doses the state has received. A total of 51,283 people have been vaccinated with 326 receiving their first dose.

In that time, governors around the country including Brown have pointed fingers at federal authorities for shortchanging the state's promised vaccine share.

Like many states, Oregon has opted to distribute vaccines in phases to priority groups starting with health care workers, those working and living in long-term care facilities, first responders, and tribal health programs.

OHA officials estimate this phase alone includes up to 400,000 people or less than 1% of Oregon's population of 4.2 million.

On Thursday, the Oregon State Fair and Exposition Center in Salem became one of half a dozen sites around the state dedicated to distributing doses of the Pfizer and Moderna COVID-19 vaccines.

Brown announced on Friday that the National Guard will be deployed to the site to begin assisting in the vaccine rollout starting Tuesday.

According to Josh Free, chief pharmacy officer at Salem Health, the facility is set up to distribute as many as 250 doses per hour on Thursday pending support from the National Guard.

By 6 p.m. on Thursday, the clinic saw such long lines around the building, health workers had to close its doors for the day after reaching capacity.

Free said the clinic does not anticipate any problems keeping vaccines cool after receiving a cold storage unit on loan from Willamette University and they have another one ordered.

“We carefully monitor how much vaccine we're pulling in to the clinic,” Free said. “And so the the stability of it and the shelf life when it stays in the freezer or in a refrigerator is long enough that that we're not concerned. The main thing is once you've actually started a vial of vaccine, we have to administer that full vial within a short period of time.”

The CDC reports there is no maximum interval between first and second doses. It does not recommend mixing the two vaccines. Common side effects include soreness, fever, headaches, and joint pain.

The Pfizer and Moderna vaccines require two doses and are thought to provide about 95% protection. The first must be taken three weeks apart and the second four weeks apart. They are approved for older teens and adults.

Among those eager to get their first shots on Thursday was Taylor, a nurse from Woodburn.

For Ralph Yates, chief medical officer at Salem Health, the clinic is a lifeline he calls “Hope Central.”

“The folks that we've had come through here, it feels a little bit like Disneyland,” Yates said. “They're excited. Hope is not on the horizon. It's here.”

The state has not named which groups will be eligible for vaccination in Phase 2 despite Brown's stated desire to put elementary teachers at the front of the line.

Members of the OHA's Vaccine Advisory Council plan on meeting next week to discuss the matter further. The OHA website says vaccines for the general public may not be available until spring.

Less than 4% of Oregon's 587,000 K-12 students are being taught in-person in January, according to Oregon Department of Education data.

Many parents and teachers are divided over how soon to reopen classrooms, but few see Brown's suggested date of February 15 as realistic.

In a joint letter released on Thursday, the presidents of five Oregon teachers unions in Western Oregon said the governor's timeline was too soon for comfort.

“We are unwilling to recklessly reopen schools after working so hard to minimize the impact of the pandemic in our state,” the letter states. “We want desperately to be back in physical classrooms with our students—as soon as we can do so safely, without needlessly risking the lives and health of students, educators or members of our community.”

Should classrooms reopen in the near future, the authors added, districts would require access to rapid COVID-19 testing, onsite cleaning crews, and time to set up comprehensive safety protocol.

The state legislature passed legal liability protections for all school districts who follow COVID-19 health protocols during a special session on December 21.

Few Oregon school districts have made firm commitments to reopen classrooms in the coming weeks since Brown made in-person instruction a local decision.

OHA Director Patrick Allen has said the state may not achieve herd immunity to the disease at current rates of vaccination until fall at the very earliest.

A new model released by the OHA showed person-to-person transmission rates for COVID-19 surged from 0.8 in late November to 1.29 by December 23.

The agency reports the state's projected daily case rate may be as high as 1,780 between January 13 and January 26 with 85 daily hospitalizations per day from the virus if transmissions hold steady at December 23 levels.

Should transmission levels remain at November levels, the model predicts daily case rates would dip to 1,400. The state's current daily case rate is 1,161.