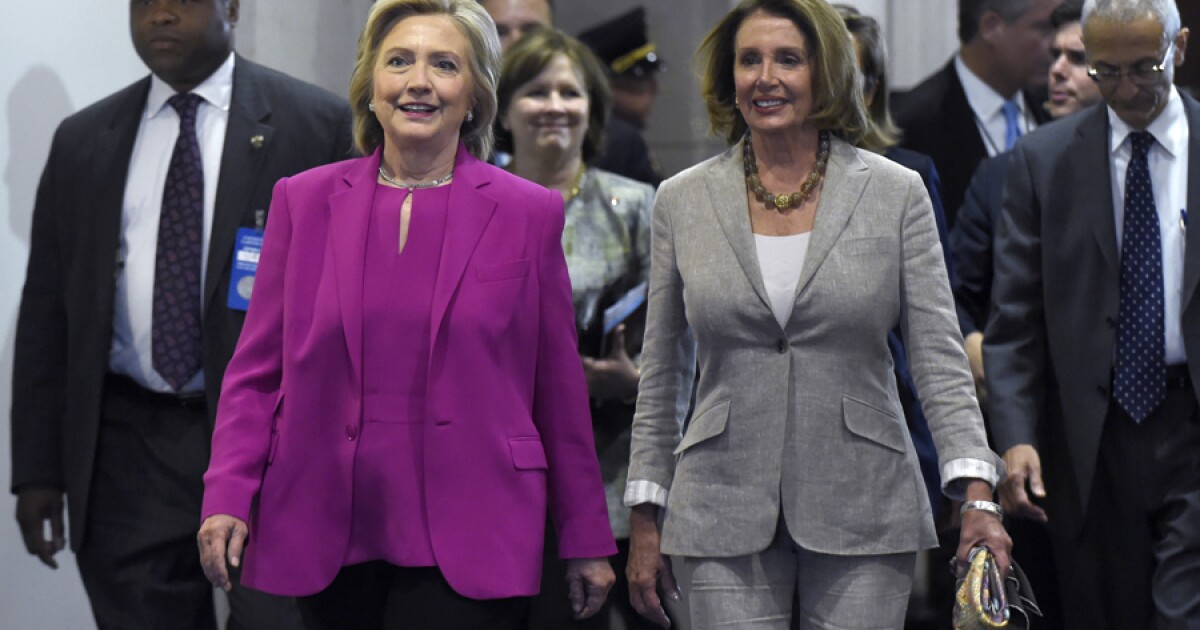 Pelosi made an appearance on Clinton’s podcast, You and Me Both, released over the weekend, after which Clinton tweeted on Monday afternoon: “Speaker Pelosi and I agree: Congress needs to establish an investigative body like the 9/11 Commission to determine Trump's ties to Putin so we can repair the damage to our national security and prevent a puppet from occupying the presidency ever again.”

The Washington Examiner reached out to Pelosi's office seeking confirmation of whether Clinton's claim was true, as it was unclear in the interview whether Pelosi was agreeing to such a bipartisan commission to look into the Russia issue or the Jan. 6 riot at the Capitol.

Drew Hammill, Pelosi's spokesman, said it was the latter. “The commission the speaker is talking about relates to the attack on the Capitol. That is clear from her answers,” he said. He also directed the Washington Examiner to the podcast transcript. He did not respond to a follow-up question on whether Pelosi believed Clinton mischaracterized her.

The idea of a 9/11 Commission-style panel was brought up as Clinton and Pelosi were discussing the storming of the U.S. Capitol. Clinton steered the conversation to Russia.

“We learned a lot about our system of government over the last four years with a president who disdains democracy and, as you have said numerous times, has other agendas. What they all are, I don’t think we yet know. I hope, historically, we will find out who he’s beholden to, who pulls his strings. I would love to see his phone records to see whether he was talking to Putin the day that the insurgents invaded our Capitol,” Clinton said. “But we now know that not just him but his enablers, his accomplices, his cult members have the same disregard for democracy. Do you think we need a 9/11-type commission to investigate and report everything that they can pull together and explain what happened?”

Pelosi replied: “I do. Let me again, to your point of who is he beholden to, as I have said over and over, as I said to him in that picture with my blue suit as I was leaving, what I was saying to him as I was pointing rudely at him, ‘With you, Mr. President, all roads lead to Putin.’ I don’t know what Putin has on him politically, financially, or personally, but what happened last night was a gift to Putin because Putin wants to undermine democracy in our country and throughout the world.”

“And these people, unbeknownst to them, maybe, are Putin puppets,” the California Democrat said.

“They were doing Putin’s business when they did that at the incitement of an insurrection by the president of the United States,” she added in a nod to the latest round of impeachment. “So, yes, we should have a 9/11 commission, and there is strong support in the Congress to do that.”

The Democratic leader first mentioned such an investigative body during a press conference on Friday, not in the context of Trump-Russia claims but rather to look specifically at how the Capitol siege happened. “There is strong interest in the Congress in a 9/11-type commission, an outside commission to conduct that after-action review,” she said.

Trump is poised to leave office on Wednesday, and Democrats, who are taking control of both chambers of Congress, are already talking about their plans to investigate him post-presidency. But the Trump-Russia matter has been exhaustively investigated over the years, including in Congress.

Clinton has advocated Trump-Russia theories. For instance, the former secretary of state tweeted on Halloween 2016 that “computer scientists have apparently uncovered a covert server linking the Trump Organization to a Russian-based bank.” She shared a statement from her campaign foreign policy adviser, Jake Sullivan, now Biden’s pick for national security adviser, who said that “the secret hotline may be the key to unlocking the mystery of Trump’s ties to Russia.”

The claim that a Russian Alfa Bank server was secretly communicating with a server at Trump Tower was advocated by British ex-spy Christopher Steele and the Clinton campaign in 2016. Later, Justice Department Inspector General Michael Horowitz said in a 2019 report that the FBI “concluded by early February 2017 that there were no such links.” A Senate Intelligence Committee report did not find “covert communications between Alfa Bank and Trump Organization personnel.”

U.S. Attorney John Durham, who was appointed special counsel in October, is investigating the origins and conduct of the Trump-Russia investigation.