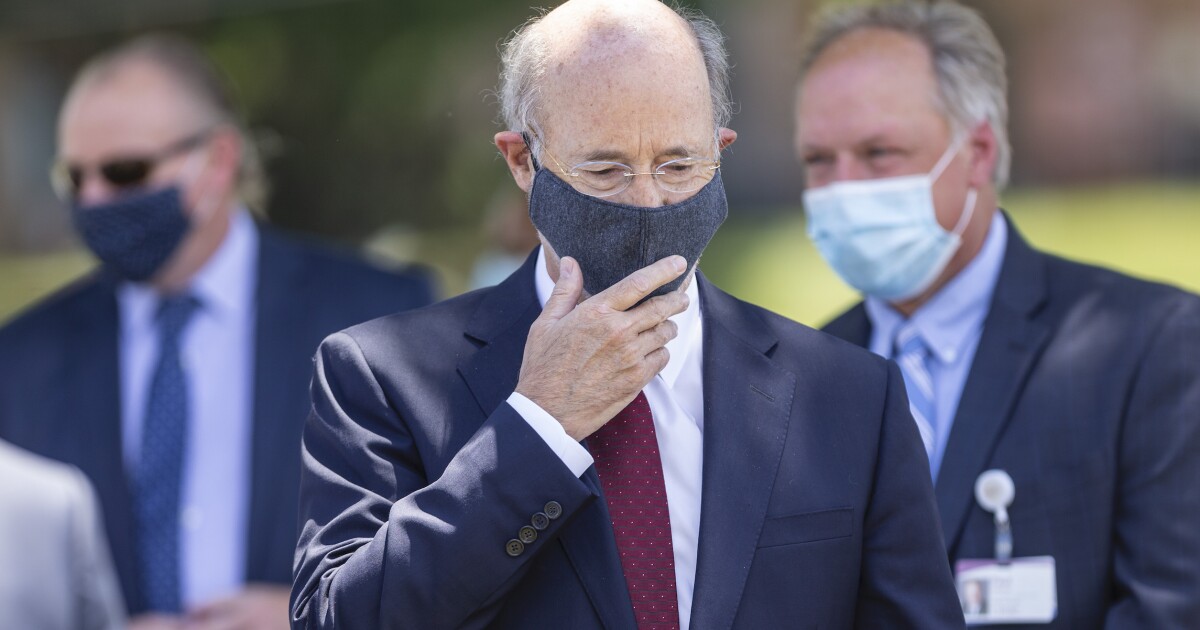 With widespread vaccination still at least a few weeks away, Pennsylvania officials said Thursday the state will implement new restrictions for three weeks to slow the spread of COVID-19 as caseloads threaten to overwhelm hospital intensive care units.

“For the next three weeks, please … stand with me, unite against COVID,” Gov. Tom Wolf said during a virtual news conference. “We will be saving lives, but we have to do it together.”

Wolf, who tested positive for the virus on Tuesday, said beginning Saturday indoor dining at restaurants will be banned, extracurricular activities at schools will be canceled and indoor and outdoor gatherings will be limited to 10 people and 50 people, respectively. Gyms and entertainment venues, including museums, movie theaters and casinos must close as well.

Wolf also urged residents to wear masks, social distance and follow the stay at home advisory. The restrictions will last through Jan. 4, 2021.

“What we need to do is get through this period right now,” he said. “Again, it's the virus that’s dictating this.”

The new mitigation efforts confirm rumors that swirled around the Capitol all week concerning a return to lockdown measures enacted at the onset of the pandemic last spring. While the administration’s most recent guidance does not mandate the same widespread business closures, it could deliver a deadly blow to many restaurants and bars struggling to keep their doors open.

Chuck Moran, executive director of the Pennsylvania Licensed Beverage and Tavern Association, said the “frustrating” order will also do little to reduce the spread of the virus and urged Wolf to call a special session to “address the crisis within the crisis.”

“Statistically, these actions directed at taverns and restaurants likely cannot play any significant role in helping the Governor reduce the COVID crisis that continues,” he said. “Particularly while other retail establishments are not limited nearly as much and while PLCB liquor and beer sales continue to set records as house parties and holiday gatherings increase.”

Secretary of Health Dr. Rachel Levine said evidence collected from across the country going back six months shows that indoor dining does indeed increase transmission of the virus.

“This is not new information,” she said. “It’s worse now because it's harder to eat outdoors. … When you’re indoors, a respiratory virus like this spreads easier.”

Statewide, COVID-19 cases increased from 200,000 to more than 450,000 in just six weeks. Hospitalizations are creeping nearer to 6,000, doubling the rate seen during the pandemic’s first wave in March and April. Health officials said Thursday this resurgence is far worse.

“The situation is dire,” Wolf said. “It’s worse than it was in the spring [when] we had to flatten the curve.”

Wolf insisted the temporary measures would help hospitals keep up until the first vaccinations become available. Levine said the Pfizer vaccine could be given to Pennsylvania health care workers as soon as next week, with the Moderna vaccine coming the following week.

Gordon Denlinger, Pennsylvania director for the National Federation of Independent Business, said the new round of restrictions “will result in another wave of business failures and the loss of all the jobs that go with it.”

“Governor Wolf expresses verbal concern over the harms to small business, but his actions indicate a total lack of understanding of what is really happening,” he said.

“Today’s order will be the death knell for so many struggling shops and stores,” Denlinger said. “Unfortunately, Governor Wolf’s order was not coupled with any plan, to support the hundreds of business owners, their employees, and families his measures will impact.”