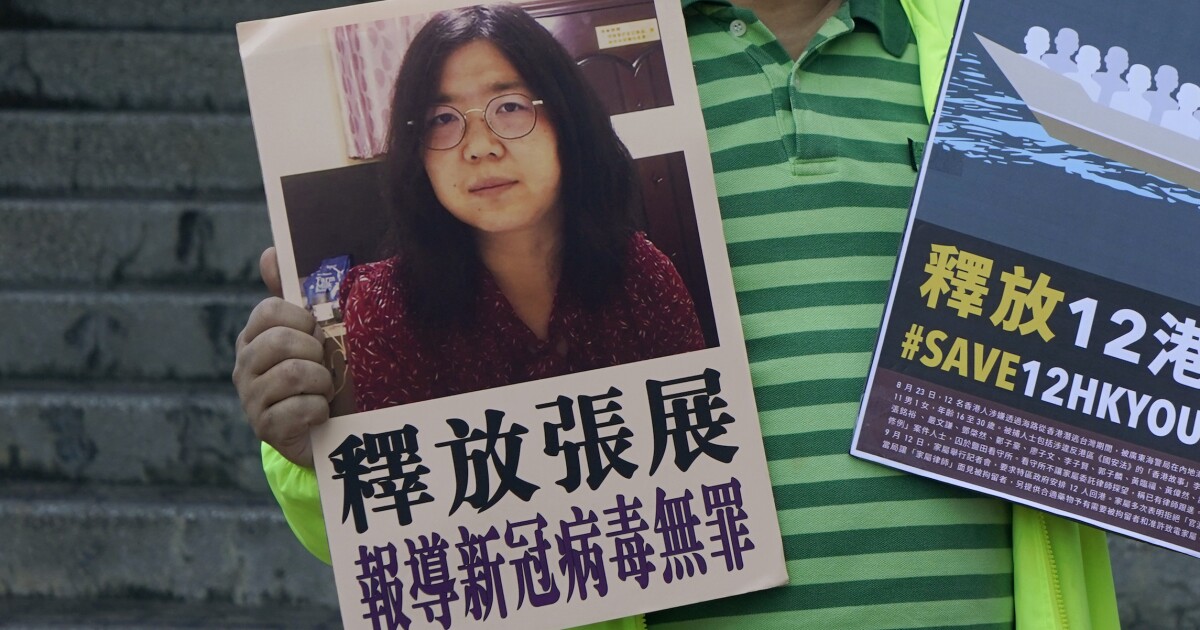 Secretary of State Mike Pompeo demanded Chinese Communist Party release Chinese citizen journalist Zhang Zhan, who was sentenced to four years in prison this week for her reporting on the ground in Wuhan amid the coronavirus outbreak in early 2020.

“The United States strongly condemns the People’s Republic of China’s sham prosecution and conviction of citizen journalist Zhang Zhao on December 28. We call on the PRC government to release her immediately and unconditionally. The Chinese Communist Party has shown once again it will do whatever it takes to silence those who question the Party’s official line, even regarding crucial public health information,” Pompeo said, adding that “because of the CCP’s gross malfeasance, the rest of the world relied heavily on uncensored reports from citizen journalists like Zhang to understand the true situation in Wuhan after the CCP-imposed strict media controls were enforced and a controllable outbreak turned into a deadly global pandemic.”

There is significant evidence that China covered up the coronavirus's spread, muzzled whistleblowers, intimidated doctors, misled the World Health Organization, and blocked outside health experts from investigating. China knew by late 2019 that human-to-human transmission was occurring, but on Jan. 14, the WHO tweeted, “Chinese authorities have found no clear evidence of human-to-human transmission.”

Zhang, 37, refused to plead guilty and was convicted of “picking quarrels and provoking trouble” in a Chinese court on Monday, according to her attorney, Zhang Keke. The journalist was wheelchair-bound at the sentencing hearing because she has become frail and weak while in the custody of Chinese authorities, according to her lawyer.

The Chinese journalist is a former lawyer who traveled from coastal Shanghai to the central Chinese city of Wuhan, where the virus is thought to have originated, in early February. She spent months documenting the frenzied response to the pandemic, reporting on the city’s strict lockdown, and offering critiques about the government response. She said the government “didn’t give people enough information, then simply locked down the city.”

Zhang was detained in May and returned to Shanghai. While in custody, she began a hunger strike that reportedly resulted in her being physically restrained and forced to use a feeding tube.

Her indictment said she was guilty of trying to “maliciously stir up the Wuhan COVID-19 epidemic situation.” Her lawyer says no evidence was presented to back up that claim.

Leo Lan, a research and advocacy consultant with the non-profit Chinese Human Rights Defenders, said government officials “want to use her case as an example to scare off other dissidents from raising questions about the pandemic situation in Wuhan earlier this year.”

As the WHO publicly praised China’s response, internal recordings show WHO leaders privately complained about China’s opacity. During the summer, the WHO quietly backtracked on its assertion that the Chinese government had alerted the United Nations agency about the coronavirus outbreak.

As early as April, the U.S. Intelligence Community was reported to believe the Chinese Communist Party downplayed the outbreak and that China continued to mislead the world.

Zhang used social media to put a spotlight on “the detentions of other independent reporters and harassment of families of victims seeking accountability from the epicenter,” according to Chinese Human Rights Defenders.

Republican TEXAS Sen. Ted Cruz responded to the news of Zhang’s imprisonment by tweeting, “Horrible. This is exactly why I introduced legislation to sanction Chinese officials involved in the ongoing suppression of medical experts, journalists, and political dissidents who have tried to tell the truth to the world about the #CoronavirusOutbreak.”

GOP Rep. Michael McCaul, ranking member on House Foreign Affairs, similarly condemned China’s actions, saying that “while they lie to the world and their own people about their culpability in an attempt to cover-up their guilt, the truth is on display with the jailing of citizen journalist Zhang Zhan.”

A September report from McCaul’s China Task Force contended the Chinese Communist Party’s alleged coronavirus cover-up and the WHO’s actions allowed the coronavirus outbreak to grow into a lengthy and deadly pandemic.

“It is beyond doubt that the CCP actively engaged in a cover-up designed to obfuscate data, hide relevant public health information, and suppress doctors and journalists who attempted to warn the world,” the GOP report said, adding, “By responding in a transparent and responsible manner, the CCP could have supported the global public health response and shared information with the world about how to handle the virus. It is likely the ongoing pandemic could have been prevented had they done so.”

As Zhang was reporting from Wuhan, the virus exploded in scale and has since infected nearly 81 million and has been attributed to the deaths of more than 1.7 million people around the world, according to the Johns Hopkins University tracker, including more than 335,000 deaths in the United States.

A recent study by the Chinese Center for Disease Control and Prevention, first reported by CNN, suggested the COVID-19 infection rate in the city may have been at least 10 times higher than the government admits, with coronavirus antibodies present in 4.43% of Wuhan residents in a 34,000 person sample from the city, suggesting at least 487,300 people in the 11 million person city may have been infected, even though the Wuhan Municipal Health Commission insists there were only roughly 50,000 infections there.

“Lying is a feature, not a bug, of authoritarian regimes. The CCP restricted and manipulated information about the COVID-19 outbreak in Wuhan from the start and brutally silenced other brave truth-tellers, such as Dr. Li Wenliang, Chen Qiushi, and Fang Bin,” Pompeo said Tuesday.