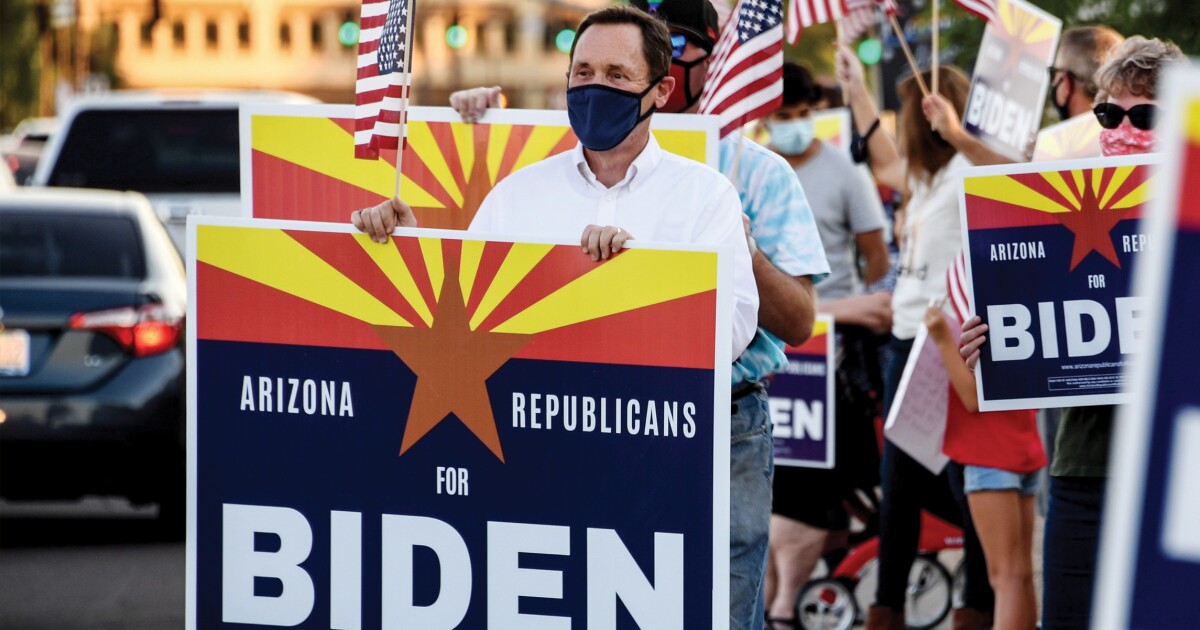 For decades, Arizona was the reddest of red states. From the crimson cliffs of Sedona to its fiery desert sunsets, this rugged terrain bred Barry Goldwater, the conservative’s conservative.

Those sunsets are looking a lot more purple these days.

In November, the Grand Canyon State narrowly chose Joe Biden, the first time a Democratic presidential candidate had won Arizona since 1996. By a slightly larger margin, Arizona voters sent Mark Kelly to the U.S. Senate to join fellow Democrat Kyrsten Sinema. The last time Arizona had a Democratic senator before Sinema was 1995. The state hasn’t had two blue senators since 1953.

Facing this electoral bloodletting, the Arizona Republican Party leaped into action. Members headed to a Phoenix megachurch and censured a former GOP senator, another former GOP senator’s wife, and Arizona’s current GOP governor. Then, they reelected Kelli Ward, the chairwoman who led Arizona Republicans into their worst disaster in living memory. Thelma told Louise to keep going, and into the Grand Canyon they drove.

Outsiders around the country wonder how the Arizona GOP has fallen so hard and how much farther it has yet to go. It hasn’t reached bottom but is closing in fast. What isn’t as commonly known is that the state organization has been at war with itself for decades. It began around 2000 with the McCain machine against a grassroots insurgency.

John McCain won the seat previously held by Sen. Goldwater himself, despite the former Navy pilot and POW having no ties to the state. After working on Capitol Hill, McCain married a Phoenix heiress, moved to Arizona, and spent two terms in the House of Representatives, positioning himself to win the Senate seat in a landslide.

By the late ‘90s, McCain had built a powerful network of business leaders, wealthy donors, and political loyalists. His equally powerful media savvy and constituent services turned him into a kingmaker.

Earlier that decade, Joe Arpaio took over the Maricopa County Sheriff’s Office after years of poor management. He successfully transformed the moribund department through a “tough on crime” message and community involvement. But his own brand of media savvy devolved into violent stunts, cruel treatment, and rampant corruption.

Over-the-top press gushing over McCain and attacking Arpaio slowly divided the local party into an elite establishment vs. working-class activists. It came to a head during 2001 when a petition to recall McCain was gathering steam. It took the events of 9/11 to stop it.

Over that decade, the rift grew deeper. Many blamed McCain’s moderation for his 2008 presidential campaign loss to Barack Obama, especially after his campaign advisers blamed that loss on grassroots favorite Sarah Palin.

One of the first Tea Party gatherings in the nation protested a 2009 visit by President Obama to a high school in Mesa, Arizona. It began as a libertarian-leaning movement opposing both parties following the Wall Street bailouts and subsequent stimulus legislation. Before long, the Tea Party was singularly opposed to Obama, with many gatherings featuring Sheriff Arpaio’s rabble-rousing speeches. Arizona Gov. Jan Brewer, a longtime Republican centrist, reluctantly signed SB 1070 to stem illegal immigration to the state.

The outraged national media reaction hardened conservatives against any efforts to reform immigration, an issue strongly linked to McCain. Fending off a primary challenge, the senator demanded completion of the “danged fence” on the border, a position he dropped the instant he returned to the Beltway.

McCain’s long history of playing Barry Goldwater in Arizona and voting moderate “maverick” in Washington kept nearly catching up with him. But his political machine obliterated Tea Party candidates through harsh ads, whisper campaigns, and shutting off contributions.

If you supported his primary opponent, your political career was over. Your business contacts might dry up as well. Some contenders fled the state after being thrashed by the merciless McCain machine. The establishment controlled the party apparatus, but its iron-fist tactics further radicalized the insurgents.

Arizona has never actually been a red state, at least not as that term is commonly understood. Going back to the 1970s, the state has had as many Democratic governors as Republican. The ideology is neither conservative nor liberal. It’s contrarian.

My late father, who raised me as a good Arizona boy, provides a textbook example. His politics were somewhere between Archie Bunker and Ron Swanson, but he would often vote to reelect Democrats. His reason? “I never hear about them in the news, which means they aren’t bothering me or screwing anything up.” Every ballot includes a raft of propositions. He voted “no” on every one because “if we choose ‘yes,’ that means change, and change is bad.”

Decades later, Congress wanted to mandate nationwide daylight saving time to save energy and eliminate confusion. D.C. wants to force another work hour of sunshine on Phoenix — in the summer? Angry Arizonans said, ‘Hell, no,' uniformity be damned.

Skip to 1990, when Arizona was the first state to hold a popular vote to create a Martin Luther King Jr. holiday. The week before the vote, the measure was leading in the polls 60% to 40%. But that weekend, the NFL pompously announced that if Arizona voted “no,” it would punish the state by denying it the Super Bowl. And the measure went down 60% to 40%. (The holiday was ultimately approved two years later, 61%-39%, after local business leaders made the NFL promise to keep its big mouth shut.)

Much like the state’s most famous politician, Barry Goldwater, Arizona voters have a powerful defiant streak. They love nothing more than tweaking the noses of outsiders, even if it means cutting off their own in the process.

When McCain died in 2018, his powerful machine died with him, as did the counterweight to the decadeslong grassroots insurgency. Seeing the field surrendered, the embittered contrarians declared victory and took their vengeance.

They censured McCain’s widow, the symbol of the old regime. Sen. Jeff Flake left office two years ago now, but he dared to oppose their champion, Donald Trump. Arizona Gov. Doug Ducey shrewdly befriended both sides of the party, getting along with McCain and Trump as he sailed to a landslide reelection. The Arizona GOP censured him as well.

The key to remaining with the in-party is to hate the out-party. Despite hosting Trump for several rallies in 2020, Ducey rejected the baseless allegations of a stolen election. The most recent Republican to win a statewide campaign, drawing support from GOP, Democratic, and independent voters, was cast out. At that same convention, Chairwoman Ward was narrowly reelected after two rounds of voting.

Several Arizona Republicans are demanding an audit of the state party's leadership election. In an unusual move, local press were barred from the event, and observers weren’t allowed to watch the vote-counting process. After months of “Stop the Steal” rhetoric, Ward is facing election fraud questions of her own. She may survive the challenge, but the fight for the Arizona Republican Party is back on.

Jon Gabriel is editor-in-chief of Ricochet .