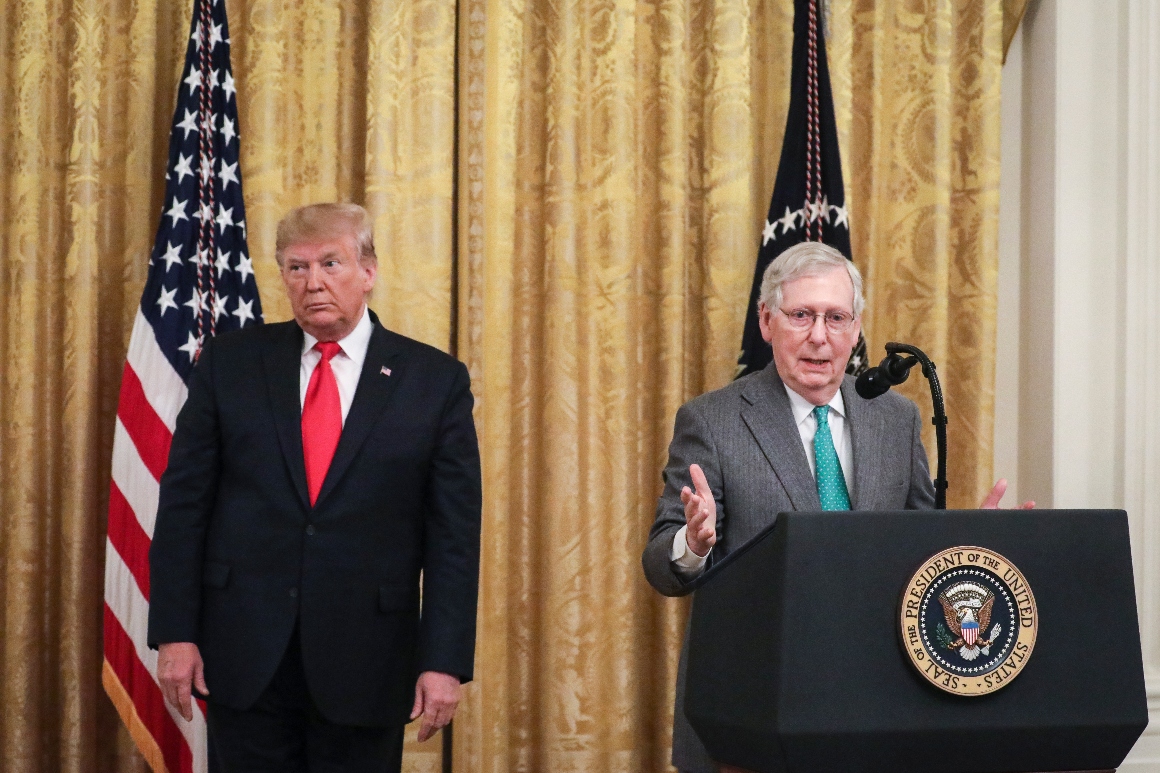 McConnell objected to the constitutionality of convicting a former president. But he also told his caucus that Trump could face criminal prosecution.

McConnell penned a Sunday op-ed in The Wall Street Journal defending his decision, which particularly angered Trump, according to a person familiar with the situation. Trump dictated the Tuesday statement himself, the person said, and the version that went out was toned down from the former president’s original comments. Another source familiar with the situation said Jason Miller, a top Trump adviser, took the lead in writing the final version of the statement.

A person familiar with the crafting of the statement confirmed that it could have been far worse. An earlier draft mocked McConnell for having multiple chins, the person said. But Trump was convinced by advisers to take it out.

“There was also a lot of repetitive stuff and definitely something about him having too many chins but not enough smarts,” the person said.

Miller later told POLITICO he felt the statement could have been tougher but denied ever considering an attack on McConnell‘s appearance.

Trump also met with Brad Parscale, his former campaign manager, on Tuesday, according to two people familiar with the situation.

A spokesperson for McConnell did not immediately respond to a request for comment on Trump’s statement. But in an interview with POLITICO on Saturday evening, the minority leader suggested he was not going to allow Trump to stand in the way of Republicans taking back the Senate majority in 2022. McConnell said that he would be willing to get involved in a GOP primary if the Trump-backed Senate candidate was less likely to win a general election.

“My goal is, in every way possible, to have nominees representing the Republican Party who can win in November,” he said. “Some of them may be people the former president likes. Some of them may not be. The only thing I care about is electability.”

Trump’s statement will almost certainly aggravate the fight among Republicans over the party’s future after Trump’s presidency. While some Trump allies are making it clear they’re sticking with the former president, most Senate Republicans followed McConnell’s lead during the Senate impeachment trial. Even though only seven Republicans voted to convict, the vast majority did not defend Trump’s behavior and instead focused on the legal arguments against a Senate conviction.

In his statement, Trump blamed McConnell for Republicans’ loss in controlling the Senate last year. He cast McConnell as an unpopular and out-of-touch leader who particularly undercut support for Senate Republicans over his objection to $2,000 Covid stimulus checks.

Trump claimed McConnell had “no credibility on China because of his family’s substantial Chinese business holdings.” McConnell’s wife, Elaine Chao, served as Trump’s secretary of Transportation for four years before resigning in the wake of the Capitol insurrection. She came under scrutiny in 2019 for her family’s business dealings in China.

A spokesperson for the Chao family’s shipping business — the U.S.-based Foremost Group — said the family had no business holdings in China, though it leased shipbuilding to manufacturers in Japan and China, which are among the largest shipbuilding countries. Chao herself is not personally involved with the business, he said.

“Foremost Group is an American shipping company, founded and based in New York, with zero holdings in China,” the spokesperson said in a statement to POLITICO. “Neither Secretary Chao nor her husband have any ownership or involvement in Foremost Group, as their publicly available financial disclosures show.”

McConnell was one of Trump’s most prominent backers in Congress, particularly in pushing through the former president’s judicial nominees — one of Trump’s cornerstone legacy talking points. He was a driving force in Trump’s landing three nominees on the Supreme Court — Justices Neil Gorsuch, Brett Kavanaugh and Amy Coney Barrett — through uniquely bitter partisan battles.

“Two words: Federal judges,” a former senior Trump White House official said. “That’s the only positive part of Trump’s legacy, and for that he has Mitch McConnell alone to thank.”

Trump repeatedly attacked Republicans who refused to support his baseless claims of a stolen election. After Georgia’s Republican governor and secretary of state both rejected Trump’s efforts to delegitimize President Joe Biden’s win, Trump took to the rally stage to threaten primary challenges against both.

And when former Vice President Mike Pence refused to reject the election results when presiding over the joint session of Congress to certify the votes, Trump sent out a derisive tweet and Trump-supporting rioters chanted “Hang Mike Pence” as they breached the Capitol.

Sen. Lindsey Graham (R-S.C.), in an interview with Fox News’ Sean Hannity on Tuesday night, said that while the views articulated in McConnell’s post-trial speech were not a “widely shared view of President Trump by most Republicans,” the senator also sided with the minority leader.

“Mitch McConnell was indispensable to Donald Trump’s success,” Graham said. “They’re now at each other’s throats. I’m more worried about 2022 than I’ve ever been. I don’t want to eat our own.”

“My beef is not with Mitch McConnell,” he added. “My beef is that we need to knock this off.”