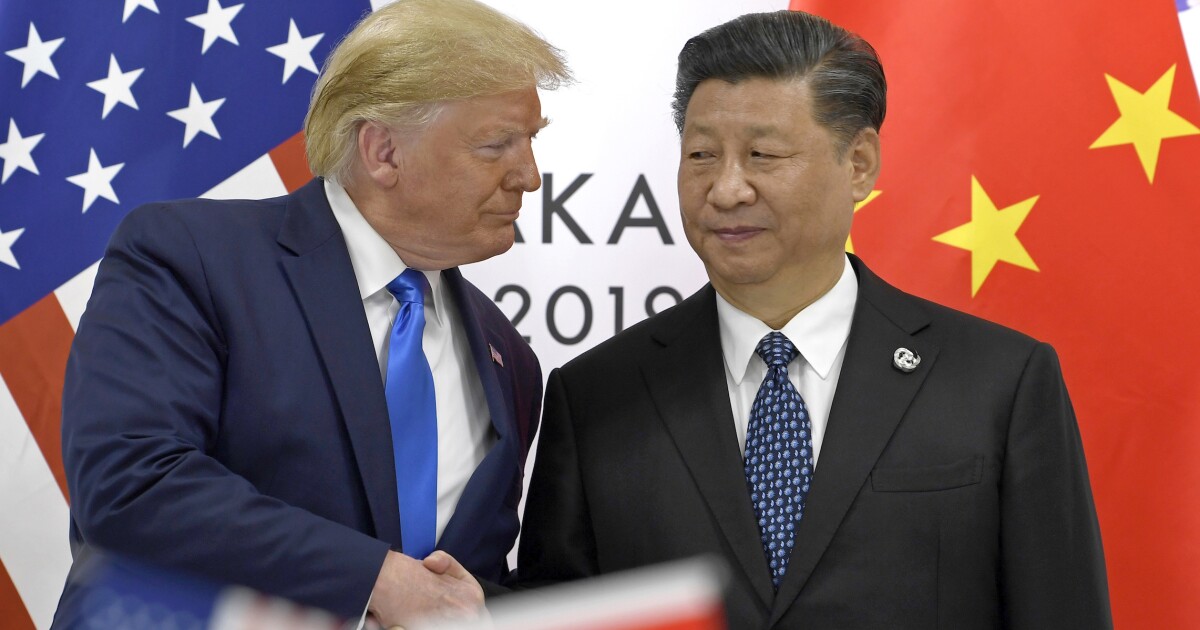 The Trump administration is declassifying unconfirmed intelligence indicating that the Chinese government offered bounties to nonstate actors in Afghanistan to attack U.S. soldiers, the Washington Examiner can confirm, following President Trump being briefed on the claims in recent days.

If true, the bounties would represent a massive escalation by China in its power competition with the United States. Last month, the Washington Examiner learned about the Trump administration’s intentions in its waning days to crack down on China.

The unverified China bounty intelligence was part of the the President’s Daily Brief on Dec. 17, Axios reported, and White House national security adviser Robert O'Brien personally briefed Trump on the uncorroborated intelligence, according to officials cited by the outlet.

A senior official told Axios “the U.S. has evidence that the PRC attempted to finance attacks on American servicemen by Afghan non-state actors by offering financial incentives or bounties” and that the National Security Council “is coordinating a whole-of-government investigation.” The House and Senate Intelligence committees, Biden transition team, and Chinese Embassy did not immediately respond to the Washington Examiner's request for comment.

The revelations come after the New York Times reported in June that a U.S. intelligence assessment concluded Russian military intelligence paid Taliban-connected militants in Afghanistan to kill U.S. and other coalition troops as the Trump administration sought to reach a peace deal involving the Taliban and the Afghan government, but U.S. officials stressed the intelligence was unverified.

Gen. Frank McKenzie said in September that “it just has not been proved to a level of certainty that satisfies me.” The commander of the U.S. Central Command, which oversees Afghanistan, added: “We continue to look for that evidence. I just haven't seen it yet.”

Numerous national security and intelligence officials said this summer that the Russia intelligence was not fully corroborated, and the Trump administration said it was investigating further while also opening a leak investigation. The U.S. believes Russia supplied weapons to the Taliban for years, but bounties would be a significant escalation.

Axios reported Wednesday that NSC officials held a Policy Coordinating Committee meeting on Dec. 22 to discuss the China allegations. One senior official “said the PCC was focused on two objectives, consultation with the IC on attempts to verify initial reports, and consultation in the intelligence and defense communities around the force protection posture for remaining forces in Afghanistan,” the report said. A senior official told Axios that “like all first reports, we react with caution to initial reports,” but “any intel reports relating to the safety of our forces we take very seriously.”

The outlet said, “The source would say only that” the alleged bounty offer “happened some time after late February” but that “administration officials across multiple agencies are currently working to corroborate the initial intelligence reports.” The source told the outlet that the U.S. had also received prior intelligence about “PRC weapons illicitly flowing into Afghanistan.” The Washington Examiner was unable to ascertain specifically when the bounty offers had allegedly been made, but no U.S. troops have been killed in the country since February. Two dozen U.S. service members have been killed in combat in Afghanistan since the start of 2019.

In 2007, Radio Free Europe reported the State Department “complained to Beijing about Chinese weapons shipments to Iran that appear to be turning up in the hands of Taliban fighters in Afghanistan.” The BBC similarly reported that year that “Britain has privately complained to Beijing that Chinese-made weapons are being used by the Taliban to attack British troops in Afghanistan.”

The Afghan Taliban visited China for talks in 2014, a Taliban delegation went to Beijing for peace talks in September 2019, and, in August of this year, Pakistan invited the Taliban and China to the country for negotiations.

The Hindustan Times reported last week that Afghanistan’s National Directorate of Security “has busted a 10-member Chinese module” linked to China’s Ministry of State Security in the capital city of Kabul on charges of espionage and operating a terror cell, according to diplomats and security officials in the country, and the Chinese government “has been trying to persuade” the Afghan government “to hush up the case.”

The Pentagon’s China report from September noted that “since at least 2016, People’s Armed Police forces” from China “have likely operated in Tajikistan, patrolling the tri-border region connecting Tajikistan, Afghanistan, and China” and that “this is likely tied to the August 2016 creation of a quadrilateral counterterrorism coordination mechanism between Afghanistan, China, Pakistan, and Tajikistan to jointly strengthen border security against China’s defined ‘three evils,’ terrorism, separatism, and religious extremism.” The Defense Department said, “PAP forces operating in Tajikistan are from Xinjiang province” and are likely also “exporting its more suppressive approach” to the so-called “three evils.”

Since 2017, as many as 2 million Uighur Muslims and other ethnic minorities have been moved into detention camps, often referred to as concentration camps, in the western Xinjiang province, where they are often subjected to “reeducation” and forced labor. The Chinese Communist Party has reportedly imposed forced birth control, sterilizations, and abortions in a race-based effort to cut the minority Muslim population in the country, though Beijing has rejected such findings from investigations as false.

China has proudly touted its Belt and Road Initiative in Afghanistan, and, in September of last year, Voice of America reported that “China and Russia clashed with the U.S. and other Security Council members … over China's insistence on including a reference to Beijing's $1 trillion ‘belt and road’ global infrastructure program in a resolution on the U.N. political mission in Afghanistan.”

Director of National Intelligence John Ratcliffe told the Washington Examiner this month that the intelligence is “clear” in showing that China is the “greatest national security threat” facing the U.S.