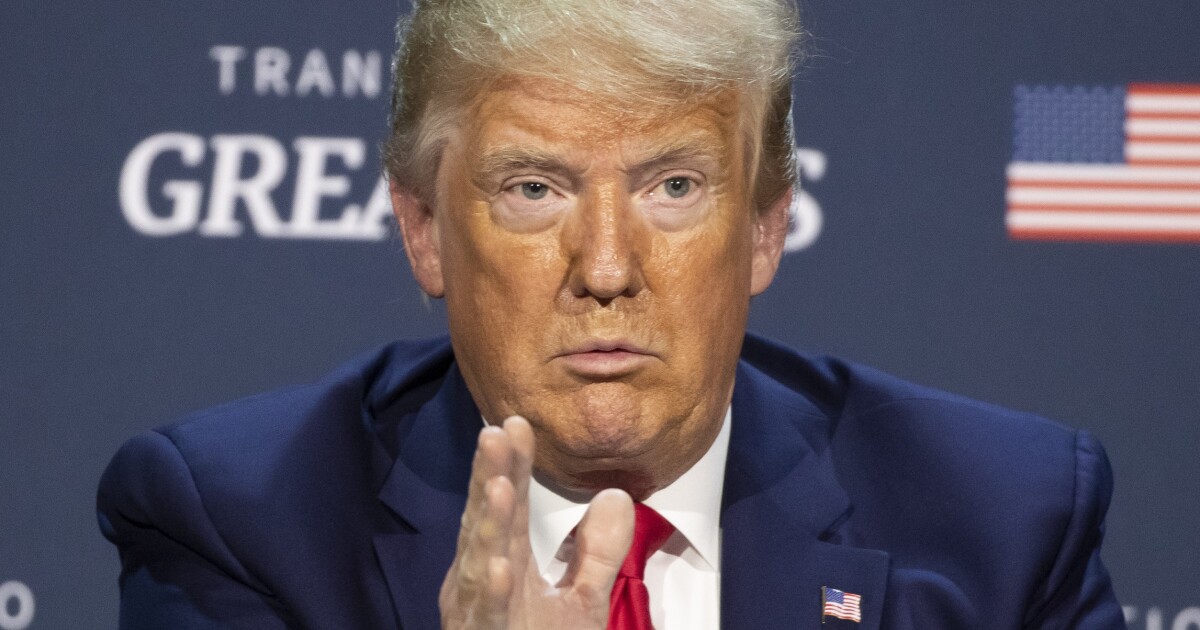 Former President Donald Trump’s legal team called the House Democratic impeachment effort a “violation” of the Constitution as they urged the Senate to toss the case or acquit him in the trial set to start next week.

The response to the trial summons follows the House Democrats filing a lengthy impeachment brief on Tuesday morning arguing that Trump had “singular responsibility” for the storming of the U.S. Capitol and that the Senate should convict him for “incitement of insurrection against the Republic he swore to protect.” The Senate trial is expected to begin next Tuesday, with Democrats and Republicans each holding 50 seats.

The Democratic-led House voted last month to impeach Trump a historic second time on a single article of impeachment, with 10 Republicans also voting in favor of impeachment. Trump has called the impeachment a “hoax.”

“The Senate of the United States lacks jurisdiction over the 45th President because he holds no public office from which he can be removed, and the Constitution limits the authority of the Senate in cases of impeachment to removal from office as the prerequisite active remedy allowed the Senate under our Constitution,” Trump lawyers Bruce Castor and David Schoen said Tuesday, adding that the alleged lack of jurisdiction rendered the article of impeachment “moot.” The Trump legal team also contended that the article of impeachment “violates the 45th President’s right to free speech and thought guaranteed under the First Amendment to the United States Constitution.”

“The House of Representatives deprived the 45th President of due process of law in rushing to issue the Article of Impeachment by ignoring it own procedures and precedents going back to the mid-19th century,” Trump’s lawyers argued. “The lack of due process included, but was not limited to, its failure to conduct any meaningful committee review or other investigation, engage in any full and fair consideration of evidence in support of the Article, as well as the failure to conduct any full and fair discussion by allowing the 45th President’s positions to be heard in the House Chamber.”

The Trump legal team response was co-signed by Castor, a former Pennsylvania prosecutor known for declining to press charges against actor Bill Cosby who went on to serve as Pennsylvania’s solicitor general and briefly its acting attorney general before heading to private practice. It was also co-signed by Schoen, a veteran defense attorney who serves on the board of Zionist Organization of America, represents victims of terrorism in Israel, met with registered sex offender Jeffrey Epstein in jail a few days before his death, and recently represented Trump confidant Roger Stone after his November 2019 conviction.

Trump’s lawyers denied specific claims made within the article of impeachment.

The U.S. Constitution says that “the President, Vice President and all civil Officers of the United States, shall be removed from Office on Impeachment for, and Conviction of, Treason, Bribery, or other high Crimes and Misdemeanors.” Trump’s lawyers contended that “the constitutional provision requires that a person actually hold office to be impeached” and so “the current proceeding before the Senate is void ab initio as a legal nullity that runs patently contrary to the plain language of the Constitution.”

The Congressional Research Service weighed in on the constitutional question earlier in January, saying that “though the text is open to debate, it appears that most scholars who have closely examined the question have concluded that Congress has authority to extend the impeachment process to officials who are no longer in office.”