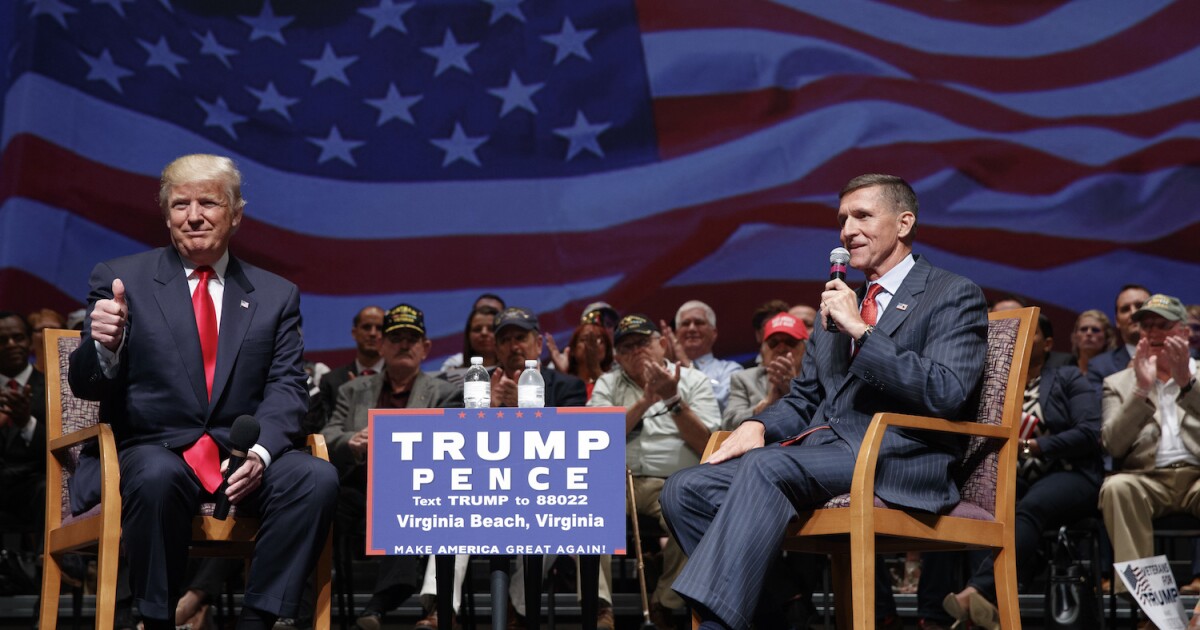 President Trump announced a pardon for retired Lt. Gen. Michael Flynn on Wednesday, seemingly bringing to an end a legal saga that began during the 2016 election amid the FBI's Crossfire Hurricane investigation.

“It is my Great Honor to announce that General Michael T. Flynn has been granted a Full Pardon. Congratulations to @GenFlynn and his wonderful family, I know you will now have a truly fantastic Thanksgiving!” Trump said in a tweet.

It is my Great Honor to announce that General Michael T. Flynn has been granted a Full Pardon. Congratulations to @GenFlynn and his wonderful family, I know you will now have a truly fantastic Thanksgiving!

Flynn, 61, fought to dismiss the government's case against him this year after he pleaded guilty in December 2017 to lying to investigators about his December 2016 conversations with Russian Ambassador Sergey Kislyak related to Russia’s response to the Obama administration kicking Russians out of the United States as retaliation for Russian election interference and related to a U.N. resolution on Israel. The U.S. government intercepted Flynn's discussions with Kislyak, after which now-fired FBI special agent Peter Strzok and FBI agent Joseph Pientka grilled him on the contents of the conversation on Jan. 24, 2017.

Flynn told the court in January that he was “innocent of this crime.” He filed to withdraw his guilty plea after the Justice Department asked the judge to sentence him to up to six months in prison — though, afterward, the department said probation would also be appropriate. The Justice Department later moved to drop the charges in May, following a deep-dive review by U.S. Attorney for the Eastern District of Missouri Jeffrey Jensen. The DOJ said that “continued prosecution of this case would not serve the interests of justice.”

Instead, presiding Judge Emmet Sullivan, an appointee of President Bill Clinton who has handled the Flynn case since December 2017, appointed retired New York judge John Gleeson to present arguments in opposition to the Justice Department’s motion and to explore whether Flynn should be charged with perjury or contempt.

The full U.S. Court of Appeals for the District of Columbia Circuit reversed a three-judge appeals court panel decision in late August and denied Flynn’s effort to have the case against him swiftly dropped. The decision threw the case back to Sullivan, but the appeals court did tell the judge that “as the underlying criminal case resumes, in the District Court, we trust and expect the District Court to proceed with appropriate dispatch.” Sullivan had refused to dismiss it.

“We would have preferred to see if Judge Sullivan would act and for the matter to be resolved in court. We were confident in the likelihood of our success in the case,” DOJ spokeswoman Kerri Kupec told the Washington Examiner. “That being said, this is obviously an appropriate use of the president’s pardon power.”

Kupec also said the Justice Department was not consulted about the decision to pardon Flynn. “We were given a heads-up today,” she said.

Flynn’s lawyers, led by Sidney Powell since last summer, argued in October that Sullivan’s “increasingly hostile and unprecedented words and deeds in what has become his own prosecution of General Flynn mandate his disqualification.” Acting Solicitor General Jeff Wall said in August that the Justice Department “reluctantly” believed that Sullivan might need to be removed because he seemed to have “prejudged” some of the questions in the case. During a September hearing, Powell said she had spoken with Trump to give him an “update” on her client's case and claimed the only request she made was that he “not issue a pardon” to Flynn.

Powell appeared on Fox Business and thanked Trump. She also called the pardon “bittersweet,” claiming that the justice system did not work properly.

In a statement, Flynn's family said it is “grateful” to Trump “for answering our prayers and the prayers of a nation by removing the heavy burden of injustice off the shoulders of our brother Michael, with a full pardon of innocence.”

The upper echelons of the Obama administration learned of the calls between Flynn and Kislyak, and David Ignatius wrote a column in the Washington Post on Jan. 12, 2017, revealing the existence of classified details from those calls, claiming that Flynn “cultivates close Russian contacts,” citing a “senior U.S. government official” who revealed when Flynn talked to Kislyak. U.S. Attorney John Durham is reportedly looking into that Flynn leak, among a host of issues related to the origins and conduct of the Trump-Russia investigation.

The Trump national security adviser resigned on Feb. 14, 2017, for misleading Vice President Mike Pence about his discussions with Kislyak.

Flynn agreed to cooperate with Robert Mueller's special counsel investigation. The defense team that negotiated the plea deal was fired, though, and since taking over last summer, Powell has argued that “there never would’ve been a plea to begin with” if Flynn knew how much information the Justice Department was hiding from him.

Fired FBI Director James Comey admitted he took advantage of the chaos in the early days of Trump's administration when he sent FBI agents over to the White House to talk to Flynn. Records released earlier this year included handwritten notes from Bill Priestap on the day the FBI interviewed Flynn, showing doubts about the strategy being pursued, with the Hurricane leader writing, “What's our goal? Truth/Admission or to get him to lie, so we can prosecute him or get him fired?”

Handwritten notes by Strzok seem to quote President-elect Joe Biden raising the “Logan Act” related to Flynn during an Oval Office meeting on Jan. 5, 2017, according to an apparent conversation Strzok had with Comey afterward. Strzok wrote that Comey said the calls between Flynn and Kislyak “appear legit.” Former President Barack Obama emphasized that “the right people” should look into Flynn.

In interviews this year, Biden contradicted himself on what he knew about the Flynn investigation.

A declassified National Security Agency list of officials who received information in response to “unmasking” requests related to Flynn between Election Day 2016 and the end of January 2017 shows Biden was one recipient.

A draft communication closing the Flynn case dated Jan. 4, 2017, showed the bureau had turned up “no derogatory information” on Flynn. But the same day, texts from Strzok reveal he intervened to keep it open at the insistence of the FBI’s “7th floor” leadership after the bureau obtained intercepts of conversations between Flynn and Kislyak and that Strzok and FBI lawyer Lisa Page discussed the Logan Act.

Internal text messages sent by FBI analysts working on the case against the retired Flynn in 2016 and 2017 reveal doubt inside the investigation into Flynn. William Barnett, one of the lead FBI agents involved with the inquiry into Flynn, believed the case should’ve been closed, and he jokingly referred to the Trump-Russia investigation as “Collusion Clue” and argued that many investigators, including some on Mueller’s team, were out to “get Trump.”

Declassified FBI documents also show the counterintelligence briefing the bureau gave to Trump and his national security team during the 2016 campaign was used as a way to gather investigative evidence on the Trump campaign and Flynn. DOJ Inspector General Michael Horowitz previously testified that this briefing was a “pretext” to help their counterintelligence investigation, a move signed off on by now-fired FBI Deputy Director Andrew McCabe and former FBI General Counsel James Baker.

Mueller’s 448-page report, released in April 2019, said the Russians interfered in 2016 in a “sweeping and systematic fashion” but “did not establish that members of the Trump campaign conspired or coordinated with the Russian government.”

Horowitz’s lengthy 2019 report criticized the Justice Department and the FBI for at least 17 “significant errors and omissions” related to the Foreign Intelligence Surveillance Act warrants against Trump campaign associate Carter Page and for the bureau's reliance on British ex-spy Christopher Steele’s discredited and Democrat-funded dossier. Declassified footnotes showed that the FBI was aware that Steele’s dossier might have been compromised by Russian disinformation.