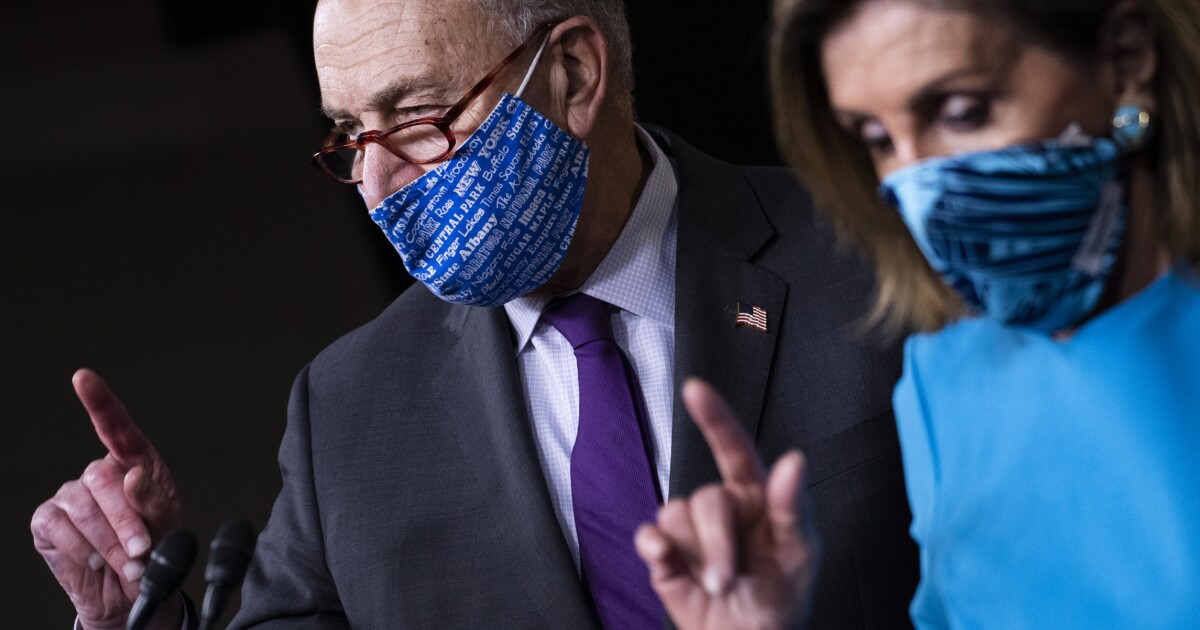 As she walked out of the House chamber Monday night, Speaker Nancy Pelosi took questions from reporters about significant Democratic election losses and her rapidly shrinking majority.

Pelosi, as she paused before entering her Capitol office, was all smiles about the election results.

“Can you just imagine no more Donald Trump? What a joyous feeling that is,” the California Democrat gushed.

Democrats in Congress have never hated a president like they despise President Trump, and they use nearly every press conference and media appearance to criticize his job performance, in particular his handling of the coronavirus, which they blame for the bulk of the 250,000 deaths and the duration of the outbreak in the United States.

But this month, the Trump administration's efforts to enable the creation and distribution of an effective coronavirus vaccine resulted in astounding news. Two companies announced they have developed vaccines with more than a 94% rate of effectiveness and are preparing for mass distribution.

The announcements brought widespread celebration and a soaring stock market.

But top Democrats refused to praise Trump, at least by name, for his efforts to enable a vaccine.

While Pfizer did not use federal funding to help develop its two-dose vaccine, The Trump administration in July secured a contract with the drug giant to purchase 100 million doses for $1.95 billion with the option to buy an additional 500 million doses.

The government provided $1 billion to Moderna to develop its vaccine and purchased 100 billion doses for $1.5 billion. Moderna developed its vaccine with the National Institutes of Health's help, which conducted clinical trials along a faster timeline by aligning protocols for safety and efficacy under Operation Warp Speed.

Unlike the Pfizer remedy, the Moderna vaccine does not require two doses or extremely cold storage, making it the likely candidate for mass distribution.

The president announced the creation of Operation Warp Speed in May, intending to secure 300 million doses of a vaccine by January 2021.

“He gets no credit for that,” House Minority Leader Kevin McCarthy, a California Republican and staunch Trump ally, lamented in an interview with the Washington Examiner.

Democrats shrugged off Trump's efforts to develop a vaccine and explained to the Washington Examiner that they believe Trump is endangering lives by not including President-elect Joe Biden in meetings about how the U.S. will distribute the vaccines.

Trump is contesting the election results and has so far shut out Biden from the traditional briefings and information afforded to an incoming president.

“It's not ultimately going to be a Trump administration that's going to be managing the distribution of this vaccine so that 70% of the American public can get it,” Sen. Tim Kaine, a Virginia Democrat, told the Washington Examiner. “It will be a Biden administration. And locking them out of the door until they walk in on Inauguration Day is almost criminally negligent.”

The Trump administration released a vaccine distribution plan on Sept. 16. The plan would use the Centers for Disease Control and Prevention, with support from the military, to distribute the doses through the McKesson Corporation, which distributed the H1N1 vaccine more than a decade ago.

“CDC is drawing on its years of planning and cooperation with state and local public health partners to ensure a safe, effective, and lifesaving COVID-19 vaccine is ready to be distributed following FDA approval,” CDC Director Robert Redfield said.

But Democrats say Trump has not provided a detailed government plan to ensure that most people have access to the vaccine.

“Who cares if the vaccine exists and people aren't getting it?” said Kaine, a member of the Senate health committee. “That's the key to this thing, and we don't have a plan yet.”

Both parties say the vaccines have become entangled with politics.

Republicans point to statements by New York Gov. Andrew Cuomo and Vice President-elect Kamala Harris that question the safety of a vaccine produced by the Trump administration.

During a radio show on Tuesday, Cuomo said the vaccine trials were perhaps dangerously rushed because of Trump's ego, but he later added that Trump had nothing to do with their successful developments.

Harris questioned the vaccine's safety. During the Oct. 7 vice presidential debate, she said she would not take it if Trump told her to do it.

“That was purely political,” McCarthy said.

Senate Republicans last week celebrated the news of the vaccine. They gave credit to the president and the massive coronavirus aid package created in the GOP-led Senate that was signed into law, which included $100 billion to develop coronavirus testing, treatments, and vaccines.

“When you take a look at the spike that we're seeing in coronavirus cases around the country and around the world, this vaccine truly is the light at the end of the tunnel,” said Sen. John Barrasso, a doctor and Wyoming Republican. “And it's made possible by the commitment of the Republican majority in the Senate and this administration and our efforts to focus on Operation Warp Speed.”