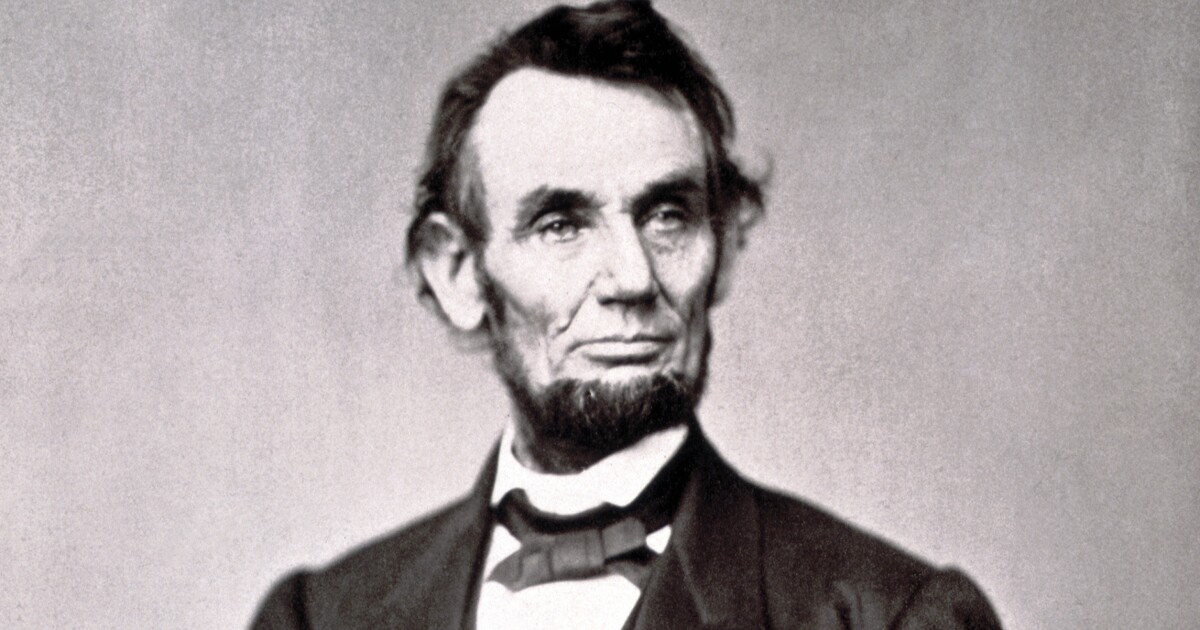 In the 19th century, Scottish historian and philosopher Thomas Carlyle proposed what’s known as the “great man theory” — at root, a belief that history has been regularly determined by the great acts of prominent people. As Carlyle wrote in On Heroes, Hero-Worship, and the Heroic in History (1840), “They were the leaders of men, these great ones; the modelers, patterns, and in a wide sense creators, of whatsoever the general mass of men contrived to do or to attain; all things that we see standing accomplished in the world are properly the outer material result, the practical realization and embodiment, of Thoughts that dwelt in the Great Men sent into the world: the soul of the whole world’s history, it may justly be considered, were the history of these.”

How fortuitous it was, then, that during one of the most difficult periods in its history, America had not one but two great men: Abraham Lincoln and Frederick Douglass.

Brian Kilmeade admires these two titans of liberty and freedom. A recognizable figure on radio and television (Fox and Friends), he’s written several well-received books on Thomas Jefferson, Andrew Jackson, and the Culper Ring, a network of spies during the American Revolution. His newest work, The President and the Freedom Fighter: Abraham Lincoln, Frederick Douglass, and Their Battle to Save America’s Soul, is a penetrating analysis of Lincoln and Douglass's important, life-changing, and sometimes complex friendship.

The march of time has predictably reduced our knowledge and understanding of the relationship between Lincoln and Douglass. Several books, including David W. Blight’s Frederick Douglass: Prophet of Freedom (2018), have brought this vital discussion back to the forefront. Kilmeade’s contribution is to make this period of history come alive. He examined each man’s intellectual journey with respect to civil rights and slavery and how they came together on issues that had separated so many before them.

Lincoln was born in a log cabin (some tales aren’t tall!) in February 1809 in Kentucky. His mother, Nancy, died when he was only 9, although he had a close relationship with his stepmother, Sarah. He regarded his father, Thomas, as a “taskmaster” who treated him like an indentured servant. In fact, Lincoln “attended school only at the rare times when there wasn’t other work to be done,” and due to his father forcing him to work on the farm, he “got less than one full year of formal schooling in his entire childhood, never attending classes after he turned fifteen.”

Douglass had a more difficult upbringing. He was born into slavery either in February 1817 or 1818 in Cordova, Maryland. He never knew his father “beyond the rumor that the White man who impregnated his mother might have been her enslaver, Aaron Anthony, a man he feared and hated.” He worked on plantations and received no formal education. Douglass did form a strong bond with Daniel, the “youngest son of Edward Lloyd V, a former governor of Maryland,” who shared his bread and tutored him after school. As Kilmeade noted, “Daniel’s kindness led Fred to observe many years later that, ‘The equality of nature is strongly asserted in childhood. … Color makes no difference with a child.'”

Lincoln began to learn about law and politics in his formative years. Although he claimed to have “studied with nobody,” his inherent intelligence and ability to communicate in plain language mixed with common sense helped him excel in his legal studies. He also served eight years in the Illinois House of Representatives as a Henry Clay-style Whig with a platform of “improving roads and waterways” and prioritizing the need for education.

Douglass was working on Edward Covey’s farm around that time. The brutal slave owner had a reputation for breaking the spirits (and backs) of black laborers. The young abolitionist-to-be refused to believe he “shall live and die a slave.” He fought back against Covey for nearly two hours in the stable until the slave-breaker, likely fearing his reputation would be ruined, ended it without pressing charges. This was the first example of Douglass having “shifted the balance of power,” according to Kilmeade, and it helped inspire him to cross state lines, escape the shackles of slavery, and become a free man.

Chapter by chapter, The President and the Freedom Fighter witnesses the legend and reputations of Lincoln and Douglass grow.

Lincoln became a political force. He switched to the Republicans in 1854 and would transform into a powerful critic and opponent of slavery. His scintillating and memorable series of debates in 1858 with Democrat Stephen Douglas for the Senate seat in Illinois turned him from gangly politician to trusted leader. Kilmeade correctly noted that while “it was his conviction that slavery must be dealt with as a moral wrong, he was still a man of his time” in that the idea of full racial equality was still a near-impossibility. When Lincoln became president in 1861, that hesitation would disappear.

In contrast, Douglass became an intellectual force in the abolitionist movement. He started the North Star, an anti-slavery newspaper, in 1847 and wrote powerful articles and speeches. He merged his paper with Gerrit Smith’s Liberty Party Paper to form the Frederick Douglass’ Paper in 1852, which allowed him to “continue to opine from the columns of his paper about slavery and American politics.” His close friendship with radical abolitionist John Brown brought him squarely into the crossroads of the raid at Harpers Ferry in what was then still considered Virginia. Douglass had wisely stayed away from the violence, but he briefly became the “most wanted man in America” when correspondence he wrote to Brown was unearthed. It forced him to flee to Canada and England before making his way back to the United States, the Civil War, and a meeting Lincoln.

It goes without saying that Kilmeade’s analysis of the Lincoln-Douglass relationship is the pièce de résistance. Like other authors before him, he focused on what can aptly be described as a fascinating and often complicated meeting of the minds.

“From a distance, Frederick Douglass observed the president,” Kilmeade wrote. “Some of what he saw, he liked; just as often, Lincoln’s words and actions made him angry.” Moreover, Kilmeade wrote that “on Douglass’s good days, he imagined Lincoln might do more to right racial injustice.” But there were bad days, too. While the abolitionist was pleased the president discussed liberty for black slaves, he was frustrated over Lincoln’s inability to move forward with an emancipation proclamation and “free all the enslaved.”

They didn’t meet face-to-face many times, but as we know from Douglass’s memoirs, each time they did, their mutual trust grew.

Their first meeting at the White House in 1863 led Douglass to note that Lincoln’s moniker of “Honest Abe” was a genuine article, noting, “I have never seen a more transparent countenance.” When Douglass thanked Lincoln for protecting black soldiers, albeit in a “somewhat slow” fashion, the latter pointed out that their “bravery and general good conduct” on the Civil War battlefield as patriots and fighters would help overcome existing racial prejudices. When the meeting ended, Douglass realized he had underestimated Lincoln and respected his “earnestness and fluency,” and Lincoln knew he had met with an “adversary and ally” but opened the door to further cooperation, saying, “Douglass, never come to Washington without calling upon me.”

Lincoln and Douglass wouldn’t always see eye-to-eye. There would be further moments of disagreements, distrust, and discontentment related to slavery and civil rights. But as Kilmeade noted, an hourslong conversation during their second White House meeting put everything into perspective. “Despite stark differences, the two men’s backgrounds dovetailed,” he wrote. “Once children of no importance, they had found vastly different routes to prominence. Men of powerful intellect, each possessed gift for words and deep empathy for other men. A friendship, that inexplicable bonding of shared instincts, truly took shape in the White House that day.”

Michael Taube, a columnist for Troy Media and Loonie Politics, was a speechwriter for former Canadian Prime Minister Stephen Harper.