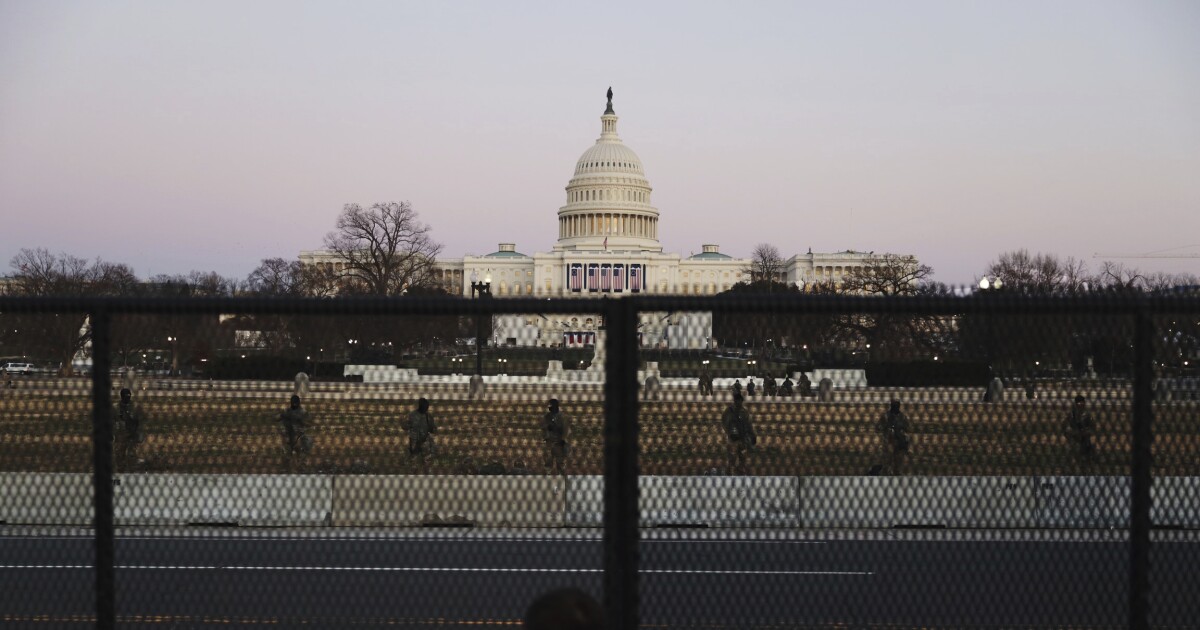 The Justice Department has charged and arrested two off-duty Virginia police officers who went viral online after being photographed with one giving the middle finger in front of a statue in the Capitol building during last week’s siege.

Jacob Fracker and Thomas Robertson, officers with the Rocky Mount Police Department in western Virginia, were charged on Tuesday in federal court in the District of Columbia in connection with the riots at the U.S. Capitol on Jan. 6 and were arrested Wednesday.

The U.S. attorney’s office in the nation’s capital, which is being assisted by the U.S. Attorney’s Office for the Western District of Virginia, said Wednesday that Fracker and Robertson were each charged in a criminal complaint, with “one count of knowingly entering or remaining in any restricted building or grounds without lawful authority” and “one count of violent entry and disorderly conduct on Capitol grounds.” Fracker and Robertson were “photographed in the Capitol building making an obscene gesture” in front of a Capitol statue of John Stark, a major general in the Continental Army during the American Revolution.

Earlier this week, ABC 13 News in Virginia reported that “Robertson said that they were allowed into the building by Capitol Police and also said they walked in through an open door and had two Capitol Police give them water and ask them to stay within roped areas” and that “Robertson said the two remained inside for around 10 minutes.” The outlet quoted Robertson claiming, “There was absolutely no indication that we were anything but welcome to check out certain places. We did not participate in any violence or property damage.”

Vincent Veloz, a special agent with the Capitol Police, wrote in a criminal affidavit that the picture of Robertson and Fracker was taken after 2 p.m. but before the joint session of Congress resumed at 8 p.m., writing that “in a statement to Newsweek, Defendant Robertson admitted that he and Defendant Fracker sent the photo to their police department colleagues, and after it was leaked to social media he reposted it on his own Facebook page.” He noted that “it has also been reported that Robertson stated that he broke no laws, did not know about the violence, and that he had been escorted ‘in’ by the Capitol Police.”

The special agent seemed to throw cold water on Robertson’s claims to the media, writing, “Robertson made these claims notwithstanding his previous posts that he had ‘attacked the government’ and ‘took the f—– Capitol.’ Moreover, at that date and time, the United States Capitol was on lockdown and the defendants’ presence inside was without lawful authority.”

The Capitol Police investigator argued that “there is probable cause to believe that Thomas Robertson and Jacob Fracker” violated the federal code that makes it a crime to “knowingly enter or remain in any restricted building or grounds without lawful authority to do” and to “engage in disorderly or disruptive conduct in … any restricted building or grounds when, or so that, such conduct, in fact, impedes or disrupts the orderly conduct of Government business or official functions.”

Veloz said there was probable cause to think the duo also violated the statute that “makes it a crime to willfully and knowingly utter loud, threatening, or abusive language, or engage in disorderly or disruptive conduct, at any place in the Grounds or in any of the Capitol Buildings with the intent to impede, disrupt, or disturb the orderly conduct of a session of Congress.” The two men could face up to 10 years in prison, though any sentence is likely to be more lenient.

The Democratic-led House of Representatives voted Wednesday to impeach President Trump, with the article of impeachment accusing him of inciting an insurrection last week. The final vote was 232-197, with 10 Republicans voting to impeach the president. The Senate trial will likely not be held until after President-elect Joe Biden has taken office later in January.

Acting U.S. Attorney Michael Sherwin said on Tuesday that the Justice Department opened more than 170 case files related to the storming of the Capitol and that a strike force was also looking into possible charges of sedition and conspiracy, along with specialists exploring charges related to the targeting of law enforcement and the media.

A number of others who participated in the chaos and violence surrounding the Capitol last Wednesday have been charged with federal crimes, including one who was in possession of 11 Molotov cocktails, one who repeatedly punched a police officer in the face and chest, one who was wearing a “Camp Auschwitz” sweatshirt, another who dubbed himself the “QAnon shaman” and was pictured on the Senate dais, and many more.

Capitol Hill Police Officer Brian Sicknick died Thursday night “due to injuries sustained while on-duty” after he was “injured while physically engaging with protesters,” according to Capitol Police. A federal homicide investigation has been opened into his death.

A woman killed by law enforcement, 35-year-old Ashli Babbitt from California, was an Air Force veteran and Trump supporter who was shot while trying to climb over a barricade as a crowd tried to break down a door in the Capitol. Police said three others had various medical emergencies and died during the chaos at the Capitol building and that dozens of officers were injured amid the unrest.