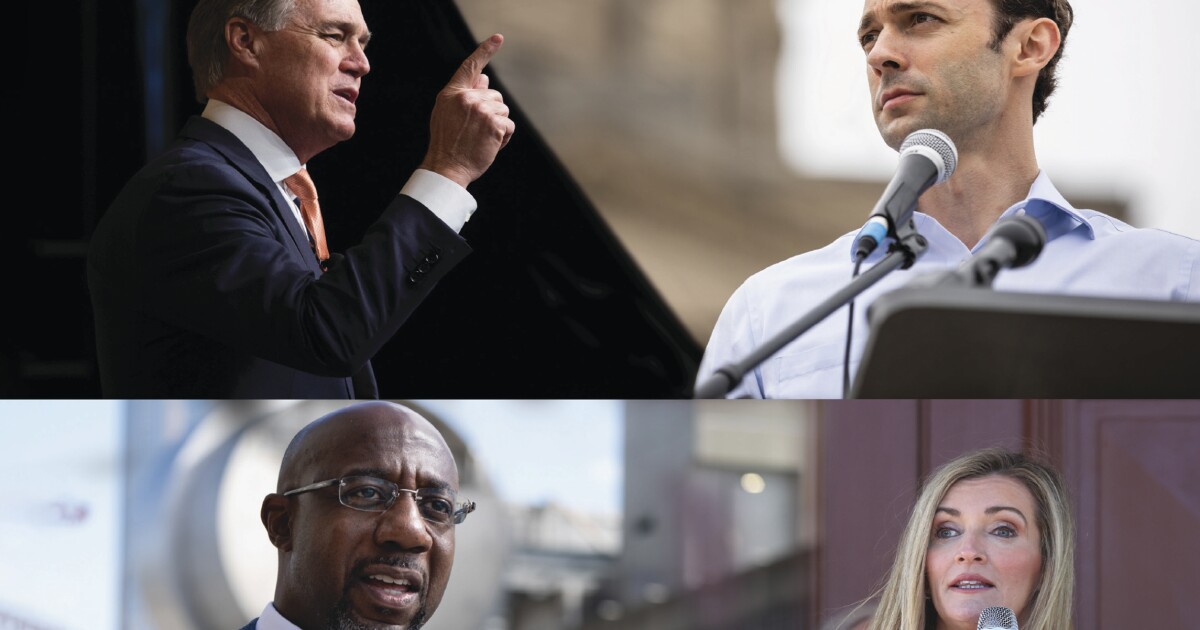 With the GOP majority on the line in a rare pair of runoff elections, Senate Republicans are blanketing Georgia with tens of millions of dollars and thousands of paid staff and volunteers in an aggressive bid to convince voters to pull the lever on Jan. 5 for first-term Sen. David Perdue and appointed Sen. Kelly Loeffler. Simultaneously, President Trump and his supporters, including Perdue and Loeffler, are claiming Georgia's voting system is rife with fraud. It cannot be trusted, they say, in an apparent effort to explain how President-elect Joe Biden became the first Democrat to win the state's Electoral College votes since 1992.

“On Jan. 5, vote for American values by casting your ballot for David Perdue and Kelly Loeffler in another totally rigged election. Your ballot will be turned into compost by corrupt Democratic poll workers who want to steal another election,” declared the voice-over in a parody of a GOP campaign advertisement crafted by CBS's The Late Show with Stephen Colbert.

“So, remember to vote because a vote for Republicans is a vote that's a futile exercise thanks to socialist mailmen canceling your vote with ballots from dead people,” the spoofed television spot continues. “The results won't matter because it's the most important election of our lifetimes. Hanging in the balance is control of the Senate, which Republicans need to check Joe Biden, who will never be inaugurated. Trump won the election by a lot of votes.”

If you're confused, here's a primer:

Having garnered 14,056 votes more than Trump, Biden is poised to win Georgia's 16 electoral votes after an unprecedented hand recount of ballots finishes this month or next. In that same Nov. 3 election, Perdue defeated Democratic challenger Jon Ossoff by 86,637 votes, and Loeffler finished 7 percentage points behind Democrat Raphael Warnock in a crowded special primary election held the same day. Neither Perdue nor Warnock received 50% of the vote, triggering January runoffs that might deliver Senate control to the Democrats.

But Trump claims the election was fraudulent, and Perdue and Loeffler, apparently agreeing, demanded Georgia's top elections official, Republican Secretary of State Brad Raffensperger, resign on the grounds he mismanaged the vote. Republican leaders in Washington, bolstering Trump's assertions, are declining to refer to Biden as president-elect. Perdue and Loeffler, plus the Republican senators and conservative groups parading through Georgia to campaign for them, are imploring voters to back the GOP nominees lest Democrats win the Senate and give Biden a blank check for socialist Armageddon.

Erick Erickson, a conservative writer and talk radio host in Macon, Georgia, said the conflicting message runs the risk of depressing Republican turnout. “There is going to be a segment of the base that thinks if Georgia is going to be stolen by Democrats when Republicans are in charge, why bother?” he said. “For those who internalize that, it's going to be a problem getting them motivated.”

With all Senate races from the November elections settled except the two Georgia runoffs, Republicans hold 50 seats to the Democrats' 48.

The GOP can afford to lose one runoff, but a Democratic sweep on Jan. 5 would cede control of the chamber, based on Vice President-elect Kamala Harris's tiebreaking vote. This dynamic last occurred in 2001 after President George W. Bush was inaugurated, with Republicans ruling a 50-50 Senate because of Vice President Dick Cheney's tiebreaker. A Republican senator switched party allegiances later that year, delivering the Democrats a one-seat majority for the remainder of the 107th Congress.

To hold the line in Georgia, Republicans and their allies are leaving nothing to chance.

The Club for Growth is investing $10 million in the runoffs and leading what it dubs the “Save America” coalition of leading conservative groups in a coordinated effort to push Perdue and Loeffler over the finish line. The National Republican Senatorial Committee, the Senate GOP campaign arm, is even more engaged. The NRSC, in conjunction with the Perdue and Loeffler campaigns, plans to spend tens of millions of dollars more, with expenditures on advertising plus robust field and data programs that include hundreds of ground troops and nearly two dozen regional field offices across the state.

And despite Trump's protestations about the outcome of the presidential election, the campaigns are running on a message that Democratic victories would eliminate the last line of defense in Washington for Republicans and the voters that support them. Senate Minority Leader Chuck Schumer of New York, who declared that “now, we take Georgia, then we change America,” is figuring prominently in GOP talking points. Republicans are confident the pitch will be successful.

“There is a very real consequence to Democrats taking control of the U.S. Senate,” NRSC spokesman Jesse Hunt said. “The only way they can do that, as Sen. Schumer so aptly put it, is if they take Georgia.”

Republicans have history on their side. The winner in round one of a November election for Senate tends to win the runoff. That is what happened in 2008 when then-Sen. Saxby Chambliss, a Republican, was forced into a runoff against Democrat Jim Martin. That bodes well for Perdue. What about Loeffler? The last time a Democratic presidential nominee won Georgia was 1992 when Bill Clinton won the state. That year, Republican Senate challenger Paul Coverdell finished second in the general election but went on to oust Democratic incumbent Wyche Fowler in the runoff. Also, turnout tends to be lower in runoff elections, which also benefits the Republican candidates in a year that smashed turnout records.

Still, after Biden topped Trump and Georgia emerged as a genuinely competitive battleground for the first time in decades, Democrats like their chances. With the Republican message still muddled and Trump dominating the discussion on the right, Democrats are expressing confidence that running on coronavirus competency and protecting Obamacare will resonate with voters just like it did in the presidential race.

“While Republicans are forced to run on a toxic message of fighting against healthcare protections for 1.8 million Georgians with preexisting conditions and stalling on coronavirus relief, Georgia Democrats are focused on issues like expanding access to healthcare and making sure we have an economy that works for all Georgia families,” said Alex Floyd, spokesman for the Georgia Democratic Party.

The shadow hanging over the Olympics