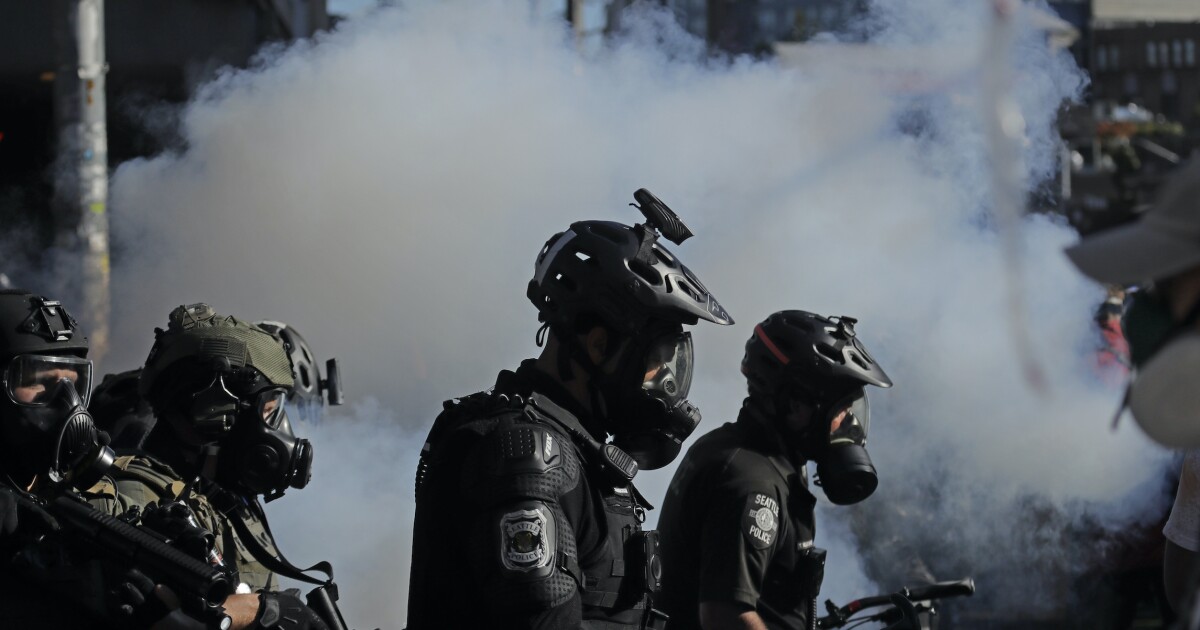 Polls show most Americans want to see an end to the use of neck restraints that killed George Floyd of Minnesota, but Washington activists say new legislation will accomplish the opposite.

Neck restraints, or strangleholds, are promoted by American police as safe ways of rendering suspects unconscious by reducing blood flow to the brain with a carotid restraint compressing two large blood vessels on either sides of the neck. Chokeholds, by contrast, cut off a person's airflow by applying pressure directly to the neck and throat.

Polling from the University of Maryland School of Public Policy last summer showed a majority of voters support ending the practice. Eight in 10 Democrats backed every proposal surveyed and more than five in 10 Republicans supported banning chokeholds and neck restraints.

The bill requires just half of an agency's officers to have “proper training” on the tactic and stops short of banning them—a prospect some civic activists see as a blank check for perpetuating police violence.

Sakara Remmu, emeritus chair of Black Lives Matter Seattle-King County, characterized the bill as an insult to what protesters against police brutality and racism have called for across Washington for nearly a year.

“People have not called for better training on the use of chokeholds,” Remmu said. “We are not interested in empowering law enforcement to kill us more efficiently or more uniformly across the state. This is a deadly use of force tactic by another name.”

Activists have pointed to law enforcement's liberal use of the tactic as reason to ban it, as exemplified by a Seattle police officer who knelt on a protester's neck last summer in front of a gathered crowd.

Tracking any use of force by police is hard in states like Washington where no public databases on such incidents exist.

According to the King County Sheriff's Office, which polices Washington's most populous county, neck restraints accounted for 1% of all uses of force between 2014 and 2019. Black individuals, who make up 7% of Washingtonians, were involved in 29% of those uses of force.

A bill in the Washington Legislature sponsored by state Sen. Manka Dhingra, D-Redmond, would create such a database whose funding is still up for debate.

Spokane Police Chief Craig Meidl pointed to the city's online police use of force dashboard as a model for what the bill aims to create, but cautioned that setting one up in smaller cities might be a different ballgame.

“Transparency costs money,” Meidl said. “All of these things add up and we’re well situated here, but a lot of smaller agencies may struggle with staff and resources.”

“The point is every time you take a tool out of the toolbox for law enforcement, what's left in the toolbox?” Padden said. “You take out, in my mind, vascular neck restraints, and then you have the next item, a stun gun, a baton, or worse yet, deadly force.”

A study published in JAMA Neurology by neurologists at Massachusetts General Hospital found carotid compression can commonly induce stroke, seizure, and death with as little as 13 pounds of force or the weight of a house cat.

Democratic-backed legislation voted out of committee last week, House Bill 1054, totally bans neck restraints on the grounds they cannot be used safely in an uncontrolled environment. It has been referred to the House Rules Committee for review.

In the meantime, Senate Bill 5094 is slated for a second hearing in the Senate Law and Justice Committee on Thursday at 10:30 a.m.