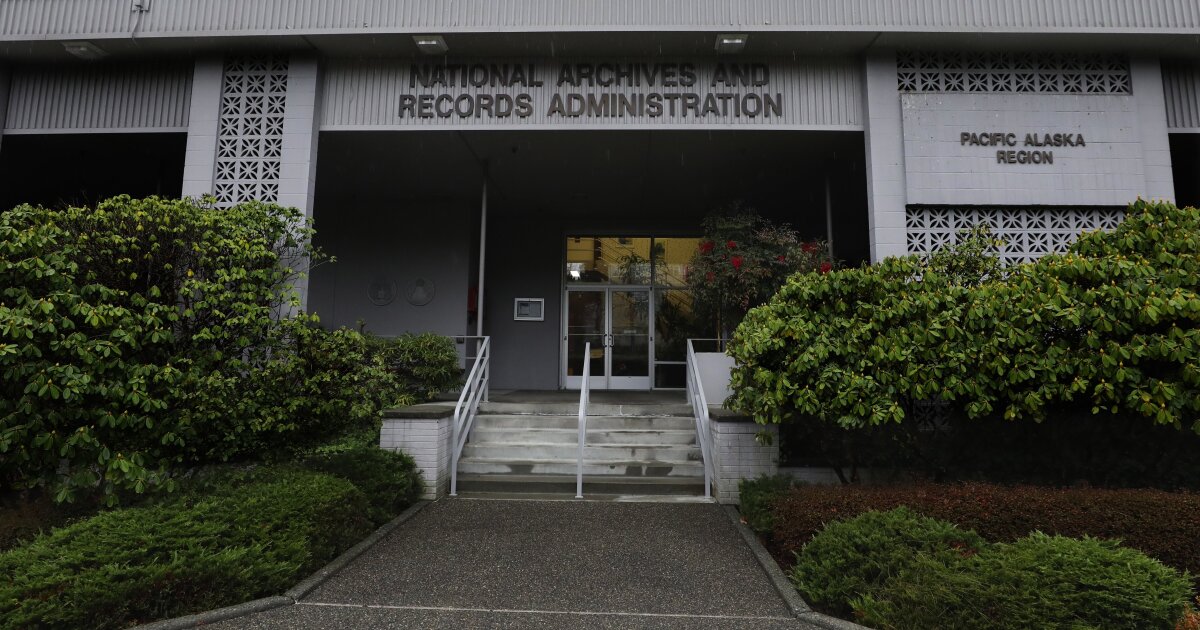 Washington, Oregon, and 29 indigenous tribes are suing the federal government for selling what community organizations call a “treasure trove” of Pacific Northwest history.

Virtually all of the aging records are not digitized, court documents state, with fewer than .001% are available online.

Seattle's National Archives building was listed as a “High Value Asset” in 2019 along with a dozen other federal properties slated for sale by the Public Buildings Reform Board.

The records will be sent to two separate National Archives sites in Kansas City, Missouri and Riverside, California.

Sixteen Democratic and Republican members of Congress from Oregon, Idaho, Washington, and Alaska voiced opposition to the sale in a joint letter back in January 2020.

Ferguson claims his public records requests concerning the building's proposed sale around that time were left unfulfilled and spurred a $65,000 fee for record redactions from the PBRB.

He says the PBRB has informed his office the requested records will take until March 31, 2021 to produce.

“To be blunt, these federal agencies don’t give a damn about their legal obligations or what these documents mean to our region,” Ferguson said. “Consequently, this lawsuit is our only recourse to compel the government to follow the law and respect the fact that these irreplaceable records contain the DNA of our region.”

In response to the agencies’ refusal to comply with Ferguson’s records request, he filed four Freedom of Information Act lawsuits by September 2020.

Those lawsuits yielded a handful of related documents from four federal agencies which produced heavily redacted records, according to court documents.

By October 2020, the PBRB announced in a 74-page meeting record that it would advance the sale of Seattle's National Archives Building and 11 other federal sites due to the economic downturn of the national real estate market.

On Monday, Washington filed a joint lawsuit against federal authorities in U.S. District Court, claiming the National Archives building's expedited sale is illegal based on its relation to “agriculture, recreational, and conservation programs.”

It also claims the sale violated various administrative protocol and did not seek testimony from tribal governments and other stakeholders.

On Tuesday, Ferguson was granted a motion by U.S. District Court Judge Robert Lasnik granting him access to all requested non-exempt records related to the sale within 21 days.

The lawsuit names nine community organizations as plaintiffs who say the sale of the building would deny Pacific Northwest communities access to their history.

“The word ‘archives,’ from the view of law firms, businesses and courts, tends to conjure an image of a records storage facility for ‘dead files,’” said Tallis King George, a Puyallup tribal attorney. “A visit to the National Archives at Seattle, for native people whose ancestral historical and cultural records are housed there, fills a deep cultural yearning to know, honor and understand the lives and sacrifices of their ancestors.”

Among the files stored at the building are some 50,000 documents related to the Chinese Exclusion Act of 1882 which forced Chinese immigrants to go through a discriminatory application process meant to curb Chinese migration.

“The Archives are critical partners in the conservation of our community’s history,” said Connie So, president of OCA Asian Pacific Advocates – Greater Seattle Chapter. “Most Chinese Americans left few records of their lives and history prior to 1950, making the Archive’s treasure trove of files related to the Chinese Exclusion Act all the more precious.”

The sale of the National Archives Building is in the middle of the bidding process which plaintiffs are seeking to block in court as the lawsuit awaits review.