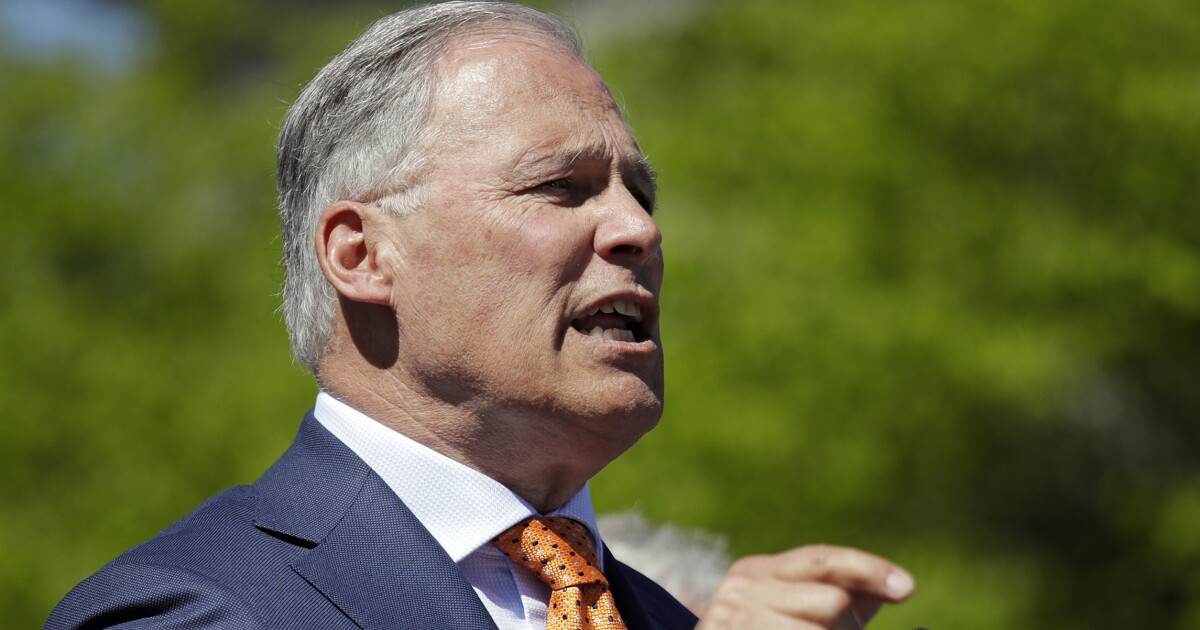 Washington state Republicans say they are losing patience with Gov. Jay Inslee and are considering legislation to limit his emergency powers in lieu of solutions to the state’s housing crisis.

On Friday, members of the Washington Republican House and Senate caucuses said such legislation could include placing a word count on gubernatorial proclamations and mechanisms for triggering a legislative session 30 days after a proclamation is issued.

“We need to find a way that incorporates all branches of government, or at least the legislative branch of government, in a better way,” Senate Minority Leader John Braun, R-Centralia, said.

For months, Republican state lawmakers have derided what they have described as Inslee’s partisan attempt to monopolize the state’s response to the pandemic and his irresponsiveness to struggling landlords.

Washington Republicans repeated their calls on Friday during a virtual press briefing for Inslee to convene a special legislative session before the year’s end to pass long-term housing relief.

Among the ideas discussed by Republican lawmakers included offering property tax credits and deferrals for rental properties where at least half of all tenants owe back rent.

Rep. Drew MacEwen, R-Union, said individual one-time payments like those disbursed by Oregon lawmakers earlier this summer are not in the cards.

“We’re not like the federal government,” MacEwen said. “We don’t have the ability to print checks and do a direct stimulus to our constituents. But we can take measured relief that does have a meaningful impact and hopefully save a number of businesses.”

Inslee shot down the prospect of convening a special session some weeks ago while pointing to his own efforts to disperse aid during the state’s ongoing shutdown which ends on December 14.

In November, the governor announced a $135 million aid package which included $70 million in business grants and $30 million for rental assistance more than two weeks ago.

The Washington Department of Commerce has not disclosed when that aid is expected to be disbursed to Washington counties.

“I believe in COVID 100%,” said Rep. Gina Mosbrucker, R-Goldendale. “I have colleagues and friends that have COVID. But if you look across the state of Washington, in your own communities, there's open storefronts more than we've ever seen.”

Washington Republicans on Friday also voiced interest in tapping the state’s $1.8 billion in cash reserves to pay for the state’s unemployment insurance fund in anticipation of layoffs during the shutdown. In November, the fund stood at $2 billion—down from $3.3 billion in October.

In the past few months, state economists’ revenue forecast for the state have only grown rosier. In June, revenue through 2023 was expected to fall by $9 billion, but by September, that number had been reduced to $4.5 billion.

Jason Mercier, director of the Center for Government Reform at the Washington Policy Center, shares economists' optimism and argues that tax hikes and big budget cuts should not be necessary in 2021.

“If we were having this conversation back in June, it was very different when you were showing almost a $9 billion shortfall over three years,” Mercier said. “That’s not the case anymore with the way the economy has recovered with the loosening of the economic restrictions. You've got revenues growing every year, despite the pandemic and we're still showing strong stable revenue. This is not the Great Recession.”

Republicans on Friday also floated the idea of lifting some of the state’s health restrictions on restaurants, saying they trusted citizens and business owners to take the right precautions.

“I don't question the governor's operating in good faith to try to solve a legitimately hard problem, the surge, and make sure we don't get out of control,” Braun said. “What I think we need is a more balanced discussion and a more selective effort right now and basically follow the data we have. It's our state government that's come up with it by and large, the data says, restaurants aren't the major cause.”

Restaurants and food service establishments lead the Washington Department of Health’s list of COVID-19 workplace outbreaks with 188 cases to date.

The department still reports that many infections occur from social gatherings such as in King County where as much as a third of COVID-19 cases have involved household get-togethers.

“I've said many times, that if I was the governor, I think I would want more people involved in this because the things that are required now require buy-in from all parties,” Wilcox said. “And when you don't have participation, it is much, much harder to have buy-in. We still got some time to do this.”

Inslee’s deadline for submitting his 2021-2023 budget proposal is December 20.