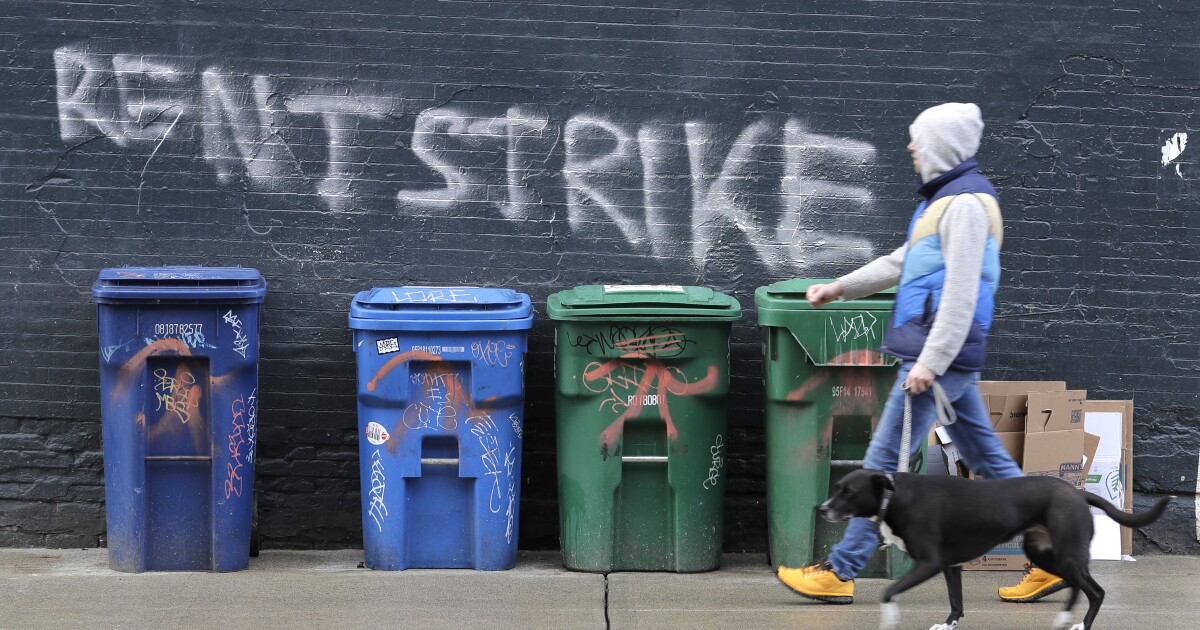 Washington state landlords and tenants are demanding financial relief as more property owners challenge Gov. Jay Inslee's authority ahead of his eviction moratorium's expiration by the end of the month.

A lawsuit filed in Lewis County Superior Court on Tuesday by the Washington Business Properties Association takes its arguments a step farther than prior legal challenges against the governor.

It claims landlords are entitled to injunctive relief from the moratorium as well as financial compensation from the state.

Two lead plaintiffs in the lawsuit, Sue and Dan Horwath, rent out several homes in Lewis County and allege one tenant has not paid their electric bill for months, placing the property at risk of receiving a lien from the utility company.

Electric and natural gas companies in Washington were ordered by the state to stop disconnections for non-payment through April 30, 2021.

Another plaintiff, Susan Gonzalez, rents out properties in Lewis County with her husband and took on three jobs after losing her position as a middle school math and science teacher.

She alleges in court documents that their tenants refuse to pay rent while another is responsible for costly property damage.

Under the eviction moratorium, tenants are not protected from eviction for property damages or felony offenses.

Plaintiffs go on to claim that Inslee overstepped his constitutional authority by issuing the moratorium without legislative and judiciary input.

The state law under which the moratorium operates, plaintiffs argue, requires the state House speaker and Senate majority leader to extend a gubernatorial emergency proclamation after 30 days.

Plaintiffs allege that the state has kept the judiciary from exercising its lawful role in resolving disputes concerning rent payment and lease violations.

They argue the state has required landlords to provide free goods and services, “essentially mandating that their property be used for private use by tenants” in violation of Washington's eminent domain laws.

“Plaintiffs are sympathetic to tenants who have actually suffered hardship due to the COVID-19 Pandemic,” the lawsuit states. “However, the Proclamations actively undermine any such attempts at cooperation and allow tenants who have the ability to pay all or some of their rent to ignore and ultimately escape their contractual obligations of the foreseeable future regardless of whether they have been financially harmed by the Pandemic.”

Robert, a Washington landlord who rents out a housing complex in SeaTac, tells a similar story.

He says six of his tenants owe him more than $65,000 in back rent combined, two of whom were in the process of eviction before the moratorium began.

Robert insists many of his tenants have the means to pay and says he has not paid his own electric bills since around April.

“They give you the same old stories, the whole ‘Somebody is working, somebody will call you,’ this and that,” Robert said. “Eventually they start shutting doors and just don't want to face me. It's just like nobody listens to no small landlords like us. We also have bills to pay.”

Tenants and landlords do agree that the eviction moratorium is unsustainable.

The Tenants Union of Washington State has demanded the state cancel all outstanding rent payments, late fees, and mortgages along with a rent freeze through 2022.

Sarah Stephens of Cheney, Washington moved in search of work from West Virginia where she owned a home six years ago. Paying $1,000 in monthly rent herself, she says it's not hard to see why tenants are struggling in her adopted state.

Stephens was among more than 27,000 people in the state to lose their jobs when businesses were first hit by the pandemic in March.

A part-time sales consultant working at Costco, Stephens then fell back on her second job as an ESL teacher and took up work as a part-time delivery driver.

She and her husband, a truck driver for a local non-profit, are making ends meet and says they have always paid their rent on time despite having little saved.

“We will never not pay our rent,” Stephens said. “That is foolish and irresponsible. I find it hard to believe that many people would risk everything like that.”

In its survey of 11.5 million apartment units nationwide, the National Multifamily Housing Council found 90.3% of apartment renters made a rent payment by November 20.

For Stephens, the state's housing crisis boils down to what she calls “repulsive” rent prices.

In Seattle, the median rent for a one-bedroom apartment was $1,482 and $1,849 for a two-bedroom—almost $500 above the national average—according to Apartment List.

Experts are divided on just how many Americans are at risk of eviction in 2020.

The King County Bar Association reported that 176 people in King County have been evicted during the COVID-19 pandemic.

Seven of those evictions were for non-payment while another 58 were the result of landlords deciding to sell or occupy a property—a privilege landlords were granted in June under the condition they give 60 days notice to tenants.

A U.S. Census Household Pulse Survey from November found that as many as 27% of Washington residents are at risk of eviction or foreclosure.

Without Inslee's signature, the state's eviction moratorium will end on December 31 alongside its federal counterpart, leaving landlords and tenants with even more uncertainty in the new year.