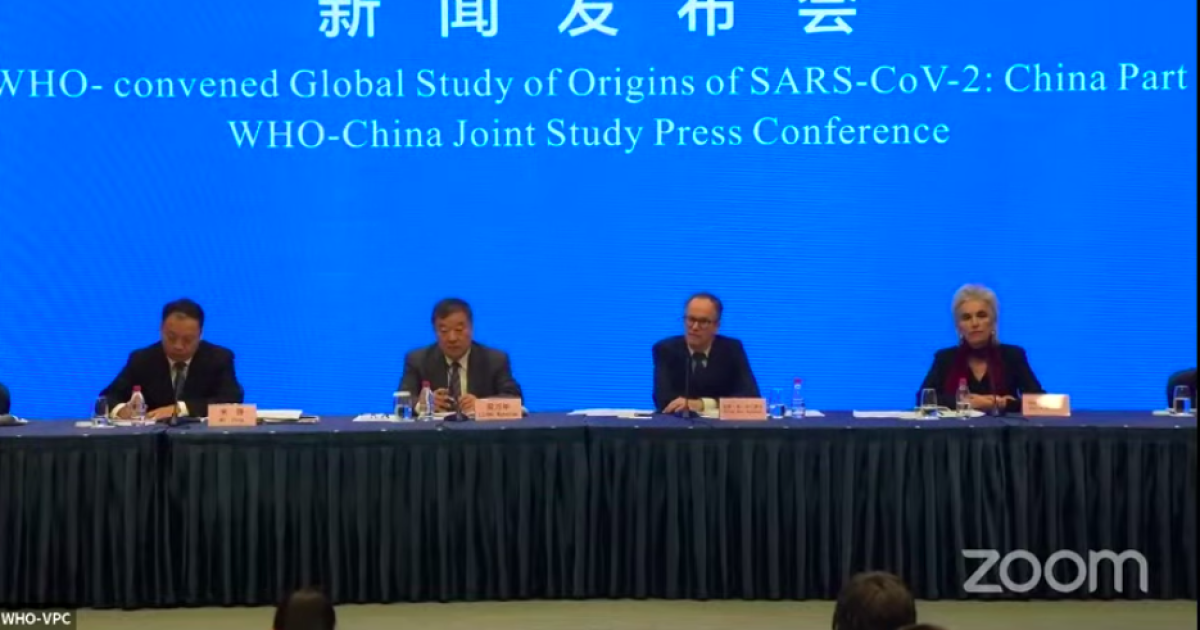 The head of the World Health Organization team investigating the origins of COVID-19 suggested the WHO would not continue investigating the hypothesis that the coronavirus escaped from a Wuhan lab, deeming it an “extremely unlikely” possibility.

China had long done its utmost to thwart investigations into the origins of the virus, which subsequently turned into the pandemic that has killed 2.32 million people around the world, and the Trump administration withdrew from the WHO in 2020, claiming that the United Nations agency was incompetent and influenced by China, although the Biden administration rejoined it.

A WHO joint investigation with Chinese officials was conducted over the past couple of weeks.

Dr. Peter Ben Embarek, the head of the visiting WHO team in Wuhan and a WHO program manager specializing in food safety and animal diseases, announced at a press conference on Monday that the WHO had considered four main hypotheses on the pathway for the virus to be introduced to the human population: direct transmission from an animal species to the human population, transmission through an intermediate host species, transmission through the trade of cold-chain products or frozen foods, and a “laboratory-related incident.”

He said a jump from an animal to another animal to humans was the most likely infection vector, and he also claimed that an accidental release from a Wuhan lab was extremely unlikely, indicating that the possibility wouldn’t be further scrutinized.

“Our initial findings suggest that the introduction through an intermediary host species is the most likely pathway and one that will require more studies and more specific targeted research,” Embarek said. “However, the findings suggest that the laboratory incident hypothesis is extremely unlikely to explain the introduction of the virus into the human population and, therefore, is not a hypothesis that implies to suggest future studies into our work to support our future work into the understanding of the origin of the virus.”

Matthew Pottinger, a former Trump deputy national security adviser who resigned in the wake of the Capitol riots, said in December 2020 that “there is a growing body of evidence to say that a laboratory leak or accident is very much a credible possibility” and that “even establishment figures in Beijing have openly dismissed the wet market story.”

Of particular concern has been the Wuhan Institute of Virology, a biosafety level 4 lab in China that researches infectious diseases, including bat coronaviruses.

Embarek said on Monday that “we looked at what are the arguments for and against such a hypothesis” and added, “Yes, accidents do happen. Unfortunately, we have many examples from many countries in the world of past accidents so, of course, this is not impossible.” However, he contended that it was unlikely in this instance.

“We, in terms of arguments against, look at the fact that nowhere previously was this particular virus researched or identified or known,” Embarek said. “We were also discussing with the managers and the staff of many of the relevant labs in the region. … We also looked, for example, at the Wuhan Institute of Virology BSL-4 … and it was very unlikely that anything could escape from such a place. And we also know that when lab accidents happen, they are, of course, extremely rare.”

“All the work that has been done on the virus and trying to identify its origin continue to point toward a natural reservoir of this virus and similar viruses in bat population,” Embarek said, though he acknowledged that Wuhan isn’t close to these bat populations so a direct natural jump from bats to humans was unlikely.

Pottinger told the Inter-Parliamentary Alliance on China that “[members] around the world have a moral role to play in exposing the WHO investigation as a Potemkin exercise” — meaning an impressive facade designed to hide undesirable facts, a reference to stories of a fake village constructed to impress Catherine the Great.

Liang Wannian, the head of the Chinese team that worked with WHO and a member of China's National Health Commission, focused heavily on the possibility that the coronavirus was introduced to humans through frozen food products — a theory heavily promoted by the Chinese Communist Party after Chinese diplomats early on also pushed baseless claims that the disease originated with the United States military.

“The work of the joint international team will set the ground for origin tracing work elsewhere,” Wannian said. “The global origin tracing work would therefore not be bound to any location and may evolve geographically as evidence is generated and science-based hypotheses evolve.”

U.S. officials have “reason to believe” that Chinese researchers at the Wuhan Institute of Virology caught the coronavirus months before it developed into a pandemic, according to former Secretary of State Mike Pompeo, who added that all evidence indicates that the coronavirus began in China.

“The United States government has reason to believe that several researchers inside the WIV became sick in autumn 2019, before the first identified case of the outbreak, with symptoms consistent with both COVID-19 and common seasonal illnesses,” Pompeo said in mid-January. “This raises questions about the credibility of WIV senior researcher Shi Zhengli’s public claim that there was ‘zero infection’ among the WIV’s staff and students of SARS-CoV-2 or SARS-related viruses.”

Richard Ebright, a professor of chemistry and chemical biology at Rutgers University, told the Washington Examiner in January that COVID-19 arising in nature or escaping through a lab accident were both plausible. Republican Sen. Tom Cotton told the Washington Examiner last month that “circumstantial evidence points to the Wuhan lab, where accidental release remains the most likely scenario, but we cannot rule out other origins, including a natural transmission.”

Wannian claimed on Monday that “the hypothesis of lab leak is put into the matrix of ‘extremely unlikely’ as a conclusion of the research outcome of the joint expert team” and added that it couldn’t have leaked from the Wuhan lab because there was no known existence of COVID-19 in the lab.

Embarek said the conclusion dismissing the Wuhan lab leak hypothesis stemmed from “long, frank, open discussion with management and staff” at labs, including the Wuhan Institute of Virology, which he claimed produced “detailed descriptions of the center’s research, both present and past, on all the projects involving bats and coronaviruses and so on, also some of the more advanced projects.”

The Wuhan lab’s leadership and staff “are the best ones to be able to dismiss any of these claims and provide answers to all the questions that are out there,” he said, adding that minutes of the meetings with the Wuhan labs would be part of the WHO’s report, which hasn’t been released yet.

U.S. Embassy officials in China raised concerns in 2018 about biosecurity at the Wuhan Institute of Virology. One “sensitive but unclassified” State Department cable warned about a “serious shortage of appropriately trained technicians and investigators needed to safely operate this high-containment laboratory.”

The cable also mentioned meeting with Shi Zhengli, the head of the coronavirus research effort at the Wuhan lab, known as “batwoman” for her yearslong research related to diseases in bats.

Shi originally “wondered if [the municipal health authority] got it wrong,” she told Scientific American. She admitted asking herself, “Could they have come from our lab?”

But the magazine said she “breathed a sigh of relief when … none of the sequences matched those of the viruses her team had sampled from bat caves.” Shi told Chinese state television in August that “there could not possibly have been a lab leak.” Viruses have escaped from Chinese labs in the past.

A senior intelligence official told the Washington Examiner in May 2020 that a majority of the intelligence community's 17 spy agencies believed the coronavirus likely originated with an accidental lab escape from a Wuhan lab. The Office of the Director of National Intelligence weighed in that month, noting that “the Intelligence Community also concurs with the wide scientific consensus that the COVID-19 virus was not manmade or genetically modified.”

GOP Rep. Michael McCaul, the ranking member on the House Foreign Affairs Committee, released a report in September 2020 on the coronavirus, concluding that “the CCP’s lies, cover-up, and oppression of whistleblowers cost thousands of Chinese citizens and hundreds of thousands of others around the world their lives.”